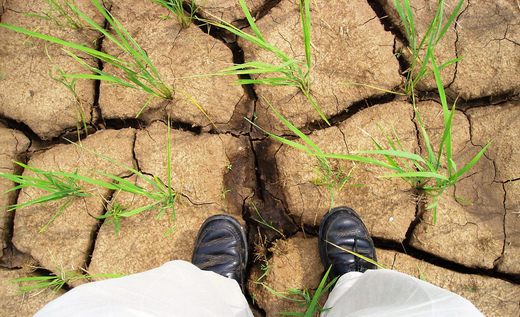 The Moon is in Aquarius today, moving toward sextiles with Saturn and Uranus. Meanwhile Mars has entered Sagittarius and the Sun is moving into an opposition with Jupiter.

A few more interesting things to consider about the upcoming eclipse:

* The upcoming eclipse will take place in Jupiter’s sign, and Jupiter is engaging both Saturn and Neptune as well as the Sun and the Moon. With Jupiter in the dry earth sign of Virgo, opposite Neptune, the contrast between water and earth is highlighted. The idea of the lack of water or of something fluid drying up comes to mind, as does the idea of challenges or difficulties related to sailing, the oceans or waters, drought, etc.

* On Skyscript, Deb Houlding mentions the following themes related to eclipses in Pisces: “Eclipses in Pisces bring misfortune to the sea and the fishing industry, corruption of the coastline, loss of fish and the draining of rivers. The death of some illustrious man is foreshadowed, the immoral actions of men connected to the Church or the Law will be revealed, and all lawyers or men of religion will suffer. (Northern Egypt)”

* On the other hand, Houlding mentions the following significations for an eclipse ruled by Jupiter (though remember that Jupiter is in his detriment in a dry/earthy/cold sign and he is also retrograde at the moment): “Jupiter ruling the eclipse indicates peace, prosperity, fertility, happiness and abundance. Bodily and spiritual health is improved, the population is increased, laws are executed with justice, and there is generosity from governments to people. The weather is beneficial for farming with a predominance of temperate, moist winds and gentle showers.”

The important thing to remember in this eclipse given the mixed significations above is that while a Jupiter ruled eclipse might normally bring some brighter or more temperate and life supporting themes, Jupiter is currently in a sign whose qualities are contrary to his own. He is also in hard aspect to Saturn and Neptune and the eclipse itself. This is why we might see some challenges regarding those things that support us most basically…resources, food, health, money, water, faith, friendships, etc. However, from every crisis of faith, from every shortage, loss, or setback, we can also relearn the values of modesty, simplicity, and purity or devotion. Though we might not be monks or nuns, the vow of poverty is sometimes more than an oath or promise we make to the higher power anyway. Sometimes the vow of poverty is an organic everyday response to the simple fact that nature herself takes away, dries up, and removes or diminishes something. And where one thing decreases then something else, perhaps something completely unexpected, eventually has the room to increase and grow.

Being humbled isn’t always about punishment or wrong doing or karma. We sometimes perceive humbling experiences as things that were somehow aimed at us personally, when in fact mountains simply crumble and erode, and it’s not because they weren’t nice people. High things are made low, bubbles are burst, and nature doesn’t take it personally. In fact it just keeps moving, changing, growing, and dying. Sometimes people respond to difficult predictions in astrology as though “with personal/conscious effort I can avert the negativity.” And while our consciousness is certainly an important part of how we respond to celestial signs, it’s also good to remember that much of the time what’s being signified truly isn’t personal. It’s about forces that are simply larger than our personal choices.
​
Prayer: Help us to approach this upcoming eclipse cycle with modesty, acceptance, and simplicity. Help us to trust that decrease and increase are intimately related.