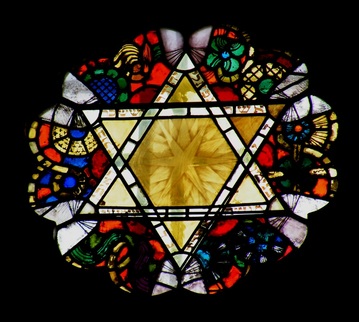 Today a special meditation on Saturn/Neptune, including the subject of demons, the nature of signs and omens, and the recent Donald Trump Star of David tweet.

Let’s start with a brief restatement of the Saturn/Neptune dynamic. Saturn represents limits, death, old age, restrictions, concrete facts and concrete thinking, discipline, realism, time, things from the past, etc. Neptune, on the other hand, represents the imagination, dreams, images, illusion, fog, ideals and idealism, the ocean, fantasy, and the sublime.

This past weekend, on the same day that the beloved Jewish peace activist Elie Wiesel passed away, Donald Trump tweeted an antisemitic image of the Star of David. The tweet was deleted within a few hours, and the Trump campaign has since insisted that the image was not intentionally antisemitic. The past few days of media coverage has thus focused in large part around the issue of whether or not the image was “consciously intended” to be antisemitic or if it was actually just a mistake, as Trump claims it to be.

In astrological terms, this sequence of events couldn’t be more indicative of the Saturn/Neptune dynamic. Let’s look at a few key ways in which these events reflect the planetary archetypes.

First, the Saturn/Neptune dynamic brings forward the idea of what is real and what is imagined or what is fantasy. For many people, unfortunately, there is a kind of fog of denial hovering around the reality of the holocaust. In a strange way, this past weekend’s Trump event, and the entire nature of its unfolding, “Is this real antisemitism or isn’t it?”, during the the midst of the death of a famous peace activist and Jewish holocaust survivor, serves as an echo chamber for the tendency to delude ourselves into believing that hatred, evil, and bigotry are not REAL aspects of the collective unconscious.

Secondly, and this point is challenging for our minds to comprehend, the search for conscious intent on the part of Donald Trump or his campaign in many ways misses the mark and plays into the hands of people who want nothing more than to continue denying the existence of our collective shadows (consciously and/or unconsciously). Is it likely that the Star of David image was intentional, of course it is! However, we have to remember that ignorance also generates its own intelligent signs and symbols. Freudian slips aren’t just cute little conscious mistakes we make,in other words, they are indications of truths that may transcend, evade, and infringe upon conscious intentions in order to SPEAK their own truths and reveal different dimensions of consciousness simultaneously. As long as we are ONLY holding someone accountable on the level of conscious intention and personal responsibility, we miss the more complex and less literal level at which an event is taking place. As a result, it also becomes much easier for someone like Donald Trump to evade or dodge the charges we level at him. He can simply say, “it wasn’t conscious or intentional.”

The point here is that even if most of us agree that it probably WAS intentional, there is no less relevance to the emergence of this sign as an unconscious or unintentional event within the overall context of its appearance. We can only understand this level of truth, however, if we study the total context of events and treat the entire sequence as a meaningful sign or voice emerging from the collective unconscious. Again…a Nobel prizing winning Jewish peace advocate and holocaust survivor dies, and simultaneously an antisemitic star of David image becomes the center of a media controversy surrounding whether or not this act of antisemitism was CONSCIOUS or UNCONSCIOUS (reflected by the words intentional or unintentional). The truly profound answer is that it can be both, or one or the other, and yet again the total sequence of events speaks no less powerfully as a sign regardless of the level at which it manifests. And as long as the ONLY line of investigation we pursue has to do with conscious/personal intention, we miss out on the profound relevance of what is also unconscious and what is collective.

This leads to an important point about black magic, demons or lower vibrational beings or spirits in general. In my decade’s worth of experiences with ayahuasca shamanism and altered states of consciousness, I had many opportunities to understand some of the ways in which darker or malefic spirits work within the body and mind. One thing I learned was that dark energies wreak havoc in our lives by using the paradigm of blame both as a kind of trap for the conscious mind and simultaneously as a life support system for their own agendas.

Let’s say that you’re struggling with anger. Blame would have you say to yourself, “own your problem, this is on you and nobody else to transform.” Alternatively, blame might say, “this is ancestral, this is your parents, and you need to heroically transform this problem for all the other people who created this problem long ago.” However, ayahuasca taught me that blame of any kind isn’t a great way to deal with a problem itself. For example, ayahuasca would have me listen and study the total context of “my” anger as it was appearing within a ceremony. Soon, “my” anger was no longer solely my own but something human, something cosmic, something ecological and biological, something archetypal, something historical, etc. The more diverse the anger became, the less oppositional it was within my body and mind, and hence it was no longer “my” problem, and in fact it wasn’t even a problem that needed me to do anything heroic at all. Quite literally, this is how numerous healings happened for me over many ceremonies. This is how I would go from being an angry person to not being so angry. The more diverse any afflicting phenomenon became as a psychic reality, the more the actual dark spirit I had first perceived as something afflicting ME was dissolved into its own complexity within psyche and cosmos. It was no longer merely a dark/afflicting entity but also a featured of an entire topography of the unconscious. As a result, it quite literally did not bother me any longer.

So, in terms of the recent Trump tweet, If we don’t study the total context of the phenomenon in which the Star of David image emerged, if we don’t learn to see the image as BOTH conscious and unconscious, if we don’t look carefully at the concurrent death of Wiesel, if we don’t carefully study the entire flow of the events as complex symbols that belong to the collective unconscious, then we stand no chance of exorcising the demon. Again, what happens as a result is that our refusal to work on any level but the level of conscious intent means that Trump can easily deflect the blame and say it was UNintentional, that he is being “demonized,” and thus the polarization continues to ironically breed a demon. But to be clear…the demon continues to be powerful specifically because it is more complicated than we’re willing to see. In fact, its this exact ignorance that the Trump campaign capitalizes upon, consciously or unconsciously (or again, both!).
These are all Saturn/Neptune dynamics…
​
Prayer: Teach us to see the quiet stars and mountains, the silent rivers and shaded valleys, running around and through each “conscious” choice or event.