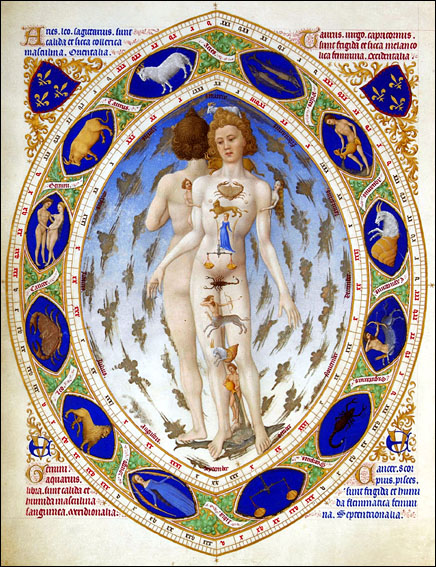 The Moon will shortly enter Cancer and move toward a trine of Neptune and square to Mars. Today I’m reflecting on the mind/body connection in relationship to the Saturn/Neptune square.

Throughout the history of astrology a perennial debate has taken place among astrologers as to how much of what is depicted in the symbols of a chart might be changed through various spiritual interventions. The Saturn/Neptune brings to mind the idea that certain limits (Saturn) might be overcome through participatory or symbolic magic (Neptune). For example, a few days ago I decided after a year of internal debate to see a medical intuitive that has come highly recommended to me by a good friend. My resistance comes from a variety of places, thoughts, etc, but in a more general sense it’s been part of my process as a practitioner as well. When I see someone to look at their birth chart there is often an expectation that I somehow “fix” or “mend” or “recommend” to someone the appropriate steps in order to avoid or change particular outcomes..most usually the unpleasant sounding ones shown by the birth chart or by an upcoming transit, etc.

Most of the time in the past few years I’ve always tried to offer people psychological, spiritual “solutions” for the handling of difficult things shown in the chart, but more recently I’ve started to let myself off the hook. I may be able to read a chart, but that doesn’t mean I’ll know how to counsel someone around the difficulties a chart shows during a reading. It’s felt nice to allow a little more room for fate or difficulty…to simply be what it is without the need to fix or avoid it. I’ve tried to encourage my clients to simply embrace the difficult things along with the good, and again it’s felt refreshingly less stressful to take this approach rather than trying to be not only the reader but the “solution finder.”

And yet, in the history of astrology the astrologer was often the solution finder as well as the diviner. The astrologer created or recommended the herbal remedy, the talisman, the magic ritual, the prayer, the gem stone, etc. Knowing this has led me to question to what extent modern astrology is lacking the “remedying” side of the craft.

I have no answers, and the questions and study will continue. At some point I hope to study medical astrology a little more and see what turns up. In the meantime, today’s meeting with a medical intuitive is my first miniature leap of faith into meeting with someone who tries to specifically address the psycho-spiritual dynamics of a physical symptom. For some people this might sound pretty lame…wow, you’ve never done that before? Well..not exactly…ten years of ayhauasca were pretty directly related to these subjects…but I’ve never met with someone to address these things without the use of a powerful entheogen. I guess that’s the point, and on some distant horizon I suppose I see myself wanting to include a little more of this level of insight into my own work.

One of the reasons it’s been easy for me to leave this level of inquiry aside is because I don’t know as much about the body. I’m more of an intellectual. Maybe one side of Saturn/Neptune has something to do with bringing worlds together that have otherwise been divided?

What worlds are you bringing together? I think that’s a good question for today.

One of my great suspicions about bringing these two worlds together has been the idea that it leaves too much unstructured, unprincipled, and essentially “upon the shoulders” of a personality rather than a time-tested system of knowledge and wisdom. I don’t like “healers” as much as I like something more objective that doesn’t rest upon the personal ego or “skills” of an individual. Even in my shamanic studies I eventually drifted toward the group practice of the Santo Daime specifically because the personas of shamans always seemed to interfere with a more clarified version of the work.

Today is kind of a big little step for me.  To allow an intuitive to address something tangible, specific, and “physical.”
Oh, Saturn/Neptune!
​
Prayer: Teach us the right use of magic and make the most common things magical again…filling our world with divine interventions of all shapes and sizes.