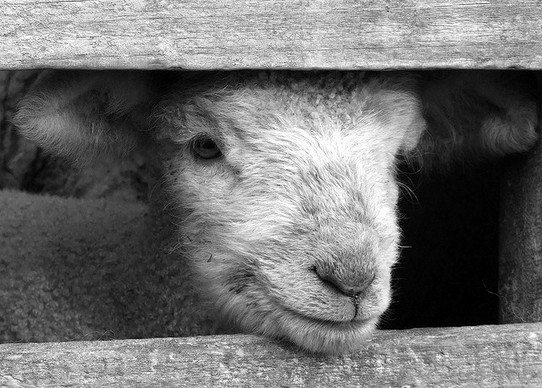 The first quarter Moon is in Pisces this morning, which means both the Sun and the Moon are in the celestial houses of Jupiter.

This morning as I was holding our newborn baby while she slept, I reflected on the great amount of mutability symbolized by the planets in the sky right now. I thought about each of the mutable signs, and I thought about the concept of cadency and all the declining or cadent houses. I thought about the fact that two of the four cadent houses (3 and 9) were associated with the mind, traveling, religion, philosophy, scribes or writers, theologians, priests or priestesses, the god and goddess, and that the other two cadent houses (6 and 12) were associated with sickness, servitude, disease, hospitals, laboring (both physical and pregnant laboring), and dark nights of the soul.

Then I thought about my experiences over the past few weeks, and even the past nine months of my wife’s pregnancy. This season of my life has been gestational in so many ways. I’ve watched my wife’s body grow and change beautifully but often painfully. She was very sick for three weeks straight in the early stages of pregnancy, and I often felt helpless to do anything. She couldn’t take medicine, and in a sense was “between worlds” and vulnerable and afraid…all themes resonant with the 6th and 12th houses. Yet, at other times, the insights and wisdom gained by these experiences were outstanding. Watching something gestate, and watching ourselves gestate, it was like an extended I Ching reading or an immersion into Taoist philosophy. In this sense the philosophical, spiritual, and existential insights were constantly blessing us, holding us, and supporting us (houses 3 and 9). We lost faith and found it again so many times.

Then, during the midst of the process we moved into our first home. This was also a long, slow, vulnerable, scary, but wisening process. We learned more about the way the world works, about finances and the banking industry, about predatory lending and about people who really want to help. And we spent nearly four months of the pregnancy moving our lives onto a new foundation, putting roots down in a new place.

The cadent places were associated with travel, and they were also said to be “not good for business” because of their changeable and “on the move” or “trasitional/transitory” nature. Obviously it’s hard to live in a mutable place all the time, but the reason these houses are also associated with wisdom, philosophy, and spirituality is because it’s during transitions that we learn about the nature of life…life is always changing, and so it’s during times of change that we learn and grow and reflect upon what is unchanging (a metaphor for the divine).

While we were at the hospital for a number of days, both in labor and after the baby was born, I definitely experienced the uncertainty, fear, feeling of entrapment, and anxiety that is traditionally associated with the 6th and 12th houses. I couldn’t go anywhere. I could barely sleep. Nothing was certain. My wife was in pain and there wasn’t much I could do about it. The health of the baby was being constantly monitored, as was my wife’s, and time seemed to vanish all together..much like an intense ayahuasca ceremony where minutes feel like hours and all you can do is breathe, trust, surrender, breathe, trust, surrender.

At one point I was so worried and scared that I decided to randomly flip open a page of scripture. Before I opened the bible randomly I prayed, “Please send me something to protect me and help me get back to center.” The bible verse I landed on was Luke 8:25, “Where is your faith?” he asked his disciples. In fear and amazement they asked one another, “Who is this? He commands even the winds and the water, and they obey him.” And so there was the 9th house…a sacred piece of scripture, a small moment of simple divination along with centering reminder, and I heard a little internal voice, something I like to think of as my guide saying, “The 3rd and the 9th are also here in the 12th.”

Then when it was finally clear that my wife was going to start pushing soon, it suddenly occurred to me (without having to look at anything), that the sign of Virgo would be rising shortly and that Virginia would be born as Jupiter was crossing the ascendant in the sign of her namesake. I realized that by order of signs Jupiter in Virgo would signify her father, since Sagittarius would be in the fourth place and hence the planet of her “father” would be on the ascendant at her birth. Out of nowhere my wife asked me, “Will you catch her when she comes out?” I was once again terrified. “I don’t know,” I said. I was almost crying because I felt so afraid of the idea of it. “What does your heart tell you?” asked the nurse. I was nearly crying, and I thought again of the bible verse, “Where is your faith?”

Finally I said, “Yeah, I do want to catch her.”

“You won’t drop her,” said the nurse. “Don’t worry. Now put these gloves on.”

And so just as Jupiter crossed the ascendant, she was in fact born, and in fact I caught her as she came into the world. So the planet signifying her father, “Jupiter,” was on the ascendant as she was born. And then I heard that same little guiding voice inside me saying, “Keep this faith. Show this faith. Live this faith. Walk this faith. Protect this faith. Know this faith.” It went on for a long time, and each new phrase was a phrase that I heard while I looked into my daughter’s eyes and as she looked back into her mom and my eyes.

So this morning as I held her while her mother got some needed sleep (now she’s with her grandmother), I meditated deeply on the subject of cadency and the mutable signs in astrology. We often say things like “nothing is permanent,” or we say “meditate on impermanence,” but as I see it now we might also say that transitional places, places of uncertainty, of rapid changes, of foreign places and gestation and fear and labor…these are also the exact places where faith finds its precise form in the invisible contours of the heart. And what is faith if not the unnameable, constant, unchanging, and unwavering sense of peace, trust, and calm available to us within the chaos that comes with life?

Today my heart feels bigger than it ever has before, and nothing seems worth a shake without tenderness, understanding, trust, and love. As an astrologer I’ve talked with thousands of people about their birth “charts,” but I had very little idea of how each birth is first an expression of love and faith. Regardless of what our charts say “about us” or what will happen “to us,” the moment of birth itself offers an image of the sanctification and holiness of our lives that in some ways needs nothing further. For this reason I also won’t look at my daughter’s birth chart for quite some time. Why when I know that her being here is the first and most simple description of her life that her, or me, or anyone else needs? From this place, it’s my prayer that the way I practice astrology for others will also become more firmly anchored in this “first truth.”

To close, we might remember that astrology begins, traditionally, as something “first appears.” When something invisible “takes form.” Whether that’s a star or planet first appearing across the eastern horizon, the ascendant, or whether it’s a baby coming out of the womb…the moment is eternally sacred because two worlds are coming together as one. And regardless of the “result” or “shape” of that coming together, today it’s my feeling that if we meditate upon this simple fact of how anything whatsoever takes shape, then our faith in all the gestations of life, the good and the bad alike, might be renewed.
​
Prayer: Bring us back to the substance of our faith