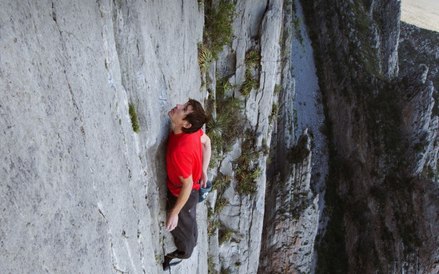 Last night I had the chance to see a film called “Free Solo.” It’s a documentary film about a mountain climber named Alex Honnold, who is famous for climbing some of the most difficult mountain walls in the world without a rope.

Throughout the film, the filmmakers explored the kind of singular focus and almost otherworldly calmness it takes for someone like Alex to climb rock walls like the famous El Capitan in Yosemite National Park without a rope.

Throughout the film, Alex appears much like a monk, living in a van by himself, and doing what most people in the world would absolutely never attempt. However, as the film developed (don’t worry, no spoilers), his story is complicated by falling in love.

As I walked away from the film, afterward, I was thinking about how rare and uncommon his story is and yet how it is somehow just the type of accomplishment that many of us unconsciously measure ourselves against all the time.

Spiritual life is often sold to us as a story of great vertical heights and singular focus, the gold medal on high. If you want to reach God, you have to essentially become the singularly focused gold-medalist, and the stakes are high, ignorance or enlightenment, death and illusion or ultimate reality, truth, and nirvana or birth after birth lived in illusion.

Most of us look at these ideas in the same way we look at an insurmountable mountain like El Capitan. Few of us attempt to climb that mountain, what to speak of doing it without a rope.

It’s understandable. Nobody wants the goal of spiritual life to be an impossible ambition. It just doesn’t feel right on so many levels.
But what if that’s not the paradigm at all?

What does “enlightenment” look like when we take it off the mountain top and bring it back down to earth?

In the Bhagavad Gita, Krishna explains to Arjuna that the traditional form of yoga that is done sitting in a cave, meditating one’s way to the top of the mountain is possible but very difficult and arduous. We can also easily fall down along that path because the stakes are so high. However, Krishna goes on to say that the best path of yoga is that of love and devotion.

The thing about love and devotion is that while it is a practice, there is no goal other than making the beloved feel happy. While it is a goal, it is not a selfish goal but a goal rooted in the desire to serve our divine source.

When we are absorbed in this kind of practice, we couldn’t care less if we are born into another body, if we stay or leave the material matrix, of what happens or where we go next, the only thing we care about, truly, is love.

From this kind of singular focus, the Universe is also seen as a mountain, or a great tree, whose roots are upward and whose branches descend downward. Living life in the valley, we can reach up and very easily touch the tallest summit because the choice and practice of love, is both the lowest and the highest, at once.

I’m still, of course, completely impressed by people like Alex Honnold. Watching him climb El Capitan without a rope was also a study in presence and calmness. I highly recommend the movie!

I also couldn’t help but notice that while the Moon was in Capricorn, conjoining Saturn, that I was watching the equivalent of a human Mountain Goat, scaling an enormous mountain with ice water in his veins!

I hope you all have a beautiful day today!

I am in need of 10 more backers today to help me keep pace. We are almost at the 200 backer mark!

Remember, you can pick a variety of rewards when you donate!