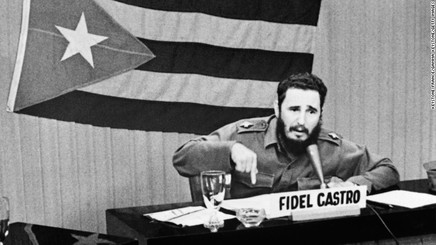 It’s Dark Moon time again, and the Moon is in Scorpio. Today let’s preview the astrology of the month ahead!

Meanwhile, we are at 58 backers and $4,005 raised toward my goal of $7,500 to support these daily horoscopes in 2017. We’ve gained some steam now that the holiday is over, but we still have a long way to go, and I need your help. Pitch in and let me do a year ahead reading for you or a friend, or take advantage of over half off the Nightlight astrology courses in 2017! Find the link in the comments section below.

Here’s what to watch for in the month ahead:

* As the new moon cycle begins next week we’re looking at a month that will be dominated by the Jupiter/Uranus opposition, which will be peaking from the Full Moon onward. Watch as the wave of revolution, expansion, and the unexpected take hold both personally and in the collective.
* Note that under the dark Moon (today) that precedes all of this, an old revolutionary/tyrant, Fidel Castro, has died and there is celebration in the streets. What will come in the wake of this event considering the Jupiter/Uranus opposition to come?
* Note that the Green party has raised enough money to begin a recount process for the state of Wisconsin, with the intention to investigate potential hacking in the election.
* As the Full Moon intensifies the Sun will conjoin Saturn and Mercury will slow down to station and turn retrograde by the last quarter Moon. In fact, Mercury will turn retrograde on the day the electoral college meets.
* Not only will Mercury turn retrograde on the day the electoral college meets but it will do so in conjunction with Pluto and within less than 5 degrees of a t-square to the Jupiter/Uranus opposition.

There is much more to say, but for now I leave you with these images, images that are truly omens for us here at the closing of 2016, and the suggestion that everyone sit with this image just for a little while in the next few days.

A tyrant and failed revolutionary is dead. Celebration. But what will happen next? Revolution, enthusiasm, expansion, challenges, breakthroughs ahead. A group of people defending their native homeland while others try to take what isn’t rightfully theirs to take, what was never rightfully theirs in the first place. Revolution, enthusiasm, expansion, challenges, and breakthroughs ahead. What will happen next?
​
Prayer: Teach us to read the symbols of our everyday lives, and of the images in the world soul, so that we might hear the sacred voice speaking to us, guiding us, all the time.