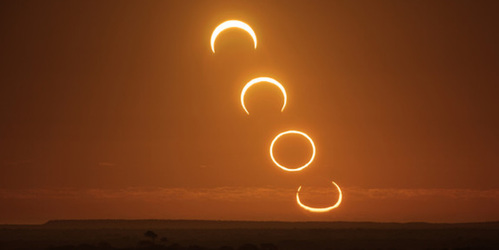 The dark Moon is in Leo, moving toward a solar eclipse on Thursday morning.

Here is what to watch for with this upcoming eclipse:

* Look back to September 2006 and 2007 for the last solar eclipses in Virgo. Then look back to September of 1997. These eclipses may share something in common in terms of the kinds of doors that were opening in your life around those times. For example, in 1997 I was starting high school in a new city and because I was the new kid and didn’t know anyone I turned inward and got deeply involved in creative writing that year. In 2006 I began graduate school for creative writing, and in 2007 I began writing for RealitySandwich and began the final draft of my first book. All of these solar eclipse periods landed in my 5th house (the joy of Venus, and a house related to creativity and the arts), and were in a Mercury ruled sign (Mercury also related to writing).

Every eclipse can be viewed from the perspective of the Saros cycle…which happens every 18 or so years as the nodes of the Moon return to the same place for eclipses. You can also look at the midway point of the cycle, which happens around nine years into the cycle (hence 1997 and 2006 as two important years both related to creative writing in my life).

Look at the Virgo ruled area of your chart and see what you find during those previous eclipses!

* Remember that solar eclipses often introduce new people, new jobs, new interests or new focus, new wisdom, new opportunities for growth, new basic/concrete facts that we have to face or deal with, or new eras or seasons in life. So watch for the weeks ahead to act like doors opening. The fact that this is happening as we transition through the Fall Equinox is also important. This is a transitional and closing or resolving moment at once…a long period of waiting, working, changing, and demonstrating patience with a process may be coming to a close…

* Remember that this eclipse is also hosted by a very powerful and very retrograde Mercury…this doorway might involve something from the past, or it might involve some unexpected change of plans, or the reorganization or revising of something based on new information coming to light.
​
Prayer: When things happen that we don’t expect or that are somehow beyond our control, help us to pause and see the fingerprints of something sacred…help us to do this before we react or strategize our response.