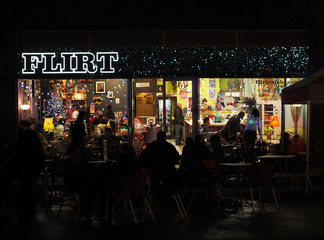 The Moon is in Aries this morning, about to sextile Mercury retrograde and then trine Jupiter in Leo. It’s a good day for making plans or mapping out the not so distant future.

Aries loves to break ground and move forward, and Aquarius loves the big picture. However, with Mercury retrograde it’s important to listen to the voice of inhibition. Are we rushing forward too quickly? Are we missing something? Are there first steps we can take without over committing to something too quickly? Retrograde periods of Mercury often bring exciting ideas from out of nowhere, but those ideas usually need time to gestate. Something I’ve learned for myself…an inspiring idea that comes during Mercury’s retrograde is like the first half of a sentence or message…the rest will come in time but it needs my participation and pondering first.

This is actually an important lesson for all retrograde periods. Letting ideas work us, and working our ideas, over time….staying with them, not putting them down entirely, but also not trying to champion them too quickly. The fostering and nurturing of ideas and images in our psyches until they’ve become something more complete unto themselves is not unlike the work of an artist…

For example, when I first started writing daily horoscopes, over a year ago now, I knew they might turn into some component of my paid work load eventually, but I had no idea how. During a Mercury RX I got the idea for the horoscopes and in successive retrogrades more important ideas would come. Little by little, in other words, our ideas shape and change, grow and mature, and yield their different fruits along the way.

As a writer, each morning I find it’s the same process in microcosm. I will start with an idea or two that’s on my mind, and then I will sit with the idea and try to let it breathe, speak, or come into its own. After a while of doing this, tinkering and tailoring, the ideas will take off and speak their own thoughts..diversifying, changing direction, and running past me up the trail.

Today is one of those days for groundbreaking ideas and exciting thoughts, but beware the rush to completion. Beware the move past the idea itself or the too quick exhaustion of the idea’s bursting quality. Try staying with the burst…let it move around…set it down a bit and then come back to it. Then watch it burst again stronger in a slightly different direction.

The excitement we feel about the idea isn’t “about” the idea…its the idea itself. Once we recognize an idea’s autonomy, we can explore what’s just entered our life, more like a creature than a concept…and that’s when the real magic begins. New ideas not granted a life of their own become part of our most predictable habits and routines. Ideas are here to take us, but we’re also here to take them…none of this happens without a little old fashioned romancing…the flirting and fawning that can only happen when we create some space between ourselves and whatever’s cooking.

Prayer: help us to flirt a little more with our most exciting ideas…

Image by courtesy of Lets Go Out, at creative commons image licensing