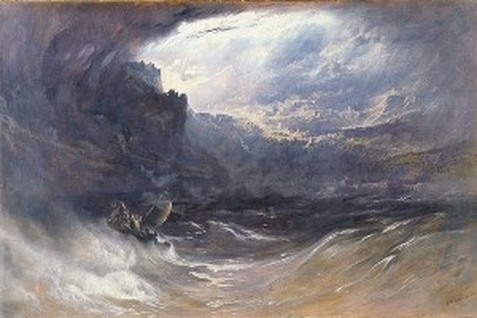 The Moon is in Virgo this morning, void of course. Meanwhile the Sun is moving toward a conjunction with Neptune.

There is a hexagram from the I Ching that reminds me of the Sun/Neptune conjunction. Hexagram number three: difficulty at the beginning. As the third hexagram of the I Ching the traditional commentary points to the early stages of creation, where myriad beings come into form and there is a kind of orgy of creative chaos. The pictorial of the hexagram shows a plant struggling as it rises above the earth, and Confucius tells us to put things in order and stay vigilant before we relax.
​
Sometimes I’ve received this hexagram at an important moment where I feel like quitting or taking a big break or vacation amidst a lot of chaos or feeling overwhelmed by something. The reason this hexagram comes to mind for the Sun/Neptune conjunction is that the conjunction brings to mind the primal flood waters and the creative proliferation of the myriad beings the I Ching mentions. The Sun and Neptune bring to mind the orgy of creative chaos and imaginative power. These are times where it can be very easy to mistake letting go for giving up, or taking a break from the overwhelm of circumstances and finding ourselves deeper in the quagmire as a result.

The I Ching’s advice is to remain vigilant, to delegate responsibilities, and to establish systems of order that can help to hold and generate meaningful order amidst the chaos.

The one thing I would add to this is that the idea of “order” isn’t a shallow or simple idea in the I Ching. If the shape of the container is simply about protecting against or holding out the primal waters and power of creation, then we’ve built our homes on sand. If on the other hand the intelligence of the structure we use to hold and organize the primal creative chaos flows directly out of or in harmony with the Tao of heaven and earth, then our organizational structures are built on a solid foundation, and they prosper moving forward because they are sturdy enough to withstand the destructive force of creation while flexible enough to accommodate its intelligence.

In a sense, the ancient Chinese conception of a good society begins in this hexagram. There is the sense of a social permaculture at work in the way that order should ideally come from chaos at the beginning. Similarly in our own lives, when we are starting off in a new direction with something, we should examine our motives. Is this an attempt to block out or deny the primal creative power, in all of its overwhelming glory? Or is it an intelligent response to that power, a dialogue that creates order in direct relationship with the intelligence of what is emerging, so that the primal power might continue to circulate without flooding?

One of the lines in the same hexagram shows a hunter chasing game deeper and deeper into the forest without a guide. The line advises to give up before getting lost. This line also strikes me as resonant with the Sun/Neptune conjunction, which brings to mind the idea of spiritual guidance, angelic intervention, divinatory judgment, or the need for an experienced guide (Sun) through the oceanic labyrinths of psyche (Neptune). So by the Sun/Neptune conjunction not only can we bring forth intelligent order from amidst the overwhelm of creative chaos, but we can also listen for the voice of guidance…the one that leads us safely into and out of the dense forests of consciousness.

In my work with ayahuasca shamanism, I would compare both the Sun/Neptune conjunction and the third hexagram of the I Ching to the total overwhelm a person experiences when flooded by the primal powers of the psyche. It’s important to keep breathing, to stay upright and centered, and it’s also important not to lay down or check out (if possible!). From this vigilant presence (as the I Ching advises) order and guidance is found and we gradually find a path through some of the most intense chaos ever experienced. For me it mostly took the form of sticking with the Icaros, which are the spirit songs received by the shamans from the plants themselves. The Icaros are OF the forest and yet they guide and order and structure the experience of consciousness as we move through the same vast spiritual realms of the jungle….healing, teaching, and restoring order to the chaos of our own personal ecosystems.

Remember too that Neptune the literal physical planet is invisible to the naked eye but orbiting out there in deep space nonetheless. But as a symbol or archetypal construct, the tidal force of Neptune has always been with us and is, in a very “real” sense, beyond itself.