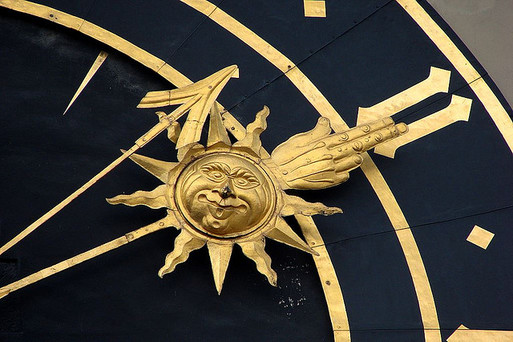 The Sun has just entered Gemini, and meanwhile the Moon is in Cancer, conjoined with Venus and both opposing Pluto. What to watch for, and then a brief note on Gemini for today’s grand entrance!

* The Venus/Pluto theme, especially given the Cancer/Cap axis, has a lot to do with nature versus nurture, affection and love versus withholding and hierarchies within groups and families….selfish interest versus the group or tribe’s interest…competition within families versus emotional cohesion. Pluto in Capricorn gives us deeply fixated reasons to think of ourselves as separate, superior, higher on the totem pole, or “above” the rest of the pack. At worst it’s an outworn alpha male kind of story being challenged by the matriarchal or emotional herd outlook.

A great example of this dynamic’s timing can be seen in the new film “Mad Max,” which pits a group of escaping women-warriors against a possessive, dictatorial tyrant king in the post apocalyptic outback. The story is essentially about the struggle between masculine and feminine values in a society starved for water and green plant life.

How are the dynamics of our closest relationships or family histories embodying any of these struggles? For example, the parents who work too much or the self obsession of jobs and personal narratives that take us away from group bonding. The class warfare or oneupmanship of income groups and higher degrees or material possessions. Using money to show affection rather than touch or quality time. Distrusting each other’s differences or insisting that a kid follow in the same footsteps as his or her parents. Over protectiveness. Clanish exclusivism. Cultural or ethnic prejudice. Favoritism. Subtle hierarchies. Double standards. Family secrets. Maintaining the appearance of “the American dream family” at all costs, despite what’s going on below the surface. Doing whatever is right for oneself despite the consequences for the larger group.

All the complications of family dynamics, marriage, intimacy, trust, clan, and tradition are very much in the air right now. The simplest truth is that the foundation has been set for a new vision of family and tribe, one that will carry us into the future if we can allow for the ways of the past to slowly fade and die, resisting the urge to fight fights that we know are futile.

* With three planets in Gemini opposing Saturn in Sagittarius and all square to Neptune in Pisces, it’s a unique moment of philosophical, intellectual, and spiritual transformation, debate, dialogue, and synthesis. Many things that were formerly set apart are now coming together, while some things that were put together might be coming apart.

It’s a paradigm changing moment, potentially. The naturally dispersive and changeable nature of the mind is being challenged to commit to something new, a vision of something larger that may require more consistency, discipline, and focus.

At the same time, whatever philosophical commitments we’re coming to right now have been arrived at because we’ve honored our own resistance for long enough that the acceptance or surrendering is done from an authentic place of sacrifice. We don’t think about this as often as we should when we use the word, “surrender.” What is there to surrender if we haven’t first strengthened the position of the one surrendering? How can we authentically give if we’ve not built anything up from which to give? Right now we should feel better about surrendering something of ourselves than at some point in the past…because we know that the choice is ours this time around. We’re not doing it from a place of “should” or “ought,” but from a place of knowing…”I am the one yielding this time. I am the one changing. I am the one submitting. I am the one who is ready to learn.”

This leads us naturally into a conversation about Gemini.

Too often these words “love” and “heart,” whitewash our minds and oversimplify our experiences. From Gemini’s point of view it’s the sharpness and clarity of perception, of thinking, of attentiveness, of changeability and the speed of recognition, that keeps us present and standing in the pre-cognitive stream of life: the bird calls and sounds and fast twitch slow twitch alternations, the information superhighway of life itself, constantly emerging from the depths of the unconscious. Life is a never ending/never beginning movement of too many things to name or count, and the reward of our interactions are the experiences themselves. Not merely love, or peace, or serenity. Those things too, but not only.

Gemini’s insistence on the nervous flow of information is the insistence upon a life lived in communication with what taoists call, “the then thousand things” or “the myriad beings.” The open mind is the mind in constant relationship with the names and faces and showings of the world around it. Here belief is just one more bird call. Here truth is just a noise in the bushes. Here plans and goals and commitments are the mating calls or territory markings of large animals in the forest.

If we haven’t established this place of mind then we have no chance of committing to something like mindfulness. If our minds aren’t sharp and our understanding of truth not based in the nervous and mental ambivalence of eternity, then we aren’t alive or alert enough to commit or focus our minds to one path or another, one teacher or another, one guiding star or another.

The double sided nature of Gemini isn’t about duality. That’s an oversimplification. Rather it’s about mental dexterity, which is also an image of our angel nature. The angelic quicksilver of the mind. Each time we resist a dogma in favor of uncertainty. Each time we resist a doctrine in favor of “don’t know, and not sure I care,” we strengthen our knowledge of the soul, which is fundamental, eternal, and as Heraclitus said, “is undiscovered though explored forever to a depth beyond report.”

It’s ironically only from this place (at least from Gemini’s perspective) that we can give our faith to anything. Ambivalence is the a-temporal origin of faith. It is not the same as doubt. Uncertainty and to some degree indifference, is the bedrock of faith according to Gemini. Because faith is not about certainty. It’s about trust without expectation. The without expectation part comes because we’ve been able to establish the deeper “open mindedness” of Gemini. As though, even if this doesn’t work out it’s okay, I’m eternal so I’ll just go try something different. I won’t ever lose my curiosity because curiosity and eternity are first cousins.

More. Gemini’s doubt, skepticism, and fierce rationalism, to some extent are defenses against the shadow side of faith, which is certainty and truth (truth with a capital and ultimate T).

Take all of this and apply it to our current t-square and that’s why we’re looking at being able to give ourselves to something (a belief, philosophy, subject, approach or vision) because we’ve done the work of establishing “open mindedness” at our roots.

On the other hand, some people might be needing to let go of certainties and ultimate truths for the sake of developing this open mindedness at a deeper level. So it’s a bit of a push and pull right now.

Prayer: Help me ground my faith in the endless space of an open mind.