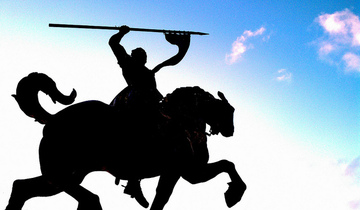 The New Moon is in Pisces today but will turn void of course by this evening. Meanwhile, today Mars enters its rulership in the sign of Aries (with Venus to follow by tomorrow and conjoin by tomorrow night).

How about this idea of integration? It’s a popular concept but also one that we rarely pause to reflect on. It’s a good idea to reflect on it today as Mars and Venus leave Pisces and enter Aries.

Ever since Carl Jung emphasized the idea it’s been a hallmark of new age thinking. The basic process that the idea refers to works like this: we start with a more or less stable set of ideas about who we are, a more or less stable ego identity. The problem is that this ego identity has problems. Its unconscious of its own shadows. Eventually life throws some kind of curve ball, or we simply come to the end of our rope with the status quo, and then we enter into a disintegration process. We lose our shit. We fall apart. We see through the illusion of our ego’s supremacy, and Humpty Dumpty falls out of the tower. Then the work becomes to gather an understanding, or to gather insights, regarding all the various parts, the various shadows, etc, and reintegrate them (consciously work them) back into a state of wholeness. Beyond this, however, the process may continue repeating as the state of wholeness grows more and more “whole,” on its way to the higher self or self-realization or enlightenment…

Integration becomes the ever growing, complexifying, vast, but ultimately cohesive mandala of the self.

Jung was a Leo, whose Sun was conjoined with Uranus in Leo. He was also born with a north node in Aries while ruler Mars was in Sagittarius. The hardest thing for us to do with his ideas, especially the ones that so completely dominate the new age world, is to see them as reflections of eternal archetypes rather than as metaphysical truths or programs.

As the Sun has just entered Pisces but Mars and Venus are entering Aries, it’s a great time to see “through” the integration archetype and its implied program of SELF-realization. We have to ask ourselves “who” among the gods is most interested in the idea of a cohesive, centralizing mandala called “Self?” Is it not the Sun? We have to ask ourselves, which god is most likely to see the deconstruction of the one into the many as a process that is ultimately geared back toward the deepening or broadening of the one? Is it not the Sun? Is this not the beauty of the Sun..that for something to be at the center, for there to be a life giving center or a heart, that all things would be seen as originating from it, going out from it, and returning to it?

Similarly, take the notion of the disintegration of our understanding, our knowledge of ourselves or reality ‘falling apart,’ and then march it toward an ever broadening, vaster but more cohesive sense of ultimate meaning and unity.
Are these not the conquesting ideas of Jung’s Mars in Sagittarius? Isn’t it clear to see the Centaur rearing up on his hind legs, arrows shooting out into the night, piercing through the darkness with its fiery desire for broader states of higher knowledge?

At this point someone might ask, but what can we make of the process of ego disintegration if not the eventual resurrection of the king and his royal light? Answer: many different things.

An example. Once during an ayahuasca ceremony I watched as some of my most cohesive ideas about myself, my past, my future, about reality, got completely broken apart. Afterward I was explaining my experience to a friend, talking to him about how I could feel the personality and independent kingdoms of all the different parts of my life, my body, psyche, and even cosmos. How diverse and unique all these different voices were. I could tell he thought I was being manic, and he kept saying “give it time and they’ll reintegrate and you’ll feel centered again.” He kept trying to offer me this picture of a king and his healthy kingdom, the heart and its centralizing, organizing program…centeredness, wholeness, integration. I tried to make a joke, and I said something like, “In my kingdom, everybody, including the king, knows that king world is just another theme park…including all its own rides and restaurants.”

My friend had this look on his face which I’ll never forget…it was a combined look of worry and judgment. He was worried for my sanity (he even commented that maybe I was spending too much time with the schizophrenics I worked with in New York City at the time) but he was also worried that I was being heretical or “dark” (he kept referring to the various teachings of the shamans and group leaders about wholeness, etc).

Later that evening when I got home I happened to reflect on my friend’s deep love of Carl Jung, and it was at this point that I realized how uncomfortable it is for the solar paradigm to consider anything other than its centralizing needs. When I pulled open Jung’s chart, sure enough..a Leo with the always questing, individualizing Uranus conjoined and that blazing north node in the individuating sign of Aries, with Mars ruling from the ever unifying sign of Sagittarius.

I didn’t lose respect for Jung, that’s not what I’m saying. I didn’t lose respect for the idea of wholeness or the process of integration, either. But I also was seeing through it…seeing, really seeing, the Centaur and the Lion, the bow and arrow and the red iron spear. I was seeing the discomfort the King has with the rebel. The insanity Jung went through as inevitably part of the greater wholeness he was compelled to systematize…mandalas, integration, higher self, etc. Beautiful! But also, archetypal. Mythic rather than metaphysic.

So what does all of this mean considering our astrology over the next few days?
Practical man, practical!!

First of all, Mars and Venus, together, bring the desire for a cohesive, unified vision. Right now the idea of integration is compelling, dynamic, and important. Where are we being asked to get our shit together, to pull the parts together into the whole, or to create the wise mandala out of the moving pieces? This drive will only increase within us over the next week as the Moon’s light gains power and we are ascending ever more rapidly toward the spring equinox, where the Sun is exalted in the sign of Aries (actions toward wholeness, synthesis, etc). So knowing this, we can act accordingly…we can’t sit back, sit around, and wait for someone to create this wholeness we’ve been dreaming about…as Mars and Venus conjoin and move from the fish into the warrior, it’s time to make it happen!

At the same time, if we don’t see through our unification efforts into their archetypal nature (if we lose track of the images of the warrior and the king, or the centaur and the spear), then we can easily become dogmatic right now. The important thing is to ask which characters or elements of our lives or psyches are calling for what kinds of unification? We need to be specific so we don’t get too regimental….

For example, what do you do if you’re craving solitude, reflection, cleansing, and purification…alone time and reading, and yet there’s another character whose asking for more sex, more physical exercise, and more unpurposeful play time?

The program of “integration” will generally either try to work out the perfect compromise, seeing the various characters as each “equal pieces of the whole,” or it will moralize about which program is more likely to lead us to a stronger and more consistent sense of self..in which case whatever is perceived as more scattering or contradicatory will be looked down upon morally or energetically, etc. We’ll pat the more disruptive child on the head and say, “I’m sorry but I’m trying to be integral and you’re not helping me.”

What would it look like to relativize the “integration” drive of Mars/Venus in Aries right now? Simply put, it would mean that doing whatever you’re doing, following whatever different element of your psyche is calling for your attention, at the moment, will likely lead to a greater feeling of understanding within that unique part of yourself. Not that you’ll see it as part of the whole and start to level up as the King of your castle, but that you’ll see the particulars more completely. Particularity served by the passing of an integration weather system through the various landscapes of your different kingdoms. Your sex and unstructured play time can feel just as essential (but completely different) from your monk fasting and sunrise prayers of renunciation.

We should work with these ideas because it’s all too easy when Aries energy comes sweeping through for us to suffer the warrior’s frenzy and the Sun’s domination. When we can’t see the spear as we’re spearing our “whole life into one consistent image,” then we’re likely possessed by the spear and a dictator is taking control. And where does possession and dictatorship stem from if not the authority of a King…

Integration…the sexiest political power word to ever rule over the kingdom of the new age. A big warrior boner in the sky! smile emoticon

Prayer: Help this wave of integration serve the strengthening of particulars…particularly the parts of ourselves we tend to look down upon or find most contradictory

Image by courtesy of Keani, at creative commons image licensing