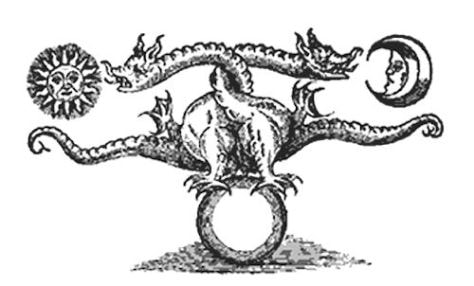 Jupiter is moving into a square with the nodes of the Moon.

* The history and use of the nodes of the Moon in traditional astrology is not well known and not well represented in modern forms of astrology. Generally speaking, most astrologers in the modern era of astrology use the nodes as part of a paradigm that suggests that the soul is “evolving” and that the north node teaches us what we’re supposed to be moving toward, whereas the south node represents the gifts and karma of the past (things we may be leaving behind as we cultivate the gifts of the north node).

* Traditionally, the nodes were not understood or used in this way. This is not to suggest that they can’t or shouldn’t be used this way, that’s up to each student of astrology to discover for themselves, but it’s important to understand how the nodes were traditionally understood and used compared to how they are used today.

* First, it’s important to understand that the nodes of the Moon, like the Moon itself, are related to the wheel or cycle of fortune/circumstance/fate and/or the soul’s perpetual reincarnation into new forms and bodies through time. The reflective and constantly changing Moon has a long history of being related to these karmic concepts within a variety of esoteric traditions and certainly within the history of astrology. So it’s not off base to suggest that the nodes of the moon are related to the karmic path or journey of the soul in the material realm.

* However, it’s very important to distinguish exactly how the nodes of the Moon were traditionally understood. In the western tradition, the north node was said to increase both the good and the bad, whereas the south node was said to decrease both the good and the bad. This is an esoteric and a rather cryptic set of ideas about the nodes that can’t be taken at face value. One thing is immediately clear, for better and worse, the north node is associated with increase and the south node with decrease.

* For me, this teaching became very clear when comparing these classical teachings about the nodes to the Indian understanding of the nodes. In the Indian tradition, the north node of the Moon, the place in the zodiac the Moon crosses as it moves ambitiously above the ecliptic, was related to the unending hunger, appetite, and desires that perpetuate reincarnation and the complexification or deepening knots of karma. Though it is related to “gain,” it is considered a deeply malefic shadow planet (Rahu) because material gains only deepen our enmeshment in the material illusion.The south node, on the other hand, called Ketu, is related to material pain, sorrow, and loss, but is considered more auspicious because it is through material loss, impermanence, and suffering that we draw closer to God. Whereas the south node brings us closer to liberation by teaching us about impermanence, the north node perpetuates the illusions of materiality, and hence future lives, by tempting us constantly with our desires.

* Is this what is meant by ancient western astrologers who said the north node increases both the good and the bad and the south node decreases both the good and the bad? It’s a riddle I continue to sit with as I observe the nodal dynamics in my clients’ charts. What’s certain, for me and in my own practice, is that the north node will never be as simple as “your soul’s lessons or where you are supposed to be moving toward.” I’m absolutely not convinced that’s how the nodes have been used or understood throughout the history of astrology. Worse, I suspect that our love of the “north node lesson,” may actually be wrapped up into a kind of spiritual materialism.

* Side note: the mythology surrounding Rahu and Ketu in the Indian tradition is incredibly fascinating. I highly recommend checking it out. I will be doing a workshop on the nodes in the new year and we will be looking at the mythology, so stay tuned!
* But maybe I’m wrong. What I know for sure is that good people, good astrologers, use the symbols of astrology differently, and I trust that the divine can utilize all of us astrologers, for the good.

* Regardless, when Jupiter comes to square the nodes of the Moon it’s a really important moment for all of us. Squares to the nodes represent important karmic crossroads. From the standpoint I’ve outlined above, we will be tempted by delusions of grandeur, growth, desire, and ambition, probably not of the variety that will help us to cultivate healthy detachment from the snare of our ego and its endless hunger.

* At the same time, we might be presented with opportunities to say no to something, to shed excess, to curb or stop our appetites in their tracks, or, with Jupiter, to experience a sense of comfort, ease, and peace within a season of loss, decline, or disintegration.

* It may sound counter intuitive, but Jupiter squaring the south node may present us with opportunities for spiritual growth that come specifically through material loss or material simplification or a healthy level of material detachment.

* On the other hand, it wouldn’t be surprising to see Jupiter squaring the north node as an opportunity for rapid development, growth, increased power, success, etc., albeit a variety of success that may eventually complicate our lives far more than we can imagine.

* Still, the basic reality of the lunar nodes would suggest that much of our karmic circumstances are determined by material desires we’ve had in past lives and desires we continue to have in this life. This could pretty quickly translate into a pretty bleak and condemning view of material reality (in some ways it is just that, and it really can’t be any other way). However, in my own practice, it’s important to recognize that the sanctification of our material situation happens when we offer our desires and the fruits of our actions in the world back to the divine, constantly, in loving devotion. In this way, I think we avoid the trap of spiritually bi-passing our material existence while still recognizing the trap of our material attachments. This is the middle path of bhakti yoga, as I understand it, outlined by Krishna in the Bhagavad Gita (it is the main line of yoga philosophy that I personally follow).

* So, the way I’m interpreting this upcoming square of the nodes from Jupiter is in terms of a karmic crossroad. And I’m remembering, what feels good going down often doesn’t feel good coming out, whereas what doesn’t always feel good going down usually feels a lot better coming out. For example, eating your vegetables as opposed to drinking soda! 🙂

* Now, I realize that many of my readers may have a totally different take on the nodes. The intention of this post isn’t to start “Nodes War 2.” I support my colleagues and friends who utilize the nodes differently. The real intention of doing the explaining I’ve done today is to simply clarify how and why I am interpreting Jupiter square the nodes in the way that I am and what you might expect given this alternate understanding of the nodes.

* I hope you enjoyed today’s post. It took me several hours to go back into my research notes and condense and translate this, along with this Jupiter forecast. This is something that I do every single day, as a part of my own devotional practice. And then for the last 40 days of every year, I ask my readers, those that are able, to donate and support my work in the year ahead! You can pick a gift reading when you do so!
​
Prayer: Teach us to be on guard against the “biggest” and “brightest” of our desires. Teach us to be content with less. Mindful. Humble. Ready to see the big, even in the small.