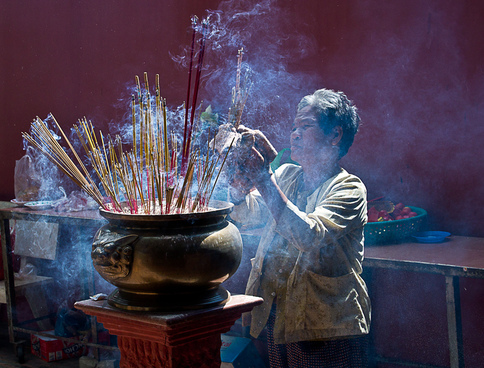 With Venus separating from Saturn and Mars applying to Neptune it’s a good day to consider the idea of sacrifice. The word has a variety of meanings, but perhaps one of the oldest involves the idea of “exchanging one thing for another, or giving up something in exchange for gaining something else.”

Too frequently I think we understand the word to mean something like “letting go of” or “surrendering.” But these actually aren’t quite the same as sacrificing. Consider for example the prevalence of blood sacrifices, of all kinds, prior to the performance of religious or divinatory rituals long ago. Consider the sacrifice of the farmer–the necessary labor that precedes the harvest. Or think of the Olympian who sacrifices the pleasures of the body, keeping a strict regiment, for the opportunity (not the guarantee) of a precious medal.

When we think of giving things up, in our day to day lives, too often we’ve been told that it’s because “you don’t need those things anyway,” or we’re told that “they’re not really what you want,” or even, “it’s not healthy to want that so you should give it up.”

Set aside the fact that sometimes we have unhealthy attachments that need to be “given up,” let’s stick with the idea that sacrifice involves a sacred exchange.

What else can we say about sacrifice?

* Sacrifice involves consistent efforts and offerings over a long period of time
* Sacrifice involves giving up something we hold sacred or dear but it also involves something we receive in return that is of a higher order of beauty or pleasure
* Sacrifice isn’t sacrifice unless it is deeply challenging to us
* Sacrifice often involves things getting worse before they get better..as in there are no guarantees we will receive what we think we are owed in exchange and for the fruit of the sacrifice to show itself there is often a period of doubt as to whether or not our sacrifice is appropriate or if anything is listening or taking note of our actions
* Sacrifice is usually performed secretly and this is the secret of it’s joy
* Sacrifice doesn’t require our joyous participation from the outset…in fact the joy of sacrifice often requires our acting the part, bravely, until the joy of the act starts to appear naturally…like a character appears naturally after acting a part long enough

It’s a good time to consider these ideas because we have a few planetary transits that are highlighting these themes. With Venus/Saturn the sacrifice might be within the realm of a relationship, it might be spiritual or religious, or it may involve our lifestyle. With Mars applying to Neptune, the sacrifice is deep and profound, and it requires a certain amount of suffering, denial, and defensiveness perhaps coming to light.

We also have to ask ourselves, what is is that we want, and is the goal rooted in the desire to have a happier, simpler, and more direct connection to the divine? On the other hand, if our desire is for something superficial, then are we cheapening the meaning of sacrifice? Are we making a “devil’s bargain?” Who are we making our deals with and why?

​Prayer: May the sacrifice be given back to the one who gives everything in the first place, and may the exchange rate of our offerings be spoken back to us in the unquantifiable language of love