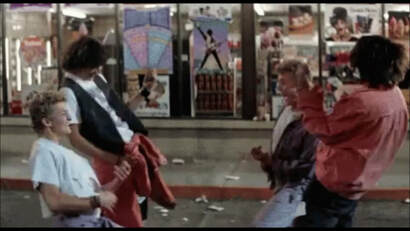 Mars is in Aries, about to conjoin Uranus, and Mercury is about to enter Pisces where it will stay for a long time, in its fall and exile, hopping around back and forth a whole bunch with Neptune…

(What the bored astrologer considers writing before creating a very spiritually centered post):

* I’m going to say and do some stupid stuff in the next few days. Everybody is.

* I don’t like anyone on social media right now. We’re all completely insufferable.

* If anyone tries to pick an online fight or have a debate, we can at least trust that nobody will have the facts right and that stupid people will be gathering very quickly like a flash mob.

* Well, someone’s going to get electrocuted.

* Crashes, injuries, sudden violence…and then a frenzy of aimless political spin? Okay, I can’t write that, it’s too dark and it doesn’t really sound like any other day of the week…

* There is a Skid Row concert happening in the sky in the next few days, but they’ll be performing on the backs of Star Ponies.

* People will experience major personal breakthroughs…MAJOR BREAKTHROUGHS…that are. not. real.

Okay, but for real, it’s an electric, fiery, unpredictable and erratic meeting between the God of War and the God of Revolution, so watch yer butts. Mercury’s change of sign also suggests that we may not be seeing everything clearly, so be discerning and patient in the days ahead. The potential for emotionally impulsive and erratic “activities” is upon us…but so too is the potential for some interesting epiphanies and originality!
​
Prayer: Well, give us a sense of humor along with the patience, discernment, and courage needed to bear with ourselves.