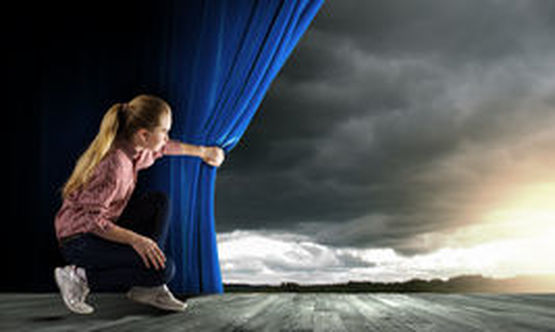 The Moon is at home in the sign of the Crab today, moving toward a trine with the Sun. Meanwhile, Mercury is cazimi.

* We’re in a unique little window today within this month’s Moon cycle. The planet Mercury is in its depression, invisible behind the beams of the Sun, and yet cazimi…meaning it’s empowered to say something, to offer a powerful omen or directive, or to carry the authority of the ruler (the Sun). This is happening as the Moon is waxing and moving into a trine with the Sun from her own sign of Cancer. Let’s take a look at an I Ching hexagram that may speak to this unique situation.

* Hexagram #55, called “Abundance,” offers a range of insights and images that can help us to understand this special astrological moment.

* First and foremost, Abundance speaks to a prolific and fast moving time of abundance and growth. The ideograph of the hexagram shows a cooking vessel below and the stems and leaves of beans above, an image of abundance and flourishing. Because the Moon is waxing and making a harmonious trine to the Sun, from her own domicile, the first idea is that we see rapid and successful growth right now.

* The next thing to note is that hexagram 55 gives us the image of thunder over fire, which we might think of as something like a powerful thunder and lightning storm. The image also includes the Sun at high noon. Then comes the decision: Abundance. Prosperous and smooth. The king reaches this point. Do not worry. Be like the Sun at noon. The decision is a teaching about the nature of times of abundance, growth, and power. Though they are abundant and prosperous, they are short-lived and should be used wisely.

* Hexagram 55 speaks to not only the fast moving nature of a waxing trine from the Moon to the Sun but also the unique and fleeting “moment” of Mercury’s cazimi status. When Mercury is at the heart of the Sun, receiving this very empowered trine from the Moon, it’s as though there is a window of development, which we should use wisely, knowing it can’t be stretched on for too long, knowing it wont’ last forever, knowing we shouldn’t try to make it more than it is or can be, but moving forward swiftly nonetheless. It’s sort of like someone saying, “there is a small window of kick-ass here for you right now, and if you use it effectively without getting high on it, you’ll have won a very important victory within a larger battle.” In fact, there is a story associated with hexagram 55 that involves a Chinese ruler building a strategic garrison city not far from the border of a Tyrant’s kingdom. Part of his strategy was to make sure that the city he built didn’t appear so big or ambitious as to rouse the suspicion of the tyrant. So part of this hexagram has to do with strategic and perhaps somewhat “under the radar” periods of progress toward an eventual victory.

* Whenever I get this hexagram I always think of one of those days where you find an abundance of energy and excitement, and you can do one of two things: a) use it wisely to get a few good t hings done, or b) get swept up in it, think too big, and miss a window to get anything done at all. I also think of times where you have a great idea but it’s better to do something with it in the quiet than talk about it openly…as though being too open or ambitious with this unique creative spark will draw the ire of an enemy.

* On a more esoteric level, there is also a story associated with hexagram 55 that has to do with the art of divination itself. Outside the garrison city (which was a strategic foothold) there was also a divination tower built. The tower was used to get a sense of what was happening in the corrupt tyrant’s court (by paying attention to celestial omens the diviners could see something of the corruption and dangerous plots that were being hidden by the tyrant). The hexagram’s individual lines speak to various levels of scandal and concealment taking place in the tyrant’s court and the misfortune it would lead to in the end. The lines also include the admonition to keep things simple, direct, clear, and truthful in response to corruption.

* It’s tempting to be manipulative when we suspect or KNOW that someone else is being manipulative or dishonest. And yet when we receive a clear sign of the secret dishonesty or bad intentions on the horizon, we are instructed not to start crafting our own deceptive or corrupt strategies, but rather to watch and wait for the appropriate time to meet the danger out in the open, under the clear light of the Sun at high noon…the place and time of victory.

* All of this again reminds us that windows of tremendous power and advancement are always ordained by the times, and for these unique moments to be accessed we have to be in the practice of carefully observing signs and omens. Mercury at the heart of the Sun in the sign of Pisces offers a unique revelation or sign. It’s a sign that says “now is the time,” or “this is what’s going on behind the visible appearances.” And again, within either of these revelations there is the inherent reminder to have respect for the Tao itself, which promises that powerful moments of success in the open move quickly and do not last very long. We have to stay alert, prepare and advance in stages, and wait for the these unique moments in order to have success…
​
Prayer: Teach us the way of advance, show us a clear sign of what we cannot see, and give us the patience to find victory in the open.