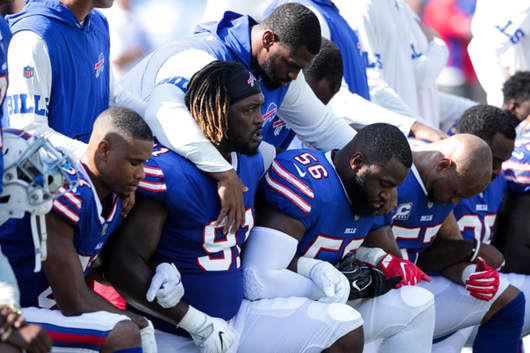 * As Mars opposite Neptune perfected this weekend we saw a wave of controversy in the professional sports world in the United States. It was just one of many Mars/Neptune type events happening around the world but an impressively literal turn of events. Mars is the athlete and warrior, and numerous teams around the NFL chose to sit, kneel, interlock arms with each other and ownership or not arrive on the field at all for the singing of the national anthem (a song sung in honor of warriors). This took place after the President attacked protesting players (primarily black athletes) for utilizing their platform as an athlete to protest racial injustice (suggesting team owners should fire anyone who protests). Athletes from all different sports sounded off over the weekend in support…

* Jupiter opposes Uranus this week. Jupiter is expansion, exaggeration, growth, optimism, and victory, whereas Uranus is radicality, resistance to authority, iconoclasm, revolution, invention, disruption, shock, and enthusiasm for the new. Watch as the tension of these two planets combines in the headlines over the week, as well as your personal life and the lives of those around you.

* In just a few weeks, Jupiter will enter Scorpio to stay for a year, and the expansiveness of Jupiter will be toned by the depth, drive, aggression, intensity, and emotion of the Mars-ruled sign of the Scorpion. If you’re a Scorpio Sun sign, it’s going to be a big year for you!

* Meanwhile, today Mercury is square to Saturn. Whereas Mercury is the mind, communication, speech, messages, messengers, technology, travel plans, organization, and all things technical, analytical, or craft-oriented, Saturn is seriousness, focus, discipline, time, death, age, maturity, structure, rigidity, and commitment. The two planets moving into a square with each other may show up in terms of a serious new plan, a revision of strategy or method, a commitment to a path of study, the development or structuring of a message, the death of a messenger, a serious message, the difficulty of coming to an agreement, the word “no,” the way we say “no,” the resistance to ideas, words of harshness, mind-control, message management, or diplomacy with or among rigid thinkers, or the development of a new method, craft, or practice.

* Finally, it’s worth mentioning that Venus is also closing in on an opposition to Neptune. We’ll keep our eye on this over the next week. Venus opposite Neptune brings the subject of women, art, pleasure, sensuality, beauty, relationships, and harmony to the forefront of the planetary dance in the next week.
​
Prayer: Give us strong minds, but make our minds flexible. Teach us to listen. Give us revolutionary hearts, but make our hearts compassionate. Teach us to trust every season of life.