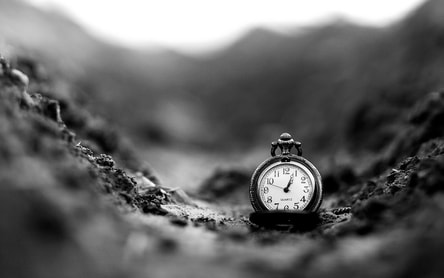 Mercury is stationing in a close conjunction with Saturn, about to turn retrograde. Last night, out of nowhere, one day after the Mars/Uranus opposition and an earthquake shook my house, an old antique clock started working again, perhaps shaken to life by the tremors of the earth. It actually woke me from sleep, and I puzzled over it for an hour or so before going back to bed. The winding key for the clock is missing, and it literally hasn’t worked for years.

During the night I had a dream that suggested to me that the symbolism of the awakened clock wasn’t merely personal but that it was also an archetypal teaching device, a kind of synchronistic skeleton key, inviting a deeper take on the meaning of Mercury and Saturn’s positions in the sky right now.

* We talk frequently about awakenings in the spiritual life. Awakening is something related to the notion of liberation from the bondage or illusion of unconsciousness. That’s how we talk about it. This morning as I pondered being woken from sleep to the sound of the chiming clock, something old and from the past but made new again by the shaking of the foundations of the earth, I found my way to this passage from the Uddhava Gita, considered to be the final teachings of Krishna.

“Neither bondage nor liberation is real. Subject to the gunas – the three boundaries of nature, the mind thinks of itself now as bound, now as free. But since these boundaries are themselves illusory, I tell you, there is neither bondage nor liberation. At night when one is asleep and the mind reflects upon the day, we call this a dream. Likewise grief and joy, living and dying and being born again, all are but a dream. O Uddhava, Know that both knowledge and ignorance are the cause of both freedom and bondage. Knowledge, the source of freedom, and ignorance, the source of bondage, have always existed as a part of creation. You are wise, Uddhava, think now! The individual soul is part of the one Reality. Bondage is based on ignorance and Liberation is based on knowledge of the one reality behind the parts. That which is free in you and that which is bound have different qualities, even though they occupy the same body. Let me explain: the individual can be likened to two birds, companions who nest in the same tree. One eats the fruit of the tree, the other refrains from eating. Yet it is the one that does not eat that is the source of strength for both. The Reality is like the bird that does not eat, it is enlightened: it knows itself and it knows its companion. The unreal is like the bird that eats, it is ignorant: it knows neither itself nor its companion. Only that bird filled by knowledge of the Self is free. Just so are the wise, They have awakened from the dream. And just as on awakening you would not cling to a dream, they do not cling to the body, But ah! the ignorant, they still live in the dream. The wise, though still of the body, are no longer confined to it…the wise become like the sky, like the sun, like the wind…free and unbound. They can sit and walk, bathe and eat, hear, touch and smell: yet in the midst of all this living the wise remain unbounded by the boundaries of material nature. The body of the wise one remains tied to the boundaries of material nature. But ah! The wise understand the truth behind the world of duality and multiplicity.”

* It seems as though an old clock, some relic from an unenlightened past, has been awakened, has come to life and is now keeping time or is now the ruler. Saturn is about to enter it’s home sign, and Saturn is the ruler of time.

* And yet, doesn’t this suggest to us that there is a season and a “time” for all things? Doesn’t the awakening of the old clock, born again in a new season, suggest the underlying unity and non-duality of time? In a strange way, being woken to the past, especially the karmic past, is a reminder that nothing is ever really dead. Progress forward is inevitably tied to the past, and insofar as we are attached to progress as a material outcome waiting for us in the future, we are also prisoners of the past, ruled by a dead clock we keep as an ornament on our forward-thinking shelves.

* In Indian philosophy, time is frequently referred to as “eternal.” The creation and destruction of the material multiverse, governed by time, is cyclical, and the souls embodied within it are likened to the awakened bird sitting in the tree alongside the sleeping bird. Time is therefore both the agent of sleep as well as the call of the companion, awakening us to eternity.

* Birds and the interpretation of omens alike belong to the hermeneutics of Hermes: Mercury.

* When the earthquake shook my house, and likely awakened the clock, I was reading an article about Bruce Lee as I prepared a lecture on the meaning of the Sun in the first house. I was literally typing this quote into my powerpoint: “If you love life, don’t waste time, for time is what life is made up of.”

* Bruce Lee was born with the Sun in Sagittarius, by the way!

* Lee is right about the importance of how we use time. But it’s less about how we use time in terms of material results or outcomes in the past, present, or future, and more about the use of time as the call to the qualities of eternity in its midst…eternity is present in all times.

* This is why, for example, Saturn in Greek myth rules the Golden age but is also associated with death, old age, decline, and ruin. As Marcus Manilus, a Hellenistic astrologer, wrote of the fourth house, “Where at the opposite pole the universe subsides, occupying the foundations, and from the depths of midnight gloom gazes up at the back of the Earth, in that region Saturn exercises the powers that are his own: cast down himself in ages past from empire in the skies and the throne of heaven, he wields as a father power over the fortunes of fathers and the plight of the old.”

* Of the fourth house, Manilius also wrote, “The next point, though situated in the lowest position, bears the world poised on its eternal base…”

* The 4th house, which Manilius relates to Saturn, was also traditionally said to be “the beginning and end of all things.”

* As the ruler of time, Saturn is both the exalted golden age as well as the inevitable usurping, rebellion, and power struggle that leads to demise. Time itself is eternal as well as conditional. It is the conditioning force, the ever cycling clock of sleep and death, as well as the chiming call of the companion to awaken from our slumber.

* This morning, I am hearing again the sounding of the old clock, now as the call of the soul, the glorious, flaming songbird of heaven, a bold peacock fanning out its plumage in the gardens of eternity.

* What can any of us do but heed the bells when they ring and to stay awake, to stay awake regardless of what these unending rivers of dream-time may bring?

Prayer: Teach us to hear the call, and to use the times we are given wisely.

** If you haven’t pitched in to support my kickstarter, please consider doing so. If you liked today’s story, if you enjoyed participating in the creation of these astrological events through my blog, then please support my work in the year ahead. I’ll be happy to make you a year-ahead reading as a thank you gift!”