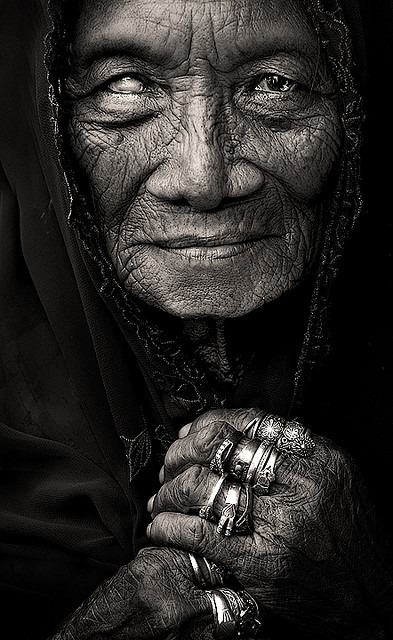 The Moon is in Pisces, moving toward a square of Saturn in Sagittarius this evening. The image of the wise woman sage comes to mind, and so it’s fitting that both Susan Weed and Demetra George are visiting our herbal and astrological programs tonight!

But in all seriousness, Saturn and the Moon are so frequently discussed in the negative that it seems like a good day to discuss the most positive archetypal symbolism involved in Moon/Saturn contacts. The first that comes to mind is the archetype of the grandmother or matriarch as medicine woman. If you grew up with a wise old grandmother, or even a devout but good spirited religious grandmother then you might be familiar with this evening’s planetary symbols.

In fact, I was born on my own grandmother’s birthday, July 16th, and I have many memories of receiving long, hand written letters from her in the mail throughout my youth. She would often quote bible verses at the beginning or end of her letters. Added to this, I have one image of my grandmother that came to me one time during an ayahuasca ceremony, a moment where I felt her presence and the astrological significance of our shared birth date very strongly. The image was of her walking in the woods on my grandparents land in rural Michigan, holding her bible in the early morning sunlight. I don’t know if I ever actually saw her do this, though I know for a fact it was part of her devotional practice for many years. Another image of her that comes to mind sometimes when I think of her is the image of her swimming in the pond behind my grandparents’ house. Something she also did in the early mornings, and something that was also, I think, part of the way she got quiet and connected to God.

I remember once when I was visiting my grandparents from Minnesota, while I was in high school. I had driven out with my best friend at the time, and we stayed with them for a week or two. She was going to make us a special dinner one night, and she told us to be home from our adventures by six in the evening. We didn’t make it back until 7pm, because we weren’t as aware of time as we should have been. She was in tears when we got back, and I had never seen her so angry. I found it odd, because the only other time I remembered being afraid of my grandmother was when she confronted me for stealing $20 from her wallet (I went through a stealing phase in Jr High). She had caught me rifling through her purse and then pretended not to see me doing it. When I got home to my parents (after another summer visit from Minnesota) they confronted me saying that Grandma had called and told them what she had seen. I admitted it and wrote her an apology letter, to which she responded with a very forgiving and encouraging letter. She cited a scripture that I can’t recall, and she told me to stay on the straight and narrow because thievery was a slippery slope (or something like that).

She was, in her own way, a sage, and as I grow older and perhaps the testosterone in my body is quieting just a little bit, it’s as though I can see the feminine wisdom all around me. And what I notice is that this wisdom is decidedly different from masculine wisdom. It’s subtler, more flexible, and patient. It’s quieter but lacks nothing for firmness. Like the silk threads of a spider web, this kind of wisdom both supports far more than it appears to but also allows for no mischief to pass through its weave without getting caught, exposed or paralyzed, and potentially reckoned with. In fact, in many ayahuasca ceremonies and even in dreams, I’ve seen the rays of the Moon stretching out over the earth like a web of a protective but ensnaring fibers. Is our world below the Moon treacherous or is it life giving? To be honest, I sensed both these qualities in my grandmother and was confused by it. Late to dinner was treacherous, but dealing with a thief was gentle. Religion somehow played an important role in my confusion. What is a web without the complication of the spider and its dual nature?

It’s raining where I am today. Inside and out. The kind of rain that comes in late Scorpio season, when the Moon is in Pisces. Gentle, deep, quiet and treacherous. With the coming square to Saturn tonight, I am very much looking forward to hearing the sounds of elder women echoing in the halls of my home, teaching about planets and plants…while my wife is about to give birth at any moment. I can see the rite of passage happening in her body. The way she moves and breathes. A deeper wisdom settling into her soul now.
​
Prayer: a song of gratitude and fear.. to the Maiden, to the Mother, and to this evening’s Moonlit Crones!