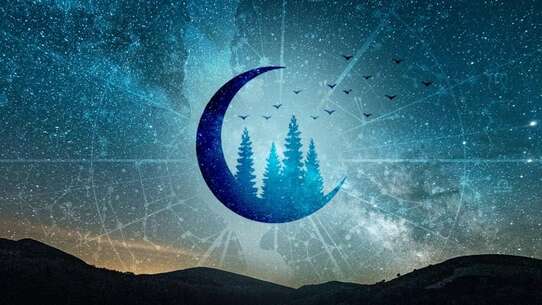 There is a lot going on today, with a New Moon conjoined with Neptune, as Mercury turns retrograde in its fall/detriment in Pisces, and just as Uranus enters Taurus. Today, I’ll focus on the New Moon and tomorrow I’ll discuss Uranus into Taurus.

* The New Moon’s conjunction to Neptune in Pisces, in a close sextile with Saturn and Pluto in Capricorn, brings to mind themes of sacrifice. Notice the desire to give up what has been gained or accumulated, or to provide help or support to someone in need, but be sure to ask yourself if you are compromising or letting go of too much in the process.

* It’s especially difficult to let go of something when we are ready to let go but others are not. One might be tempted to stay involved with something or to continue giving something of yourself because it feels good to be needed, or it is gratifying to the ego to stay with something even when your heart is no longer in it.

* Not knowing what we have to give or invest, and not knowing what is worth giving to or investing in, are both recipes for disaster right now because there is both a youthful idealism and a sacrificing or compromising spirit at play during this new Moon that will lead us astray if we aren’t taking the time to sober ourselves and ask some serious questions.

* When we recall that our soul’s true nature is that of a servant, it becomes easier to remember life’s purpose: I am here to love and serve the divine whole of which I am a part. Knowing this, we can make plans so that, little by little, we are reducing whatever keeps us from service or we are making decisions that take us only in the direction of deepening our spiritual lives, rather than doubling down on our material entanglements. Anything less than the prioritization of spiritual growth, we may now begin to see as a drain on our only real asset, which is the desire to serve and love our divine source.

* With Mercury turning retrograde in both its detriment and fall, things may not go as planned, and actually, it’s possible that they get really screwed up! But imagine that the orchestrator behind every single thing that happens to you is an eternal well-wisher, someone who knows exactly what we need in each and every moment. Do we dare to say, “It could have been worse?” Or even, “Thank you?”

* For example, on my way home from India, as Mercury was stationing, my connecting flight from New Delhi to New York was delayed by eight hours, and then, just hours after takeoff, we had a strange, unannounced landing in Dubai, where we sat on a runway for almost two hours refueling. Apparently, the conflict between India and Pakistan caused our flight path to change. We had to fly around Pakistan air space and stopped in Dubai to refuel along the way. Then, 15 more hours later and no wifi or any working entertainment technology on the airplane, what was supposed to be a 15-hour flight had turned into a 30+ hour ordeal. Added to this, on my 4 hour taxi ride from Mayapur to Calcutta, my driver at one point decided to stop somewhere, left me in the car and disappeared for an hour, my flight from Calcutta to New Delhi was delayed by several hours, and then when I returned to New York City, I had missed my connecting flight, was not reimbursed or rebooked, sat in a very long customs line, and then had to rent a car and drive 4 hours to the BWI airport, where I then had to take two shuttles to get to my original parking spot, and then drive home 45 minutes. When it was all done, it was over 60 hours of travel and about 6 hours of sleep. Meanwhile, I came down with a cold during the process, and I was in the middle seat for the entire journey!

* During the horrible journey home, I came to learn that the young man sitting next to me was traveling back to the US after a series of panic attacks had sent him home to India seeking answers to questions that he was just now “realizing” were actually spiritual in nature.

* In life, we each board the plane, and once it takes off, we don’t have a lot of say over its material direction or final destination. However, we have some spiritual freedom during the journey. We can zone out and watch movies. Get up and walk around. Get anxious, or panic and blame the stewards or the airline. Or we can use the opportunity to discuss things that really matter. To read and think about things that really matter. We can try to remain peaceful and accepting of whatever the journey brings. We can say “thank you,” we can chant and sing the innumerable names of God, and then watch as our happiness meters rise regardless of what’s happening around us.

* I was the first person to tell this young man that his having just quit smoking after several years of regular smoking could be causing his panic attacks. I was stunned to hear that nobody had really suggested this to him yet. He was stunned to think there may not be anything seriously wrong with him and that maybe he didn’t need to be on anti-anxiety meds. Maybe there were other things that could help him. I showed him how to chant and suggested he try it to help with his panic attacks.
​
Prayer: Maybe there are other things that can help us. Show us where to make the appropriate sacrifices so that we might deepen our spiritual lives.