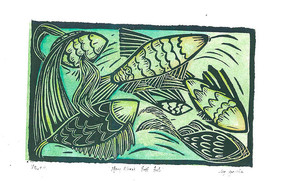 This evening the Moon will conjoin the Sun at the very last degree and last minute of the last degree of Aquarius, and then both planets will move together into the sign of Pisces. A very magical new moon moment to consider for today’s horoscope.

Each ten degrees of the zodiac, 36 in total, has a unique “face.” Traditionally the first ten degrees, or the first “face,” of Pisces was ruled by Saturn. Saturn’s place of “joy” was also traditionally located in the 12th house (the house ‘ruled’ by Pisces). Often you’ll hear astrologers saying Saturn has a special relationship with the 12th house or with Pisces because Saturn enjoys things like prisons and asylums and isolation and suffering, etc, but with a little more careful reflection and a little less “balefulness” we can see that there’s a lot more going on with this designation.

Last night in one of my classes we discussed the Saturn/Neptune connection by looking at several lines from a Mary Oliver poem my wife recently shared in a newsletter from our yoga studio. In her poem “Bone,” Oliver writes, “Beside me/ the gray sea/ was opening and shutting its wave-doors,/ unfolding over and over/ its time-ridiculing roar;/ I looked but I couldn’t see anything/ through its dark-knit glare;/ yet don’t we all know, the golden sand/ is there at the bottom,/ though our eyes have never seen it,/ nor can our hands ever catch it/lest we would sift it down/into fractions, and facts/certainties/and what the soul is, also/I believe I will never quite know.”

The eye of the poet is much like the Saturn/Neptune square intensifying in the sky right now, and much like the first Saturnine face of Pisces which our new moon is embodying this evening. The poet sees the shapes (Saturn) of the eternal (Neptune). The poet knows (Saturn) the unknowable (Neptune). Though the particularity of the soul, its form and shape, is glared by the presence of eternity, as Oliver says, “the golden sand/is there at the bottom.”

As Saturn is a planet of negation and boundaries, of the words “not this, not that,” it is often blamed as a being a limiter rather than given recognition as a helpful definer or form giver. Thus nowhere is Saturn more necessary, more ironically embedded, than in the first degrees of Pisces…like the golden sand floor we can’t see beneath the vast ocean, eternity has many faces. The formless presents itself to us in particulars: the sunrise and the lonely winds, the small flames kept in secret stoves, the silver forged words of the poem, and the dog sleeping in the patch of sunshine. Saturn acts like an invisible medium for the ecstasy and mystery of the cosmos, “in its entirety” (Neptune).

The word “entire” means “unbroken” or “in tact.” And yet, again, this unbrokenness requires the broken off. It’s important to re-emphasize this because it’s so easy to put form and face in the “lower service” of the “higher eternal.” It’s a perennial wildflower temptation to idolize Neptune and create a cult of sentimentality around the primacy or “firstness” of the formless or imaginal. Saturn can thus subtly dominate Neptune in their unavoidable father/son dynamics. The more particular, the more fixed, the more polarized we become about, “what goes beyond the opposites” or, “what goes beyond form,” or “what transcends limits,” the more Saturnine our Neptune becomes. Similarly, in our lives, when we become overly identified with words like “imagination,” or “spirit,” or “god,” or “beauty,” or “love,” the words calcify and Neptune becomes subordinate to Saturn’s shadowy strictures and control regimes.

Each day of her career Mary Oliver would rise with the Sun, the 12th house time of day, and she would find the particular names given to the formless. First here, now there, something she’s described as “devotional attention.” The word “attention,” in fact means “to wait upon” or “to stretch toward.” Oliver was a Virgo with Sun/Venus and Neptune triple conjoined in Virgo but also opposite Saturn in Pisces. Oliver’s craftsmanship could be described as a meticulous, earthy steward of the formless and its reachings, an image of Saturn taking its joy by waiting upon and being waited upon, the eternal. As the ruler of the “golden age,” (invoking again Oliver’s golden sand below the ocean), Saturn’s form giving relationships, its ordering and delineating says, “all things in their right place.” The sanctity of eternity. As Oliver similarly wrote in her famous poem, “Wild Geese,” “the world offers itself to your imagination,/calls to you like the wild geese, harsh and exciting/over and over announcing your place/in the family of things.”

By attending to the formless we don’t just find ourselves “in sentimental service” to the primacy of the transcendent, in other words, but rather we discover a subtle reciprocity, the shape and charactered soulfulness we’re given by what attends to us when we remain attentive. Here again is the first and paradoxically saturnine face of Pisces; the face of tonight’s new moon.

So, all of this is great, but practically, dear god practically!, what does this mean for me?!

Here are a few suggestions or applications for our new moon tonight:

* Where is something overwhelming you right now? Where do you feel completely overwhelmed by a feeling or presence or subject or something that just won’t move? Rather than being frustrated by it, can you attend to it? Start to see it shape and size. Start to see it as a thing in itself, rather than an emotion or problem or something that is only about yourself? Sometimes by allowing an overwhelm to become a separate shape, we can begin to engage it in a poetic dialogue, see what it wants, see if there’s a god in the problem, and even begin to see its beauty..what is this trouble offering me?

* Where are you being asked to give more of yourself in devotion? What area of your life is calling for more care and attention? Are you applying your best energy, the freshest parts of yourself to those pieces of eternity that are reaching towards you, that are longing for you, right now? Why are we keeping ourselves from something that longs for us? Waiting on what waits on us…this brings the deepening of our soul.

* Where are we seeing the grotesque shape of something we’ve been giving too much
of our attention to? If what attends upon us is what we attend upon, then are we ready to see the monster in the mirror? Is it really a monster? Do we want to keep giving our attention to this shape that’s shaping us?

* In what area of our lives is something brand new being born? What overly rigid ideas or structures do we have in place that keep us from giving form or shape to this new life? What are we most afraid of that’s keeping our attention distracted? We have to look carefully…because often enough our fears mask themselves in lofty ideas about truth and love and beauty and priorities and morality…power words rather than living words.

What a beautiful new Moon we have to look forward to this evening. May we all enjoy its beauty!

Prayer: Help me to wait on what’s waiting on me…


Image by courtesy of elizgarcia, at creative commons image licensing