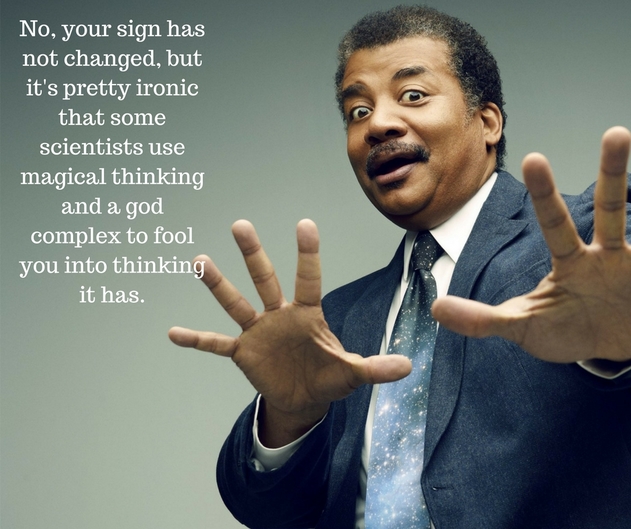 A number of people also asked me about this so called 13th sign. They also asked me, “Why was the number twelve chosen anyway?”

1. The average synodic cycle of the Moon (the time it takes for the Moon to go all the way through the zodiac before conjoining again with the Sun) is 29-30 days. The fact that the Sun travels roughly 30 degrees, in other words, by the time the Moon catches it again, moving at the rate of approximately one degree per day, gives us the 30 degree portioning of the circle as a symbolic division reflective of the relationship between the two luminaries. There are 12 portions of 30 degrees, and hence we get twelve unique portions or signs. These twelve signs are further broken down into groups of three signs per season, with the start of each new season coinciding with an equinox or solstice sign, the so-called “cardinal” signs. The symbolic seasonal division of the zodiac thus also arises quite naturally from the portioning of the zodiac into 12 signs.

2. There are also an average of 12-13 lunations per solar year, so we end up with twelve months (which comes from the word moon) per solar year.

3. This naturally raises the question, “But what about that 13th possible lunation? Doesn’t that point toward a 13th sign?” Actually, the 13th lunation is perhaps already an essential ingredient of the Moon’s astrological symbolism. The Moon generally goes through all twelve signs, plus one, before conjoining again with the Sun. And in the solar year there is often twelve full lunations, plus one. But rather than this funky remainder being an indication of a 13th sign it may be the exact astronomy that leads to several core lunar archetypes. For example, the remaining sign or lunation is the symbol of the child or the emergent life that comes out of or is the “remainder” of the union between the Sun and the Moon. The idea of the imperfect remainder is also a symbol of the realm of coming to be and passing away in general. The imperfect remainder is also a symbol of our lot or fortune in life…that portion of events, circumstances, luck, or chance that simply falls to us or is born out of luck and happenstance. And of course the Moon’s traditional symbolism is exactly related to the turning wheel of fortune, child birth, gestation, and the sub-lunar world of change and emerging and disappearing forms and happenstance in general. So the whole idea of a thirteenth sign is sort of obtuse when viewed from this perspective…the so called “empirical” demand for a 13th sign simply misses the implicit astrological symbolism associated with the imperfect remainder between the Sun and the Moon.

This leaves us with the question–so why does this story keep circulating? It happened again in 2010 and generally comes from the “scientific” community. We are left with a few possible answers. One is that this is actually rather benign and harmless….the result of an astronomer or two not taking astrology seriously and trying to make up a trendy blog story…and in fact like the trickster or fool, this may actually point more people toward astrology. On the other hand, it reflects how little astronomers actually know about astrology and the history of astrology. Astronomers are exposed as ignorant specifically for condemning astrology without any actual knowledge of even the basic astronomy of astrology. Worst of all it may reflect the desire on the part of the scientific community to replace, usurp, or condemn, the spiritual powers of nature and the human spirit in general. In this sense, the story represents an odd role reversal for astronomers. Once upon a time astronomers were persecuted by the church who had no real understanding of what astronomers were doing, many of whom were also astrologers, but now astronomers condemn astrologers, like a high catholic court of their own, without any real knowledge of astrology or its way of utilizing astronomy.

Last but not least, this story affords us an important opportunity for growth. The story itself is an omen. It is an appearance. A rising star that has returned and we should pay attention to as astrologers. The one reason that any scientist wouldn’t take astrology seriously is that they can’t buy into the idea that the planets are causing anything to happen. And as soon as we start trying to compete and prove that astrology has this particular kind of empirical/causal power, we will lose. Instead, we have to do things like discuss why the astronomical relationship between the Sun and the Moon leads to the symbolism of the number twelve, not thirteen, and we have to talk about why that odd sign/lunation remainder as an astronomical reality leads to certain symbols and ideas that form the theoretical constructs of astrology. This all together moves us out of the realm of causal or linear thinking and into the realm of symbol, myth, and metaphor, all of which arise from but are not the same as the physically predictable and objective movements of the heavens. Symbolic thinking is the best response to this kind of attack, in other words. Symbolic thinking literally demonstrates how the astronomical phenomenon is more than just physical…at least to us astrologers…and so if the debate is to continue, then astronomers will have to shift the terms of the debate to the legitimacy of astronomical symbolism, and quite frankly this is not something most scientists in general are prepared for, let alone astronomers who clearly know nothing about what they are criticizing.
​
Please feel free to share this with others if and when you see the story of a new zodiac and/or a 13th sign circulating in social media!