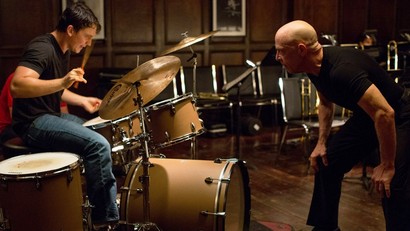 Dark Moon today. The moon in Capricorn will aspect Mars and Neptune in Pisces before joining up with the Uranus/Pluto square later tonight.

Reflected in today’s astrology is an important idea about legacy, determination, hard work, sacrifice, and accomplishment. A thought for us to work with today…”It’s not just the thought that counts.” Along with this we might add, “It’s not just the effort that matters. It’s not just, ‘giving it your best.’ And it’s not just, “the right attitude or what’s inside of you that makes you great or builds character.”

Each of the original statements being negated are of course deeply valuable insights and pieces of wisdom. They are reassurances and instances of self-acceptance or self-forgiveness, and they will remain as important insights because they are timeless. At the same time, is it possible that these kinds of statements have become empty platitudes? Is it possible that by saying these kinds of things SO frequently to ourselves and others that we’ve marginalized something else?

* You give someone a gift without doing careful research, without putting time and actual thoughtfulness into the gift. You spend a cheap amount of money, or you spend too much money without an eye for something special. You send a card but you don’t really write anything inside of it. You check a thank you note off the list. You give one of those, “future homemade gift certificates” and try to make it look thoughtful when the truth is you’ve got nothing invested in the other person’s happiness and you’ve spent all your money elsewhere.

* You want to be great at something and so you start in studying a new subject, or learning a new craft, hobby, or skill. You put in a lot of effort in the beginning, but then you get tired, bored, or lazy when the “new thing” becomes familiar, or difficult. Instead of deepening into the work, you get comfortable with where you’re at. You plateau and stay there. Your defense for the hard work of climbing up the next peak becomes the phrase, “I’ve given it my best, and that’s all I can do,” or “I’m trying my hardest.”

No. No you’re not. You’re letting yourself down and using an excuse. Developing just about anything to a high level of skill or mastery will require blood, sweat, and tears and hardly ever phrases like, “Well, that’s that, I’ve given it my best.”

* You want to change something about yourself, your body, your psychology or behavior, or some other pattern in your life. Maybe you change a few things but then some other things just won’t budge. So you start saying, “I’m valuable no matter what. At the level of my heart and soul I’m perfect just as I am.” But the truth is that you’ve taken, “I’m sick of myself,” a disapproving teacher who wants to make you better, and you’ve locked her in the basement and called her a demon or an untruth or a liar or a ruthless taskmaster, or whatever else. So now your inner teacher is gone, the only one who will tell you the harder truths, because you’ve used the cloak and dagger of kindness and acceptance on her, and now she’s forgiven to hell.

But regardless, that old teacher is still down there in the flames, and soon enough you’ll hear her truth speaking again, “No, you aren’t good enough just the way you are. You’re not valuable no matter what. Get off your duff and keep working.”

With Mars and Neptune conjoined in Pisces and the Sun culminating in Capricorn, we might be hearing the voice of THAT kind of inner teacher right now: the hard ass who is not impressed with our self-love delusions. Right now we might be more aware than usual of just how brief our lives are and how short the window is for us to grow into our true potential. What are we afraid of changing about ourselves that we know needs changing? Why are we so afraid of the commitment, focus, and discipline that it will take to go where we’re capable of going?

All of this is reflected in the Capricorn/Pisces combination in the sky right now, which reflects the desire for greatness, or the desire for transcendence, sacrifice, accomplishment, or legacy. A legacy can obviously be made in many unique ways, and not everyone is called to be a Mozart, but a simple point reflected in the stars right now is about looking at the way in which some of these platitudes about “already good enough” aren’t actually helping us. It’s a very touchy subject because those “already good enough” kinds of statements are also necessary in a world where the drive for success and legacy, when not grounded in the soul’s calling, can become ruthless.

All of this has been on my mind lately as I’m personally feeling the call to deepen some of my practices and “take my game to the next level,” so to speak. Whenever I feel this way it’s like that scary teacher is approaching me with his disapproving gaze. I get excited and nervous all at once. And of course there are times when the teacher is actually insane. The teacher has sometimes thrown chairs at my head to try to make me better, and I’ve reported him to the school board and started saying things to myself about how wonderful I am already. How it’s “the thought and effort that counts.” That’s necessary for a while when the teacher gets too nutty, but then eventually if I stay in “self love” land for too long, he always comes around again to call out my bullshit, and when he does I know it’s because it’s time for me to buckle down and work harder within the practices I love the most. It’s time to get better and stop making excuses for myself.

To close, last night my wife and I went to see the movie “Whiplash,” and the timing couldn’t have been any better. The movie (don’t worry no spoilers) is about the complexities of mastery and greatness, of discipline and hard work as well as its relationship with self love and acceptance. It’s about the teacher and the student, the Senex and the Puer, and it’s about the anxiety and discomfort of being pushed to our potential, as well as the fine line between pushing past limits and abuse.

In my experience of being immersed in New age culture for a decade, and before that Christianity since childhood, alongside a decade of drinking ayahuasca, we tend to embrace the self-love ideas far too quickly and dogmatically, which instantly demonizes the “hard line teachers” within us. Makes them into meanies or devils or unforgiving egoists. The reason I take the angle I take in today’s horoscope isn’t because I don’t value failure, mediocrity, self-acceptance, or anything else, but rather because my own path has taught me over the years to keep a watchful eye on the difference between self-love and excuses or laziness (something I’m still learning every new season!). Some might go so far as to say “self love” IS “hard work,” as well as all the other cuddly things, but I’m more inclined to say “self love” isn’t the only spiritual game in town. Can we stop making it all about “love” for even just a few minutes? Is it possible that our insistence upon love is like the upset stomach of an ego that’s simply eaten too much?

Can’t we leave room for the pursuit of greatness itself, along with all its contradictions and angst? Why must all roads lead us back to the sentiments of love? Maybe, just maybe, “it’s not just the thought that counts.” After all, as James Hillman liked to point out, the very same idea about thoughts makes us guilty of our thoughts rather than our actions. An impure thought is as guilty as an impure deed in a Christian world where all roads lead back to love and what’s on the inside is all that counts…

The film Whiplash is an excellent study of all these dynamics, and I would highly recommend it for anyone else out there who understands or feels resonant with these complexities!

Prayer: For today help me to stop making excuses and listen for the voice of my inner teacher, that scary looking one that’s saying to me, “No, you’re not already good enough. I know you can do better this.” Image by courtesy of Gabriel C, at creative commons image licensing