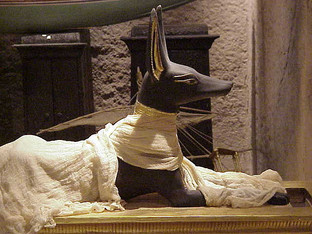 The Moon is in Scorpio again today, applying to square Mercury in Aquarius before entering Sagittarius.

Meanwhile, Mars is about to conjoin Uranus in the sign of Aries, as both simultaneously square Pluto. Quietly in the mix of this very intense dynamic is a trine to Mars/Uranus from Jupiter in Leo. A list of things to watch for and then a brief meditation on “mummies,” “oaths” and “oath keeping.”

* Injuries from the past, wounds from the past, patterns from the past resurfacing
* Preservation or protection of the past
* Flag waiving
* Surges of energy, plans of action, swift changes or reactions
* Breaking new ground
* Confrontation with authority figures
* Competitive or athletic bursts
* The subject of loyalty as a major theme
* Racial/ethnic/gender/historic/ancestral pride and conflicts pronounced
* Cleansing/purging/obsessiveness
* Independence and freedom versus negotiation and relationship
* Spring cleaning
* Impulse leads to accidents
* Unexpected discoveries, breakthroughs, windfalls, injuries
* Eruptions of unconscious material, possibly “past life” or “ancestral/family” patterns erupting
* Strong erotic/sexual desires or experimentation
* Life and death situations
* A history of violence, a pattern or cycle of hostility, a chance for peaceful resolution
* Inheritance and legacy versus pride and prejudice

Currently the planet Jupiter in the sign of Leo is acting like a bridge between the past (south node in Aries) and the future (north node in Libra), though getting Jupiter to help us toward the north node will take some work.

As Jupiter in Leo is something like a very large cat, and the north node in Libra represents the scales, there is an obvious but also enigmatic Egyptian mood in the stars right now. The Sphinx were large cat guardians of royal tombs, and the god Anubis (a dog headed deity), who also protected graves was said to be born of Bastet, a cat headed deity. Anubis was also a protector of sacred oaths, the god of mummification, as well as the deity that ushered souls into the Halls of Maat, where the soul (depicted by the organ of the heart) would be weighed against a feather to determine its fate in the afterlife.

Contained within these images there is an important set of clues that can help us navigate the current celestial weather toward the north node in Libra. First a few media mummification images:
* Ancient Chilean mummies at risk of turning to black ooze
* 1,000 year old Buddhist monk found mummified inside a golden statue of the Buddha
* 3600 year old mummy discovered in Egypt, but the identity of the body, thought to be a government official, is still unknown

Because we tend to get stuck in the past (south node), we have to see some of these images ironically in light of their astrological timing. How does the desire to preserve the past actually keep us trapped in a rigid mode of imagining? While the desire to mummify, memorialize, honor, and keep the past is common to most religions and cultures on the planet, throughout the entire history of the planet, some of these images also ask us to consider the futility of preservation. Eventually even mummies turn to black ooze. Eventually secrets are discovered or hidden truths revealed. Eventually the monk meditating inside the golden statue might want out, and eventually the Egyptian mummies’ names and ranks are forgotten.

We are religiously obsessed with the ideas of lineage, destiny, and dynasty. But what do these things amount to if the soul has always been, and will always be, eternal? What good are these careful preservations of the past once liberated from the Pharaohs notion that lineage and dynasty are what grant the soul its immortality?

As the planet Jupiter trines the south node and the Arian planets square Pluto in Capricorn, the drive to establish something immortal is very strong right now, and yet with the north node in Libra we are also coming up against the judgement of our work and worthiness, the weighing of the heart on the scales of truth. For those whose work has been for the sake of the soul’s freedom and evolution, rather than a stubborn clinging to the egoic past, there is an amazing opportunity for success and forward movement right now. The judgement moment of our coming eclipses around the Libra/Aries axis will grant some of us exciting new opportunities for growth and rapid evolution. At the same time, some of us will have to accept some deep disappointments, failures, and hard learning curves. Old dynasties are preparing to crumble…old mummies are turning black, and secret treasures once held inside the stones of the past are now glowing through to offer us their boons.

It’s a time when new oaths are being sworn and old oaths are expiring; the scale of truth as our witness. Hard as it is to swallow, dynasties unravel specifically because the process of mummification is not ever about the literal preservation of the soul but rather the imaginal preservation of the imaginal. The imagination wraps around itself whenever we recognize the calling of our soul and we swear that sacred oath to remain true to the calling until its time is up and it returns to black ooze again, back to the dark sea of the unconscious, the soul’s eternal memories of itself shining like white strips of bandaged light, floating on the waves.

Prayer: Help us to hear the words of our new oaths, and help us stop trying to preserve or fight for an old pattern whose time is up…help us to be guardians of the dead, but not thieves or hoarders of the soul.