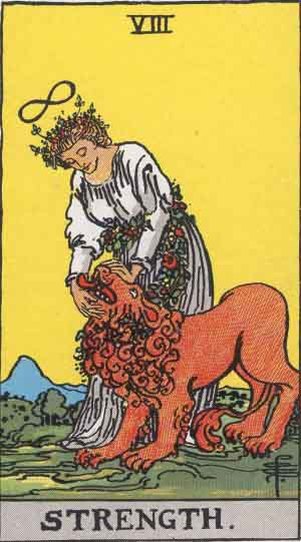 The Sun and Mercury are opposite Pluto.

In the I Ching there is a hexagram called “Great Strength.” The ideograms of the hexagram show a hulking strong man standing with his arms crossed, and below him is an ancient bamboo weapon. The image was of a lower class citizen whose duty it was to protect the royalty, like a body guard or police officer. The message of this hexagram has to do with the precarious fragility of great strength. The decision reads, “Great strength necessitates firm correctness.” In other words, where there is great muscular strength or the strength of arms, or the office of a warrior or guardian, there is also the need for firm ethical correctness. Why? Because this kind of strength ironically may be quite fragile and can easily swing off the handle violently and harm others or become corrupt.

This hexagram is also a commentary about the kind of strength that the government, or a ruler, should use for protection. Any strength employed by a government or ruler should be just as ethical as they are “strong” or well armed. And in fact, the intimation of this hexagram is that ethical firmness is the true meaning of strength, rather than the power of muscle or arms. This hexagram is also a teaching about the nature of corruption in government…when the ruling class employs savage warriors or guardians it is a reflection of the ruler himself (remember the ancient Chinese sages were not writing the I Ching in a democracy). Something that is inherently weak is easily triggered or is overly sensitive, and interestingly the I Ching associates this with overly macho displays of strength surrounding a ruler, and hence once more the reminder that “great strength necessitates firm correctness.”

One last dynamic of the hexagram that’s worth mentioning is the fact that the guardian is imaged as a very low class person, and hence the idea that people in power often use those who are in a weaker position to defend their interests on the level of sheer brute strength. If the ruler’s power is corrupt and the conditions of the lower class citizens less and less suitable, then he will essentially be arming his guardians for an eventual uprising, which has the potential to harm everyone in the state.
As Pluto and the Sun are opposed right now we are once again seeing the public face of a collective shadow. In the past day or so there have been two more shootings of innocent black men by white police officers. This shadow is complex because it is both racial and systemic. To use the 34th hexagram above, the corruption living in our criminal justice system is clearly a reflection of the corrupt “ruling interests,” of our society. Rather than being rooted in a true concern for the welfare of everyone, the system reflects radical self interest and fear of what is “other.” So long as the system maintains this fear, it is inherently weak. Just like the 34th hexagram maintains, our society will bear the outer appearance of strength while being far too fragile inside.

Pluto in the hard Saturnine sign of Capricorn, opposite the Sun in the vulnerable Lunar sign of Cancer, reflects this same dichotomy.

I was thinking to myself this morning, what can I do? And I’m sure others feel this way. You are numb to these media headlines, or you feel powerless, or even sick of your facebook wall being filled with so many platitudes that you question the sincerity of ANY form of condolence. Or the anger and outrage is so dime a dozen that the anger feels more like a fashion statement than a substantive outpouring. Or you are angry that people keep making it about race when you think it should go beyond race in order to heal. Or you are angry that people keep saying it should go beyond race when quite clearly it’s about race and we need to address it. Or you think to yourself, “What the hell does it matter what we’re posting on facebook anyway?”

This morning I received a letter from a friend of mine who expressed her deepest emotions about being black and what comes up for her when these shootings occur. She said, “I don’t want any assuring words about love or comfort. I just need to vent, and I’m venting to you because you wrote about collective shadows recently.” She went on to say that white people being afraid of black people is, in her opinion, a major collective shadow. My response was mixed. First I felt accused and almost mad. Then very quickly I felt helpless. Then guilty. Then insincere about anything I could think of to say. I agree with her, but sometimes I feel that the issue is so complicated there isn’t anything I can do.

Then I thought to myself…I’m tired of not having any authentic response to these tragedies. How can I respond to this from the heart? Even if it’s just today. What can I do?

My wife and I were sobbing while watching the Philando Castille shooting video this morning, and for me it doesn’t feel right to not respond and grieve in some way. I may not be able to respond to every last tragic t hing happening in the world, but when something really hits me in the heart, I can’t just do nothing any longer.

It happens to be my daddy daycare day today, and I’ve been wanting to see the recently opened National Museum of African American History and Culture, so that’s our destination. The best thing I can do today is something really small and simple. My daughter is too young to understand any of this obviously, but today is a great day, of many days to come, to consciously choose to raise my daughter without the fear of people whose skin color is different from her own. So we’re going to hit up the new museum and empower our minds. We’re also going to say a few prayers while walking the museum today for all of our black friends who unfortunately have to live in fear of our own police force. Not all police officers are corrupt, obviously, but there is clearly a systemic problem, and I hope my small action today will inspire others to feel and respond to these things from the heart.
​
Prayer: Remind us that great strength is nothing without the firmness of our virtues: love, peace, patience, and kindness.