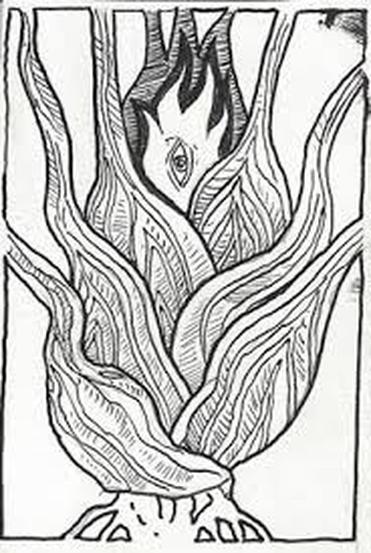 Mercury has turned direct but will be conjoined with Uranus until next Wednesday!

Here are some of the mythological themes to remember right now:

* Uranus is frequently associated by astrologers with the myth of Prometheus

* Prometheus stole the fire from Zeus and carried it away, concealed in a fennel stalk, to give to humanity

* The astrological Uranus is also associated with the story of the Greek god’s castration. After his genitals were flung into the sea, Aphrodite was born, along with the furies, giants and meliae.

For all of these reasons Uranus is also associated with the Jungian notion of “individuation.” In order to individuate we often have to break from the authority of inner complexes, gods, patterns, and forces that may have us in their grip. In order to individuate we have to become aware of what has us in its grip, and for this we need the metaphorical fire of Prometheus in order to illuminate our unconscious material. As we individuate we often experience a “breakthrough,” and this breakthrough is again associated with breaking away from the status-quo, from authority figures, and so forth.

Individuation can also happen too forcefully. We can become possessed by the God of individuation, Prometheus/Uranus, just as much as we can be possessed by any other unconscious complex. The rebel without a cause, the rule breaker, the iconoclast, the anger looking for a cause rather than the righteous anger of a principled cause, and the person who ruins homes, ruins friendships or relationships, all in the name of “becoming what I must,” …these are all instances of Uranus consuming rather than inspiring or cooperating with us.

Yesterday I wrote about the seeds of revolution needing to be kept secret or hidden and cared for carefully. Recall that Prometheus had to hide the fire he stole within a fennel stalk. What is the significance of the fennel stalk? Most obviously it is a means of transporting and spreading fire, but it also represents the idea of the containment, refinement and simultaneous distribution of knowledge. For these reasons Uranus is associated with space rockets, jet engines, and technologies of mass transit, that carry us from one place to another utilizing technological powers most of us do not understand…as well as the industrialization and the power and corruption within the industrialized, corporate world.

The suggestion to keep the seeds of our revolution within for right now, to not let the power, heat, and combustibility of its passion overwhelm us or puff us up with premature pride is rooted in the fact that Mercury and Uranus together have an incredibly powerful effect on the mind and speech, and while they may be changing our minds and hearts right now, or bringing some incredible turn of events for the purpose of our individuation, the moment is still young and the temptation to let these forces consume us is very seductive.

For as liberating as Uranus can be, he is also associated with the total mania and arrogance of knowledge and invention and its power to break barriers. Prometheus will be redeemed thanks to an immortal who becomes mortally wounded and would otherwise be forced to live forever with an incurable wound. It’s a dangerous thing to live possessed by the fires of immortal power and knowledge. It can be just as destructive as it is liberating. Hence again the admonition…keep this light small, tend to it like a hearth fire, know that you are not it and it is not yours, and trust the darkness from which it springs, around which it illuminates. Do not get lost in the light.
​
Prayer: Help us to stay present in the presence of your blinding lights.