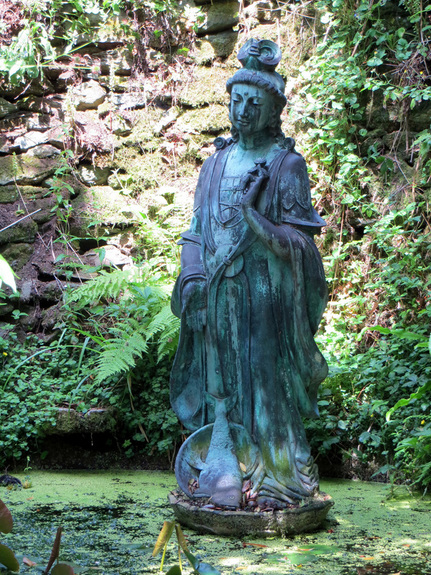 The Moon is in Scorpio today, still moving through the via combusta and potentially pushing things to the surface or shining a light on something hidden or lurking below the surface. An inspector found a problem with our water heater in the basement this morning…a new heating element is needed…cold, deep water, repair, financial setback…simple themes resonant with the Scorpio moon moving through the fiery road of the via combusta.

In the meantime, Mercury is stationing today and will be retrograde tomorrow. Yesterday we talked about Pluto turning direct in the midst of Mercury’s retrograde. Today let’s continue our Autumn astrology preview by looking at the upcoming Saturn/Jupiter/Neptune t-square.

As soon as Saturn enters Sagittarius he will square Jupiter in Virgo and Neptune in Pisces. Later in the year the combination of these three planets in hard aspect with each other will increase as both Saturn and Jupiter retrograde and eventually Neptune turns direct again.

Saturn in Sagittarius will be ruled by or interested in Jupiter. Since Jupiter will be in his detriment in Virgo, we’ll be getting a very specific set of archetypal themes and challenges to look at during the next year that Jupiter is in Virgo (he moves from Virgo into Libra by next September).

Here’s a list of what to watch for given this part of the three planet combination:

* The return to traditional forms of lifestyle or religion

* The “less is more” mindset, or austerity economics

* The corruption or reform of religious institutions or officials, as well as religious or political scandal and the subject of morality and values

* The positive versus negative uses of guilt, shame, and judgment

* The return of the small, the importance of discipleship, good habit, or reformed discipline or lifestyle

* Doctrine, dogma, principles, law, and the conquest of belief

* The clashing between generations and visions of the future (Old versus young, the passing of the torch, the withholding old person or old system, etc)

Taking all of these themes into consideration, we can now blend into the fold the general themes or archetypal presence of Neptune in Pisces:

* The romantic delusion, or the tendency toward intoxication or delusions of grandeur

* The victim, martyr, sacrifice, or saint

* Dreams, fantasies, and the presence of other worldly insights or yearnings

* The process or experience of disillusionment..to be suckered or to sucker someone else, to gain and lose it all, or to year for escape or deliverance

* Glamour, poison, deception, and the experience of loss or existential dread or vastness

Remember that Neptune is also in Jupiter’s sign, and so with Jupiter in the conservative, cautious, and somewhat puritanical sign of Virgo, we have to be especially careful about the way in which the past, the traditional, or the conservative can consume our thinking like a magical potion right now. For example, the widespread popularity of presidential candidate Donald Trump, or the intoxicating call for a conservative revival in the USA. This along side of Jihadists are all reflecting an aura of “witch hunting” or religious purification.

Perhaps its safest to say that some return of the conservative, some feeling of impending strong handedness, or stern judgment is impending no matter which way we look at it. However, the hope and prayer is that this time may also be one of religious, spiritual and moral reform. The prayer of Mercy might seem like the kind of prayer that’s a bummer to pray…people get understandably upset at the idea that behind or within the prayer for Mercy lies a lot of punishment and wrath. However, punishment and wrath, or judgment, are elements of experience that have an archetypal role to play in the unfolding of our consciousness. The idea of consequence is often dismissed because its thought to be antiquated, boring, or limiting. And yet however troublesome or offensive the idea of consequences might be for us, sages for thousands of years have taught us about the flow of the Tao from one thing to the next, from one action and consequence to the next. The fact to remember according to the great sages was that this casual appearance of fluctuation in time and space was both eternal and infinitely novel… beyond birth or death, beginning or end, and beyond naming. It’s within the intimacy we hold to this arcane and ungraspable insight that consequences becomes relatively inconsequential. Hugging closely to this elusive understanding is the word “grace.” Like an exhalation of held breath or the small smile that returns to our faces in the midst of a deep thought. The prayer of Mercy is the prayer that takes us into the lovers union with consequence, with cause and effect, and the cessation of that prayer is the gift of grace.

Prayer: Mercy, consequence, and grace, please be beautiful to our eyes and hearts.