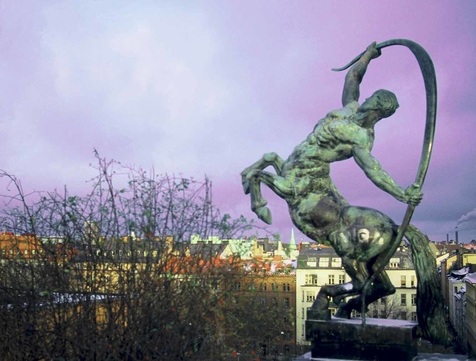 The Moon is in Libra today, just entering the via combusta and now applying to an opposition of Uranus and then a sextile of Mars.

Let’s continue today with our Autumn astrology preview by looking at Saturn’s entrance into Sagittarius.

Saturn will return to Sagittarius after it’s final retrograde into Scorpio. The themes of Saturn in Scorpio have been heavier for the past several years. From secrets, to endings and death, to unconscious patterns being exposed, to unavoidable truths and bottom lines, as well as emotional turmoil and the process of aging and maturity through hardship, suffering, and defeat, Saturn in Scorpio’s significations have been mostly heavy, hard, and intensely serious. In traditional astrology Saturn was considered the greater malefic because his nature was thought to be excessively cold and dry. His nature was therefore aligned with the autumn and winter seasons (having his exaltation in Libra, sign of the Sun’s fall, and his rulership in Aquarius, sign of the Sun’s detriment…not to mention Capricorn, sign of the Moon’s detriment). The word “malefic” originally related Saturn’s excessively cold/dry nature to the death of life in the plant kingdom. In this same way, Saturn brings endings, sobriety or dryness, focus and seriousness, and the wisdom that arises during times of constriction, hardship, and coldness. Saturn was also traditionally related to mastery, maturity, the wisdom of old age, commitment, solid foundations, elders, and the stoic’s passive acceptance of difficult circumstances.

Saturn in Scorpio has signified a time where loss, death, setbacks, suffering, and hardships of all kinds have exposed bottom lines and revealed to us the nature of things lurking in the unconscious. It’s been a lot to do about what we don’t want to look at or the patterns we deny or avoid that live within. But now the focus changes as Saturn enters Sagittarius.

The first thing we might notice is that by whole sign houses, Saturn will enter a new house in your birth chart. His focus in this arena for the next 2+ years will emphasize the natural content of this place in your life. Look to the natal position of Saturn, the houses Saturn rules (Cap and Aquarius), and the natal aspects to Saturn to see what constellation of themes might be coming your way.

Secondly, with the sign of the Centaur, Saturn may emphasize any of the following archetypal themes:

* A serious focus on old forms of wisdom, philosophy, religion, and belief
* Religious and ideological conflict, or the return of conservative values world wide
* Radical beliefs of all kinds colliding
* The death of the true believer
* Religious or doctrinal reform
* The death or downfall of priests, gurus or holy people generally
* The wisdom and sagely leadership of religious officials
* The ironic extremism of liberal beliefs
* Faith as commitment rather than blind positivism
* Walking our talk
* The difference between religious or spiritual lifestyle and religious or spiritual “talk”
* The general themes of focused conquest, adventure, and great athletic or physical achievement
* The conflict between rational and animal bodies, especially in terms of belief, ideology, and contending value systems or belief statements
* The rise of prophetic angst, warning, and preaching
* The sobering or maturing of nomadic or hedonistic tendencies
* The leaps and bounds of knowledge and understanding through committed study and higher learning
* The subjects of law, culture, and governance…principles versus personality
* The need for clearly defined beliefs, principles, and ordered structures in our lives becoming unavoidably clear

All of these themes and many more will permeate one area of our lives or another over the next two years, though again the specifics may be located through looking at the birth chart more carefully.

Prayer: Leaving deep water and following the torch light procession of all the old sages who have come before…help us to grow in our understanding, and may the right principles and teachings come into our lives like fiery guide posts along the way