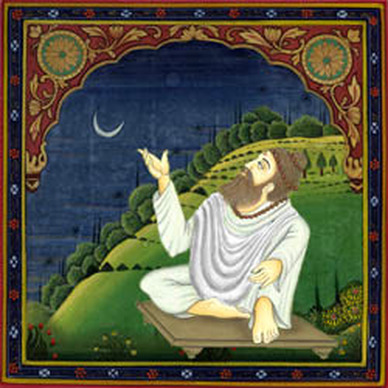 The Moon is in late Pisces, about to enter Aries.

In the 60th hexagram of the I Ching, the idea of regulations or restrictions is explored in depth. Confucius comments that heaven and earth are naturally ordered and regulated according to fixed and repeating cycles. He also comments that when rulers or nations create just laws and regulations excess and deficiency are both avoided to the benefit of everyone.
​
The image of the 60th hexagram features water over a lake, which is an image of the space or container that holds a great body of water.

However, the decision also warns against excessive regulations or restraints. Those regulations that are set in place to create moderation, taken to an extreme, cannot last.

This morning while studying the I Ching I was considering today’s astrology. The Moon will shortly enter Aries and apply to trines of Mars and Saturn in Sagittarius. The 60th hexagram came to mind as a symbol of the benefit (the Moon’s trine) of holding to our principles or regulatory practices (Mars/Saturn in Sagittarius).

However, with both Mars and Saturn retrograde, and with both planets in the superior position to the Moon, there is more nuance to consider. In traditional astrology planets in the superior position within a close, degree based aspect were said to “scrutinize” or “testify” to something about the planet they were seeing. In today’s astrology the Moon’s domicile ruler (Mars), along with Saturn, will be scrutinizing the Moon. Granted that the trine might suggest a beneficial or at least less harmful form or scrutiny, but nonetheless this dynamic is what led me to revisit the 60th hexagram this morning.
Just as Mars and Saturn in Sagittarius might be said to hold fast to their principles or their convictions, they could also be said to go too far or to hold on too tightly to their positions.

For example, in the 2nd line of the 60th hexagram, we see the image of a principled man who will not leave his house or courtyard when an opportune moment presents itself. He is stubborn and so principled or self righteous about his beliefs that he misses an important opportunity. In the 3rd line we then see the juxtaposed image of a person lamenting because they have gone too far with something and not followed the proper limitations or regulations. The lamenting stems from the recognition that, “I did this to myself.” The I Ching suggests this is a positive line, because even though there is lamenting there is also an important learning moment.

Translating this back to the astrology of the day, when the Moon comes under the scrutiny of its domicile ruler, Mars, by a trine, we might see the same kinds of themes. One theme might involve a positive opportunity arising (Moon moving into a trine), but a principled stubbornness (Mars/Saturn retrograde in a fire sign) causes us to miss the opportunity and so we regret our stubbornness later. Another theme might involve something presenting itself (Moon trine Mars/Saturn) and a lack of careful scrutiny (perhaps signified by the retrogrades, or the impulsiveness of the fire sign, or the nature of Mars/Saturn themselves) leading to excess or exclusiveness. The idea that we might learn from this, or lament having gone too far, is also indicated by the nature of the trine. There is something beneficial, in other words, about this entire dynamic, even if it involves some kind of rashness.

Add to this the idea of in-fighting. When the Moon walks into a superior trine from its domicile ruler, it’s as though someone we know or love or work closely with is offering us some kind of particular criticism or scrutiny, and yet the retrograde status of Mars, along with the co-presence of Saturn, might indicate that the advice is over the top, too rigid, or self righteous in some way. It may do more harm than help, in other words. This in turn might lead to in-fighting, or it might foreshadow changes within a hierarchical system of leadership or within a social framework. Where the Moon at first looks like she’s walking into an ambush, it turns out the ambush is an act of self-sabotage that eventually supports her in the long run.
In conclusion, when the second and third lines of the I Ching change, the 60th hexagram transforms into the 63rd, called Aftermath, which indeed pictures a transformation of circumstances such that chaos has been put into order again and a new regime or a new beginning of some kind has been established. The hexagram also warns that these cycles repeat themselves so we should learn from the dynamic that created the need for a new order in the first place…otherwise the pattern will only repeat and nothing of enduring value will have been accomplished.

It’s amazing that each day even the smallest planetary aspects in the heavens are ripe with wisdom. Talking about them as though they are mere “effecting energies that you will feel today” is misleading. Every transit is an oracle. Every transit is an act of speech that requires a specific kind of listening or “reading.” This is why I sometimes like to search for a good match from the transits to the I Ching or sacred scriptures. It helps me to remember that every planetary motion is also like a small morning lesson or riddle, given specifically to teach us how to think as much as it is “predicting” something concrete.
​
Prayer: Help us to move according to the regular intervals of nature…so that we might avoid the excess of principles or the lack of principles alike.