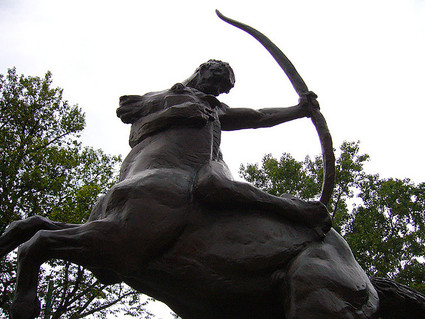 The Moon is in Aries this morning, and the Sun has just entered the sign of Sagittarius.

First a thank you to everyone who contributed yesterday to a fast start to my kickstarter. In the first day of raising funds we’ve crossed the $2,000 mark on the way toward our $7500 goal. If you read my horoscopes or if they have made an impact on your life in the past year, please consider contributing to another year of daily horoscopes in 2016! You can visit the kickstarter link here: https://www.kickstarter.com/projects/1163009170/nightlight-daily-horoscopes-2016. Every little bit helps, and today I have posted a new reward tier. If you contribute $75 to my kickstarter you will receive a special year ahead, personally recorded Tarot reading (sent to you via mp3). I’ve made a limited number of these available, so contribute today while they are still around. Last year they went pretty fast!

First let’s recall a simple fact that many people who study astrology don’t know about. The zodiac sign’s meanings were not originally derived from constellation images. In fact, the zodiac itself is better understood as a mathematical and numerological system of divination whose perfect twelve divisions are only meant to be loosely signified by the constellations in the sky. In fact, if you simply look at the zodiacal constellations along the ecliptic you’ll quickly realize that they are unequal and don’t make very good mapping tools in this regard.

Personally it took me a while to actually feel the significance of this simple observation in my work. In ancient astrology the signs were called the houses or domiciles of the planets. What we now call “houses” were actually referred to as “places,” whereas the word “house” would have been more appropriately describing a sign. So, for example, Sagittarius might be poetically referred to as the celestial mansion or home/house of Jupiter. The realm of Sagittarius is thus not the realm of the constellation of the Centaur, but rather the Centaur is a sign post in the sky that refers TO the mathematical division of the ecliptic that lands between 240 and 270 degrees of the ecliptic, starting from the vernal equinox point. That 30 degree division falls during approximately the last thirty days of Autumn and leads to the Winter Solstice at its conclusion. This thirty degree division was referred to as fiery and common or double bodied, a time of year or a place in the ecliptic that shares in both the most stable qualities of Autumn and the onset of Winter. An area of the zodiac that was considered masculine, and the qualities of fire associated with the sign were heat and dryness. The Centaur was the constellation image for this domain. I now like to think of it like the banner or sigel of a celestial tribe, realm, kingdom or family. Maybe I’ve just watched too many Game of Thrones episodes! However, it is interesting to note that the word “sigel” actually means “Sun” in old english, and sigels were commonly thought to have symbolic/magical properties.

The reason I’m laboring these points is that it can help us to step back and see the signs in terms of these very vast realms of the planets, rather than immediately jumping into archetypal or psychological or personal possessive language. Like “Sagittarius’ are cocky and wise,” or “Sagittarius’ love to party and travel,” etc. Or even laboring long explanations about the mythic symbolism of Centaurs. To make a literary correlation…if you’ve read the Game of Thrones series, you know that each family has a sigel. So the Starks have the dire wolf, the Lannisters have the lion, etc. But what makes game of thrones so interesting is the way in which each unique character, while bearing some resemblance to their sigel, has their own destiny or fate that is far too complicated and specific to be adequately summarized by their sigel.

I think similarly about the fact that I’m from Minnesota, which gives me a certain amount of credibility, for example, when discussing the TV series and film, “Fargo.” I hail from the land of Minnesota, which is kind of like saying I was born while the Moon was in Cancer or Jupiter was in Sagittarius (the home signs of these planets). Within the conversation about Fargo, I have a certain amount of authority on the subject because I bear the mark of Fargo’s celestial sigel on my very polite, mid-western forehead. But now I’m living in Maryland, vis a vis New York City and a long excursion into Amazonian psychedlic shamanism. In those realms I am very much a “guest” and not at all the expert. Those sigels are not my home sigels, you might say. Yet now I know something about them…

For example, when people ask me to talk to them about Ayahuasca or someone who has never lived in or been to NYC asks me about it, I have some experiences to draw on, but even so my experiences refer to landscapes and social/cultural niches that are tremendously vast and more foreign to me, and so I have to speak about them with far less topographical expertise or confidence than I might speak about the realm of Minnesota.

Zodiac signs are like celestial dimensions. So how much more vast are these realms from the vastness of the human realms we still find ourselves tremendously overwhelmed by?

How big and wide and diverse is the masculine/fire realm of Jupiter? Last time I checked Jupiter could have almost become a star. And while I love the mythic image of the centaur…it’s also a practice for me to see the constellation image like a simple sigel or banner waving above the gateways to a land that has too many entrances to count, and too much land, space, terrain and depth to neatly summarize by words like “journey, higher learning, and freedom loving.”

When mythology becomes typology, we forget the vast realms from which the planetary symbolism lives and breathes and flows forth into our lives.

So for today, I’m standing back and choosing not to talk about Sagittarius (just for today) in terms of “types of people” or “myths become behaviors.” Instead I’m seeing a tremendously large gateway opening into a vast realm, the celestial home of Jupiter. Above the gateway I see a banner blowing in the cosmic winds of deep space…the image of a Centaur.
​
Prayer: Helps us to recognize the home lands of the planets, rather than shopping at the touristy adjective stands outside their gates…