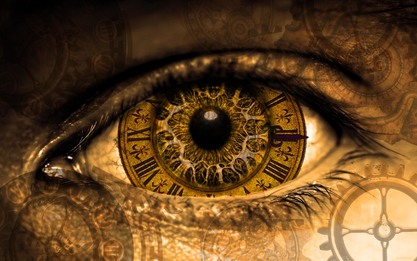 * Saturn entering Capricorn, first and foremost, means that Saturn is entering one of its two home signs. Capricorn is Saturn’s feminine/yin home. Capricorn is an earth sign and it is a tropical sign.

* Today we’ll look at the tropical nature of Capricorn. The word “tropical” is related to the Greek word “tropos” which means “turning,” but also “adopting a new manner, way, character, or course of conduct.”

* You can think of the quadruplicity, or what we call the “modality,” of a sign as a quality of time that planets express when they are transiting through the sign. Tropical signs indicate pivotal turning points for planetary signifiers. A planet is always signifying something when we look at it in astrology. It may represent something mundane, something we read in a daily horoscope meant for everyone, or it may mean something very specific within your own birth chart (or transits to your birth chart). Regardless, when a planetary signifier changes signs and enters a tropical sign it takes a dramatic turn, and it changes its manner, its way, or its course of conduct.

* This kind of change actually occurs whenever a planet changes signs, in general. When a planet enters any new sign within the system of whole sign houses, for example, an entirely new set of topics are activated or brought to light in your birth chart.

* We can think of the tropical signs as those that are initiating a more dramatic turn of manner or conduct.

* Saturn is coming out of a double-bodied sign (or what we call a “mutable” sign in modern astrology). The quality of time that planets express during transits through double-bodied signs is transitional. There are themes of both stability and instability or initiation and maintenance, alternating somewhat regularly. During a planet’s time in the solid signs (or fixed) the quality of time is more repetitive, enduring, stable, stubborn, and even stuck.

* For example, Saturn was last in a tropical sign between November of 2009 and October of 2012 (Libra). Then it moved into a solid sign (Scorpio) from October of 2012 to December of 2014 when it entered a double-bodied sign (Sagittarius). If you track Saturn during those times, in relation to a particular theme or topic that Saturn might rule in your chart, you may notice the general qualities related to each modality.

* For example, Saturn happens to be my career house signifier. During 2009 to 2012, during a tropical period, I was initiating my career as an astrologer, my first book was published, and the entire period reflected the tropical themes of a critical turning point. Saturn’s tropical turning points last several years. Then during the Scorpio/solid years, I was establishing my business and our yoga studio with my wife and was married. Then during the double-bodied period, my career began to slowly shapeshift as I began to focus on daily horoscope writing and traditional forms of astrology. So the Saturn in Sagittarius period, for my career, has been mostly a transitional period, with lots of starts and stops, periods of initiation and stability followed by disruption, change, and newness, back and forth. Predicting the movement of Saturn in my own birth chart, I would anticipate that the next several years would initiate another critical turning point in my career, where the manner/way/conduct/character of my career would go through another pivotal change.

* If you know the topics/houses that Saturn rules in your chart, you can try tracking the development of those topics yourself. Just remember, think very generally and broadly about the “quality of time” that Saturn has been expressing in relation to the topics it rules. I’ve found this to be a very useful exercise!

* Saturn is also related to “Time” in general. Saturn is sometimes said to be the ruler of “Time.” I think it’s important to remember that first and foremost, time is itself archetypal. For example, Plato wrote, “Now the nature of the ideal being was everlasting, but to bestow this attribute in its fulness upon a creature was impossible. Wherefore he resolved to have a moving image of eternity, and when he set in order the heaven, he made this image eternal but moving according to number, while eternity itself rests in unity; and this image we call time. For there were no days and nights and months and years before the heaven was created, but when he constructed the heaven he created them also. They are all parts of time, and the past and future are created species of time, which we unconsciously but wrongly transfer to the eternal essence…”

* I will never forget in an ayahuasca ceremony, years ago, the medicine showed me a fascinating image. I asked the medicine, while deep in a trance, “What does it mean when astrologers say Saturn “rules” time?” And the medicine showed me an image of the nature and quality, the experience of time in relation to the eternal soul or consciousness, changing as Saturn changes signs. Then the medicine also showed me an image of the inherent impermanence of all seasons of time. When its a time of initiation we crave stability, and when it’s a stable time we crave change or unpredictability, and so forth. The medicine said something like, “People labor and suffer with time to the extent that they do not understand that time itself moves like the changing seasons or like the wind and rain.” I asked the medicine, “Is this why Saturn is considered the great malefic?” And the medicine said something like, “Yes. Because people tend to take time too literally, they become prisoners of it and they stay stuck in its endless cycles.” But then the medicine also, and immediately, showed me the vision of ancient astrologers and stargazers, pouring over maps, utilizing all kinds of instruments, and essentially studying and mapping the multidimensionality of time. The medicine made it very clear to me that Saturn is also related to contemplatives, mystics, and those who study laws and boundaries specifically to come to and through the limits of limits.

* So watch as Saturn changes signs. Watch as the times change. The times are always a changin, because, as Plato said, “time is a moving image of eternity.”

**Did you enjoy today’s Saturnian sojourn? If so, please consider pitching in for my annual fundraiser. I spend 2-3 hours each day writing and crafting these horoscopes. Your support is deeply appreciated. Anything you can donate will help!Find the details here.
​
Prayer: Teach us to see you at all times, in all seasons. Teach us to trust the times and the change of times.