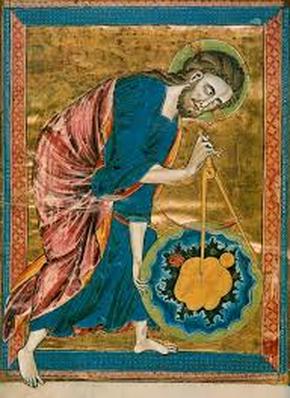 The Moon is in late Aquarius today, applying to trine the Sun in late Libra. Meanwhile Venus, Jupiter, and Mars continue their triple conjunction as early morning stars, and Mercury is moving into a square with Pluto. Meanwhile Saturn is approaching a square to Neptune. So today, a meditation that is Saturn/Neptune inspired…

As I’m currently studying the astronomy of calculating birth charts, I’ve been surprised by how much the mathematical side of astrology has to offer us. For starters, even after you learn how to do the necessary math for constructing a chart, we still don’t perform the majority of the work provided to us by the Ephemeris, the Atlas, and a book of tables.

As I’m trudging my way through this material it occurs to me that modern astrologers (including myself) may suffer from “say anything” syndrome. We can make the symbols say too much because in place of the pain staking and precise work of astronomical calculation or knowledge in our craft, we now have the concepts of the transpersonal, the multidimensional and cosmic multivalent psyche, alongside of depth psychology, personal growth, quantum uncertainty, and the idea of an endless/infinite cosmos. We can say anything and just sort of nod at each other…”Yeah, you know it too don’t you! This shit’s all infinite. Everything is everything. You’re a Scorpio so I know you know it!”

I don’t mean to make an idol out of the math and science of astrology, that’s would be annoying, but yesterday as I finally started to wrap my head around some of the physical laws and concepts that bring the structure of a chart together, I had a small “Eureka!” moment. I can’t put it all into words just yet because I’m still in the midst of studying these concepts, but sufficed to say it had something to do with the pain, the labor, and the realization of just how much Saturn (you might say) is working in the midst of our field.

In our obsession with personal growth and free will, or the super sexy “evolution,” we sometimes forget that astrology is largely about understanding the nature of fate and destiny. Whether we see the birth chart as a set of possibilities, an outline for evolutionary potential, a blue print of character, or a highly deterministic forecast of life events, we are inherently suggesting that certain elements of life are fated.

Some people have related this idea of “fate” to the idea of the daimon, or the soul guide/image. From this standpoint the birth chart is filled with the images of our path to the realization of this overarching divine image that lives within us. Our free will is part of how this divine image comes into being, but it is also to a certain extent beyond our control. As Auden once wrote and James Hillman loved to quote, “We are lived by powers we pretend to understand.”

On the other hand, why are we so obsessed with reaching some golden image of our potential? We love to imagine our lives as being a story about growth and development, but aren’t there other metaphors or myths available to us? I recently heard an astrologer say something like, “people stop evolving, and it’s a great sickness.” But I often feel the problem is just the opposite, “People won’t stop trying to evolve, and it’s a great sickness.” There is something wonderfully liberating about letting go of the endless and monotonous task of trying to become something we’re so certain we’re “here to become.” There is something liberating about the idea that our lives are not our own, and that by contemplation of the greater celestial laws that we can’t help but participate with, we are set free…even while losing ever more of our freedom to the vision of our fate or the unavoidable nature of circumstances. Now that’s a real paradox!

I don’t consider myself deterministic in any ultra strict sense, and I of course still value quantum indeterminacy, multivalence, infinity, and all other mind shattering concepts that challenge the standard “linear” ideas of cause and effect or the image of a strictly mechanistic universe or creator. Add to this that I don’t think astrology should try to map out every last deterministic detail of our lives, nor should it eliminate the idea of participatory magic or the co-creative capacity of consciousness. The simple realization for me in studying the incredibly rigorous but beautiful math and science behind astrology charts lately has been that without reminding ourselves of the limits and bounds that fundamentally ground our craft, we float too freely in the ethers of relatively unbounded concepts about ourselves, the universe, evolution, indeterminacy, and free will. As a result our field is sometimes nothing more than an ambiguous feeling mass of endless adjectives describing nothing and everything at once…all of which has something vaguely to do with “personal growth” or “spirituality.”

It’s as though the patron of our field has shifted from Saturn to Neptune in the past few centuries, but we haven’t properly realized it because Neptune’s invisibility, distance, and vast imaginative power has taken us so far “beyond” Saturn that we now feel fundamentally at odds with Saturn while intoxicated by Neptune…as though trigonometry is the new sinfulness and precision or prescription or reason are the newest form of fascism.

I’ve been incredibly inspired lately by the work of Chris Brennan, Benjamin Dykes, Christopher King, and a number of other traditional scholars of astrology whose line of work I had found myself generally opposed to for no apparent reason other than my love of infinity, psychedelic states of consciousness, and my general fear of details, math, and more challenging levels of reading and study. But as soon as Saturn entered Sagittarius last winter and began his square to Neptune, I suddenly found myself incredibly tired of humanistic, indeterminate free will astrology. I found myself worn out with the unbounded concepts of evolution, divine potential, co-creativity, and psychological infinity. I felt infinity’d to death, you might say. And at the very least I longed to study something new and challenging to my assumptions. Since then, I feel that Saturn and Neptune as the patrons of two entirely different eras of astrology, have been working together within my life to bring about a new form of astrological practice and inquiry. Naturally I’m at a phase in this process where I feel that I’m sort of returning to understand what might be called “the dignity of Saturn.” With the Moon in Saturn’s favorite sign today, it feels appropriate to write this small ode to Saturn. At the same time, it would be a mistake to throw out infinity (I’m not sure that’s possible?) or what the invisible awareness of the outer planets and humanistic, self-realization style astrology brings to the table. In some ways I now see modern astrology with its emphasis on personal growth like an elaborate play on the old use of talismanic magic by certain kinds of ancient astrologers. It’s not necessarily new to think that our chart is more or less rigid or fixed. These debates have raged for a few thousand years…however our current fixation with the total potentiality and freedom shown in the birth chart seems to be leaving my system…as if I’m coming out of a strange bender. My initial grouchiness toward the Neptune fog of modern astrology feels like it’s part of the process of initiating a new phase of learning…just like a hangover makes your head hurt and it makes you somewhat irritable the morning after.

Sufficed to say, studying the celestial mechanics, alongside of some very challenging old texts and concepts, has put me in touch with a new way of pondering what I do…and for me these changes are the equivalent of a deepening prayer life.

Prayer: Open our minds and hearts but also show us our limits, so that we might imagine ourselves and our circumstances within the time and place of our souls…fashioned and forged in the mind of a divine intelligence far more precise than the word infinity sometimes has room for