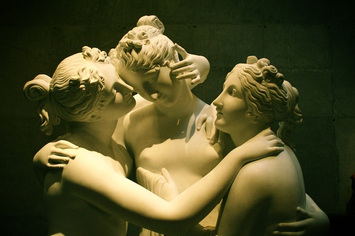 Today the Moon is in Aries, applying to conjoin unpredictable Uranus while it squares eruptive Pluto. Should be an interesting day!

Since the Venus/Mars conjunction in Aries is exact right now, and since many people have been viewing its beauty alongside of the Moon in the western sky, let’s take today’s horoscope to look at the Venus/Mars conjunction from yet another angle (I’ve already covered it several times in recent weeks, but aren’t there esoteric bookshops in every city from here to infinity? More!).

First lets start with some favorite images of the red woman:

Each of these images of woman we may find within ourselves right now, regardless of whether we are male or female, straight, gay or anywhere in between. What’s so compelling about astrology is that it challenges us to see the autonomy of a great variety of gender images in terms of the imagination first. Feminism isn’t just about women, in other words, but perhaps even more primarily its about the pantheon of feminine images. Feminine deities. Feminine attitudes. Some of which are more butch or masculine than others. Some of which are more androgynous. Some of which are more domestic or worldly or otherworldly. Which do we emphasize more, the unitive sense of “the feminine,” or the particular images? By emphasizing the unitive banner of “THE” feminine, is it possible that one of the more masculine images of the feminine is speaking? Doesn’t “THE” feminine point to the bold leadership qualities of Venus in Aries? At the same time, doesn’t the singularizing force of Venus in Aries unfortunately emphasize a more masculine vision of feminine? Doesn’t “THE” feminine ironically overshadow so many other feminine deities with its monocular vision? Is this why Venus in Aries was traditionally considered to be in her “detriment?” Surely the feminine needs a rallying cry and some leadership…..or does it? Nothing might piss Venus in Aries off more than suggesting that her fight isn’t on behalf of THE feminine, but rather her SELF. Nothing might irk a feminist warrior, flying the flag of THE feminine, more, than suggesting she’s simply projecting a wish to belong to club “dude.”

As soon as we start defining the feminine, trying to unite it, bring it together, focus it, strengthen it, unify it, empower it, or whatever else, in other words, we have to consider the idea that we are secretly caught in the Mars ruled land of Venus in Aries.

In this strange and reddening region, it’s possible that a woman’s idealistic love for other women, women’s battles for “women as a whole,” can be the secret expression of an ashamed or unconscious masculinity, a covert selfishness whose support of “diversity,” is actually a kind of sexualized desire for more and more of what is the “same as itself.”

This homo-erotic longing for sameness has been commented on since as far back as Plato’s ideas about a male ruled utopian republic. The more “ideal” and “unifying” we get, the more “masculine” we might even say, the more we crave sameness and the more likely we are to project this sameness onto anything and everyone. When we “see red,” it’s hard to see ourselves seeing red, and so even though we might like to think we’re defending diversity or marginalized images or peoples, it could be that we’re caught in the homoerotic red frenzy of Venus in a Mars’ ruled sign.

Now. Take all of this and throw it out. We’re too quick to feel indicted. Venus in Aries is too quick to feel defensive and misunderstood and reactive. Isn’t it also true that like cures like? Isn’t there something about strengthening and focusing the many diverse images of feminine that helps? Helps what? Helps “combat” the tendency for the feminine to be simplified into one single image of feminine in the first place! It’s a strange paradox, but can’t advocacy of the feminine into a relatively more unified field, complete with respect and awareness of all the contradictory images of feminine be a good thing? Can’t we use a little of that monocular/masculine focusing like a counter-jab to the tendency for a masculine dominant world to overly simplify the feminine? Can’t we unify into a feminine roar? Why the hell not?! Might it not be Mars’ overly simplified idea about himself speaking when we say that the feminine can’t contain within its multitudes an image of mars as well? Isn’t that his secret weapon of repression…”you can’t get angry because that makes you a man and aren’t you here to support women?”

Since my twenties, every single woman I’ve dated exclusively for a longer period of time has at one point had a romantic relationship with another woman. I have always been attracted to Venus in Aries. I find her version of inclusion the kind I like…a woman within me whose not ashamed of her manhood. As a Cancer male with Pluto in Libra squaring both my sun and Moon, I find the fiercest, most masculine “advocacy” of diversity and particularity to be like an inner isle of Lesbos, where both Sappho and Aristotle alike are constantly being reborn. I sometimes feel like I’m a lesbian inside a man’s body. Sometimes it feels like an ironic curse of some kind, and other times it feels like just the kind of whoopee weed I’m glad I’m smoking.

We’re so quick to get impatient with the complexities of gendered archetypal images. We have no tolerance for intolerance and we have no intolerance for tolerance, usually at all the wrong times. We resist gender in gendered ways and we love gender in completely unimaginative ways.

Even now as I write…I’m not sure I’m seeing anything real…just that lovely, deep red.

Prayer: help us to redden our red