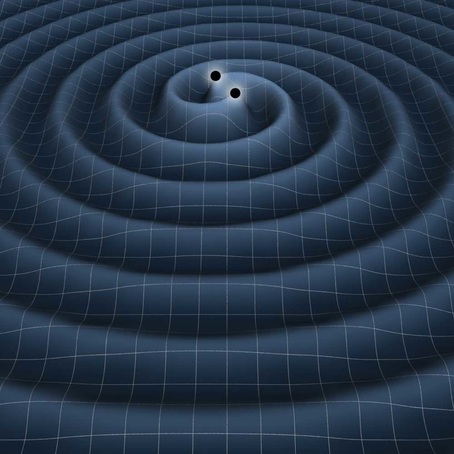 The Moon is in Aries today, applying to a sextile with the Sun and a square with Venus.

Back in September I wrote a daily horoscope that said over the next year, as Jupiter is in opposition to Neptune, we should expect exciting leaps and bounds in our scientific understanding. I mentioned several important scientific achievements that took place under previous Jupiter/Neptune dynamics, including the launching of the Hubble telescope, discoveries that expanded our imaginative vision of the cosmos. Similarly in another post later in the fall, while looking at Saturn/Neptune dynamics I talked about discoveries or events that lead to important restructuring of our beliefs or paradigms..fundamental shifts in our structural understanding of reality or the Universe. These are archeytpal dynamics that reflect the combinations of Jupiter/Neptune and Saturn, and yesterday I was very excited to hear the announcement that gravitational waves have been discovered, effectively proving the last of Einstein’s predictions about general relativity. I don’t mention this to credit myself as some great astrologer. These ideas are accessible for anyone who has spent time with Richard Tarnas’ work on the archetypal dynamics of the outer planets. Still, it’s amazing to see astrology’s predictive abilities succeeding!

At the same time that I’m so excited for this discovery, especially what it might tell us about the genesis of our Universe, I’m also sad that we are still largely missing an imaginative or spiritual vision within our scientific modeling. Explaining how something worked, or how something happened, without asking the question “Why?” we are inherently choosing to devalue the question without any good evidence or grounds for doing so. This is hardly scientific. And it’s hardly satisfying to the soul, for the life of the soul, to say “Just because that’s the way things happen in a physical/causal universe.” This isn’t an answer to the question Why but a value based judgment against the purposefulness of the question “why?” As CS Lewis wrote about the emergence of new cosmic models in place of the old and richly imaginative ptolemaic cosmos, “I hope no one will think that I am recommending a return to the medieval model. I am only suggesting considerations that may induces us to regard all models in the right way, respecting each and idolising none. We are all, very properly, familiar with the idea that in every age the human mind is deeply influenced by the accepted model of the universe. But there is a two-way traffic; the model is also influenced by the prevailing temper of mind. We must recognize that what has been called “a taste in universes” is not only pardonable but inevitable. We can no longer dismiss the change of models as a simple progress from error to truth. No model is a catalogue of ultimate realities, and none is mere fantasy. Each is a serious attempt to get in all the phenomena known at a given period, and each succeeds in getting in a great many. But also, no less surely, each reflects the prevalent psychology of an age almost as much as it reflects the state of that age’s knowledge…”

Lewis goes on to suggest that how we ask questions of the Universe, and why we look for the evidence we look for, is in part the shape of the Universe we find. These are Saturn/Jupiter/Neptune remarks: “The new model will not be set up without evidence, but the evidence will turn up when the inner need for it becomes sufficiently great. It will be true evidence. But nature gives most of her evidence in answer to the questions we ask her. Here, as in the courts, the character of the evidence depends on the shape of the examination, and a good cross-examiner can do wonders. He will not indeed elicit falsehoods from an honest witness. But, in relation to the total truth in the witness’ mind, the structure of the examination is like a stencil. It determines how much of that total truth will appear and what pattern it will suggest.”

These are words that apply to our own questioning of the Universe, as well as the scientists. The questions for this year, once more, read: “What questions am I asking about the things I believe and assume to be true? How do these honest questions lead to a different paradigm or a different reality? How does my life change to reflect a new imaginative structure or new paradigms emerging?”

​Prayer: Teach us to see the nearly invisible lines of our ideas, like a stencil…then help us to close our eyes and witness a 1.3 billion year old event, rippling forward in time, sending waves and moving through our lines just now.