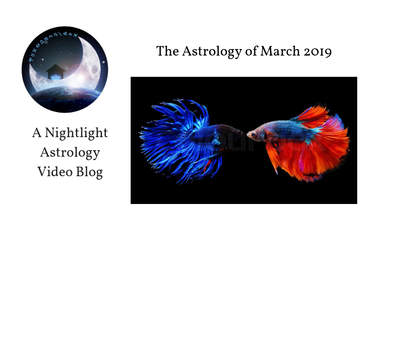 ​The month of March, 2019, presents a variety of interesting transits…check them out!

March 1st: Venus squares Uranus, bringing themes of shock, disruption, liberation, and revolution into a tense relationship with the Venusian themes of love, harmony, beauty, and the goddess.

March 6th: A New Moon conjunct Neptune while Mercury is also stationing to turn retrograde in Pisces brings a wave of other-worldly, transrational energy. The Moon cycle ahead will bring themes of imagination, mysticism, transcendence, and unity, along with the potential for deception, illusion, secrecy, fantasy and fanaticism.

March 6th: Uranus also enters Taurus, bringing the planet of emancipation and disruption, originality and defiance, out of the Mars-ruled sign of Aries and into the earthy, feminine, Venus-ruled sign of Taurus. It shouldn’t surprise us to see some shock waves in relation to topics like the environment, women, relationships, and sexuality in the weeks to come. We will revisit this one in greater depth again once I’m back from India!

March 14th to the 19th: Mars will make trines to Saturn and Pluto from Taurus. This is an industrious and hard working period. The god of war, Mars, in the earthy/sensual sign of Taurus isn’t perfectly comfortable, but with trines to Saturn, god of necessity, and Pluto, god of the underworld, there is an aura of productivity, steadfastness, and relentless will power that should it be put to good ends will deliver good results.

March 20th: the Sun moves into Aries for the Spring Equinox and immediately conjoins Chiron in Aries, just as the Full Moon is appearing in the scales of Libra. This year’s equinox announces a moment of greater healing and transformation in relation to leaders, anger, war, violence, and masculinity. It might be said that this zodiacal year is toned by the need for direct healing contact with anger, aggression, willfulness, and the “yang” energies of the world. However, with the Full Moon in Libra, a Venus ruled sign, themes of justice, balance, beauty, and fairness will be equally pronounced.

Between March 24th to the 29th: Mercury will conjoin Neptune, turn direct, and then conjoin Neptune again by direct motion heading into April. This is a long time for Mercury, in its detriment and fall, to go through a conjunction with Neptune. We should anticipate a period of non-ordinary consciousness, synchronicity, and non-linear thinking to be pronounced. However, we should also be on guard against confirmation bias, wishy-washy thinking, a lack of rational discernment, or blurred boundaries.