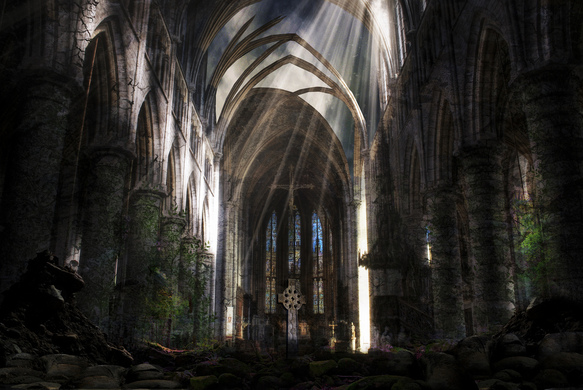 The Moon is in late Virgo today, and Venus is about to enter Scorpio later today. Meanwhile Mars in Libra is moving toward his square of Pluto and opposition to Uranus.

With Neptune and Saturn in close square to each other and Mars triggering the Pluto/Uranus square, one theme that comes to mind, one that’s been a part of my prayers lately, has to do with the ancient roles of priests within a community. Last week I went to a Catholic Mass because I realized I had never been to one before, at least not since visiting my grandmother sometime when I was a kid.

I went to the service, and though I was looked at rather suspiciously, for the most part everyone was welcoming. I could barely remember any of the prayers (I knew some of them), and there was more standing and sitting alternatively than in the protestant churches I grew up in. All the same, it was nice to be among the pews and stained glass, the icons and images, the hymnals and the organ and choir. As far as aesthetics are concerned, the experience filled me with something beautiful and mysterious and good.

Then the priest gave his message, and it was on the awe and majesty of “standing before the lord in his real nature.” He went to great lengths to describe overwhelmingly large ideas and images about our universe in comparison to the size of our earth, and each time he finished a lengthy cosmic description he said, “How much greater will God be when we stand before him?” Essentially by the end his message was, “Let’s remember this vastness everyday so we’re not knocked over by it on judgment day.” The last part was over the top for my taste, but I appreciated hearing someone speak about the vast size and scale of things.

Afterward, sitting at home, and for several days since, though I have no interest in the ministry, I felt sad that the “priestly” roles that so many people I know are assuming in their everyday lives are not as recognized, respected, or supported in our world. Unless you are being supported by a large institution like a church or charity, a government program, etc, it is very hard to follow a personal priestly calling. I think of acupuncturists, massage therapists, yoga teachers, astrologers, and herbalists, and I see a crowd of my fellow “clergy.” I see the sacrificial garbs, and I see lives of profound devotion. I see various holy scriptures practiced or recited daily, and I see a lot of sacrifice and service to others, and yet I see a tremendously more painful and confusing path to being basically supported in these callings.

For example, I see a far greater amount of social stigma surrounding these roles, and I see the struggle to earn a living in the world, or to be taken seriously by friends and even family. I see the struggle to know the right way to earn money or promote ourselves by these trades, and I see harder standards unfairly applied to us without the recognition that we are in many ways “on our own.”

I see this as a Saturn/Neptune dynamic, but I’m also sensing that something like the reverse of this is taking place in the world of politics right now. It seems as though politicians, as civil servants, are benefiting far too much from the wrong kind of people or in the wrong kinds of ways. The political role is no longer seen or felt by most of us as the role of a public servant to the people, but rather as secret ambassadors to large corporations, greed, and the industrial-military complex.

The global outrage against this seems evident in both the surge of terrorist/fundamentalist ideology pointed at the western civilized world as well as in the everyday people OF the western world going berserk in public. It’s as though we can’t trust that the public domain is a safe and protected place anymore, and that’s largely to do with the idea that public servants aren’t really public servants anymore. And in a larger sense I wonder if this doesn’t have to do with an even subtler systemic problem…we don’t support the right kinds of public services or public servants nearly enough.

I say this as I’m also, admittedly, contemplating with deep gratitude the show of support I’ve received through my fundraiser thus far. In large part the success of this fundraiser inspires me to help other students of astrology, or other practitioners of other disciplines, find the courage to ask for help and to stay devoted and inspired to their path, even when it’s hard to be on your own.

One thing I have constantly tried to keep in mind as a bottom line of my practice is the idea that, “The work is the best payment. The divine is my most prized possession.” This is a perennial teaching that many religious practitioners, priests, or civil servants have held sacred for millenia. But it only works to the extent that we live in a society that recognizes this role or calling as unique, and does what it can to support those called to these vows.

How hard is it for us to do this when we’ve seen these offices and vows so abused? How hard is it for someone like myself to hold those vows sacred, all the time, while living in a world that offers me (astrologers) no temples or oracle sights other than the ones I (or we) make for ourselves?

How hard is it to find our “calling” but then have to fight to the point of exhaustion to both support it and keep it above board all the time, all at once?

Today my prayer is for the revival, restoration, and healing of all public servants.
​
Prayer: Remind us of who and what we serve, and help restore the integrity of the ancient roles and duties within our communities