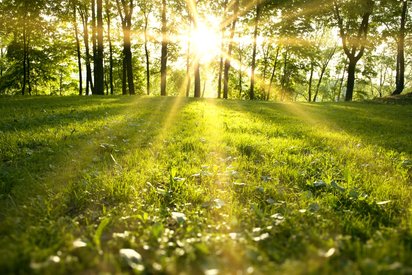 It’s last quarter Moon time, on the even of the Spring Equinox. Let’s check in with the stars!

* As Mercury is gradually emerging into the night sky as the evening star, his appearance signals information, communication, messages, and messengers arriving into the commons. The evening sky is the natural domain of the Moon (ruler of the crowd, the people, and the city). When Mercury emerges from under the beams of the Sun into the evening sky it’s as though a messenger is arriving into a public square, ready to mingle in the masses again, delivering important messages from afar, or from below…watch for this theme in the week ahead.

* Mercury’s arrival into the night sky is accompanied by the Sun crossing over the Spring Equinox point of zero Aries. The Spring Equinox catalyzes, propels, and goads the turn of the zodiacal year for the first time since the zodiacal Winter Solstice. This time of year is defined by it’s fiery, courageous, and brash qualities. It’s a time of accelerated growth, but we should also be careful of impatience, agitation, and division (Aries is the sign of Mars after all!).

* Meanwhile, Jupiter is steadily approaching a square with Pluto in Capricorn, which will excite another activation period for the Jupiter/Uranus/Pluto t-square. It’s likely that near the end of March and beginning of April, we will see another round of significant events appearing on the political stages around the world, as well as in our personal lives. I like to think of each activation window of this t-square as a time where significant destined events are unfolding in our lives, as well as in the world, inviting us to consider our situation very deeply before simply reacting. With Jupiter in the sign of the balance it’s as though each of these destined events represents a kind of “constitutional” crisis for the soul…how we respond or react will likely have far-reaching effects, and if we check in with ourselves we should be able to feel the weightiness of these moments. If we rush past the weight of the moment we’re not as likely to make wise decisions.

* Today the Moon is making aspects to Jupiter and Saturn, which makes it a great day for balancing work and play, duty and discernment, the new and the traditional, the word and the deed. Remember that eventually Jupiter and Saturn will come together in late August, which means that eventually these two planets are going to come together in an act of unity and cooperation. This is a good omen. More on that later!
​
Prayer: Prepare our hearts and minds for the messengers of Spring!