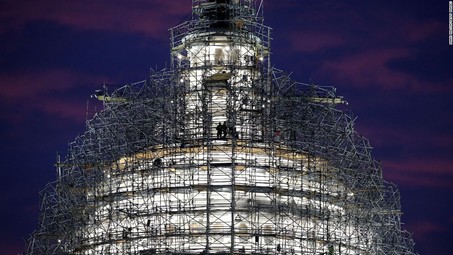 As the Moon is presently engaging the Jupiter/Saturn square from the sign of Virgo, let’s reflect on some of the archetypal dynamics at play within the current political climate of the US Presidential primaries.

Remembering that archetypes like Jupiter and Saturn do not exist or express themselves in a vacuum, remembering the idea that we are frequently polarized by the dynamics between these archetypes when they relate through squares and oppositions in particular, we may observe some of the following important patterns.

* The archetypes of the rich and the poor, or the greedy and the needy, or the too much and too little, are competing right now. It’s important to remember that where there is one, there exists the other.

* Where there is any revolution that perceives things in terms of fundamental polarizations that need to be overturned or flipped forcefully on their heads, such as the 99% and the 1%, there is also the danger or aroma of dogma.

* When assaults from one base of people to another take place, there is frequently an exchange of envy and resentment. When wealthy people see the middle class as a threat to their wealth and power, there builds a sick kind of resentment. On the other hand when poor or middle class people see the upper class ONLY in terms of their greed or wealth, there we find envy.

* Youthful ideals may act as an all too strict impediment to its own substantive future, while old age can immaturely cling to childish things from the past.

* Incrementalism is a form of revolution frequently devoid of the spirit that makes any incremental changes substantive, whereas radical break through style progress may be spirited but lacking in unifying or long lasting effects.

* Mentioning or emphasizing the inter relatedness of these archetypes may stifle the necessity of polarization for the sake of progress or growth. Not mentioning them may increase naive polarization that only deepens pre-existing conditions of polarization.

* The democratic party needs a revolution. No. We need to do away with parties all together. Run as a third candidate.

* The party’s system is rigged, so let’s take it over so it’s in our favor. Whose favor. The people’s favor! Who are the people? Everyone but the establishment, or anyone who doesn’t agree with us. Which party are we talking about here, Democrat or Republican? Both! No way. What’s happening on the Republican side is COMPLETELY different from what’s happening on the Democratic side. No, no it’s not!

I’m being purposefully dramatic and over stating or over simplifying these archetypal dynamics so we can see them at play more clearly. The question from here becomes, “So what do we do about any of this?” And I suppose the answer comes down to whether or not you believe “we” are doing anything in the first place. Is it possible we are simply being lived by archetypal powers? Is it possible these dynamics are simply human caricatures of the currents of the Tao? Or is it our mission to find some synthesis…for some “third” to emerge in Jungian fashion from the fires of these polarities? I certainly don’t have the answer, but my faith tells me to live these questions rather than retreat from them. My faith tells me to be careful not to get suckered by these dynamics…to stay reflective, insightful, engaged, humble, and generous.

Sometimes when I get overwhelmed by all of this on my own personal level (just to disclosed where I’m at personally with all of this–to pretend like I’m not involved would be disingenuous) I zoom out and think of the fact that someday our Sun will die. So what does any of this matter? Other times when I feel disengaged, anesthetized to the reality of suffering and the need for change in myself or the world, like I’ve become a black hole, then I make a list of things I can do, based on the true north of my heart’s compass, and I let that same vision of the Sun, now fully alive at midday, hurl me into some kind of action or constructive response.

I sometimes see this very common, very human, back and forth between idealism and realism, fatalism and radical free will, as a picture of the spiritual middle class. And in my own anger, my own frustration, I see ultra loud forms of spiritual or political idealism that favor one side over the other as a kind of 1% of its own…an elite class of new age loud mouths that stand on the stage with a megaphone while bankrupting the spiritual middle class. If I’m honest then I’m envious of the power of extreme convictions, the sheer confidence of position or voice. I’m personally never THAT sure about anything…and it’s tempting to think that what will give my life its deepest meaning are the certainties I do not yet hold well enough. Of course it would be equally tempting to think that my deepest meaning is found in my uncertainty…but the problem is that I’m not even that certain about my uncertainties. So I find it easiest to simply continue living with the way that I am…suspicious of extremes…which start for me in the tone of voices I hear and see around me.

I say all of this not to suggest others should be the same way as myself, but rather to openly admit where I am as a person who is also being lived by these archetypal powers…or as someone who has some participation along with them.
​
Prayer: What sacred third will emerge from the tension of these polarities? Let us live to see the day, present now, present then, present ever again.