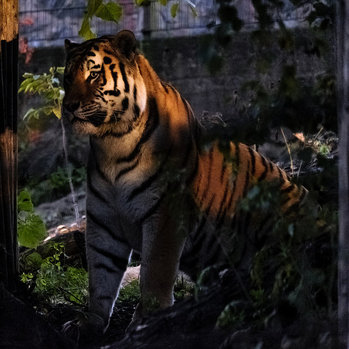 The Moon is in Pisces this morning, applying to square Saturn in Sagittarius before conjoining Neptune in Pisces later today. Meanwhile, Mercury has turned retrograde in Aquarius.

The Moon/Saturn theme of this morning’s astrology may create the feeling that something has reached its expiration date. Something is exhausted or tired. Something won’t budge or move any further. Something we were on top of is now overwhelming us. With the Pisces/Sagittarius square sometimes its about certain limits being reached in our quest for truth or higher knowledge. On the other hand, sometimes the Moon/Saturn square can reflect within us a simple mood of seriousness as well as the yearning for adventure or freedom from the “known.” The Moon in Pisces often brings a veiled quality..things aren’t quite as they seem or we find ourselves easily deluded or persuaded. It’s also easy for our moods to isolate us from others, or for our soul to crave the wide open places of loneliness, slowness, and introspection. We might also find ourselves on the outside of something…listening to the voice of the world’s reasons or concerns and yet strangely distant, aloof, or ambivalent.

As Mercury has just gone retrograde in the sign of Aquarius, we might take a deeper look at this idea of ambivalence, which is like the misunderstood cousin of Mercury retrograde’s popular daughter, “introspection.”

The word ambivalence means “both; strong,” and it carries associative resonance with words like “ambient,” (both, encircling), and ambiguous (both meaning, around both, and wandering). During Mercury retrogrades we often say that it’s a good idea to “go inward” or to “quiet the mind,” or “revise our thinking.” The problem is that using this kind of language about Mercury’s retrograde period is like the loud mouth captain of the football team trying to teach a group of young English majors how to read Shakespeare.

What Mercury retrogrades actually create isn’t about an “internal place” versus an “external place.” Mercury retrogrades aren’t about introversion versus extroversion, and they aren’t about rehashing old thoughts in order to repair or improve them. More frequently they are about ambivalence…the circling round and round that creates an ambient light within the mind’s eye, the both/and wandering that is absolutely necessary for the foolish stumbling upon hidden objects and sexual magic.

To be clear, we’re not talking about the “I don’t care” of cruel indifference or intolerance. Not the “I don’t care” of hipster ego or intellectual condescension or the post modern Buddha bar with its atheistic pride. We’re talking about the “I don’t care” that watches all things stuck in their sunlight. Just as Mercury is changing positions from evening star to morning star, it is swallowed by the Sun. Mercury’s normal position as the messenger between worlds, symbolized by its early morning and early evening positions (both ambient times of day), is becoming clarified exactly because its normal ambi-valence is fading. This is why some people get incredibly possessed and impulsive about ideas and thoughts during Mercury retrogrades (because Mercury is getting swallowed by the Sun’s singular agenda), and astrologers will suggest you “turn inward and wait it out.” But again, this misses something. It’s sort of like saying, “Just wait until the bully is done pummeling you and then you can return to normal. Maybe you’ll learn a few things while he beats you up, too!” At a deeper level, it’s not about waiting anything out or taking something in. That would be to read Mercury in TERMS of the singular Sun. When we view it in reverse, then it becomes about reading the Sun in terms of Mercury…a clarity and centrality given to the bothness, to the wandering without purpose, and the strength of ambient light.

For example, take the calling of a therapist, healer, or counselor. Someone who listens to and bears witness to the lives of others. Of course on one level we could talk about the alleviation of pain and suffering, the “healing work,” and the compassionate heart and so on, but on another level, perhaps even more importantly, there is an ambient light in the eyes of the therapist that can only be seen or felt, validated even, by a constant stream of encounters with people who are stuck, or who appear to be stuck, in their own lights. The eye of the mercurial therapist isn’t an “objective” eye but rather a both/and eye, an encircling eye, like the watchful gaze of a twilight tiger, powerful because unimpressed, alert but not hungry, predatory but not stalking. The power of life for both the animals of the jungle and the tiger alike is given to this watching and watched dynamic…the sensuality of an “I could but I don’t care” that ripples through our most lush environments.

Therapist or not, this twilight tiger exists within each of us, and too often we mistake his ambivalence for cruelty or his ambiance for shame. We try to make of his quiet power a theology and we place blank faced buddha heads on top of our underwear drawers, right in front of our lamp-lit vanity mirrors. What are we reaching for? It’s not just serenity or peace. It’s not just a good price at whole foods and your own bag to take it home with. It’s also about irrelevance. It’s about the sensual quality of irrelevance, that draws ideas out of their most concentrated light and into the shades of mercurial wandering. That dimming of light that soothes us, and the tiger’s tail moving once again…back and forth, “I don’t care. I don’t care. I could, but I still don’t care.”

So let’s not just revise, revision, or rethink our thoughts right now. Let’s not just “go within,” or whatever other Mercury instructions are being given to us by the captains of our new age football teams. Instead lets see if we can catch ourselves caught in our lights, others caught in theirs…then by moving on through the shadows, return to that rippling tension, that quiet muscular power of our deepest ambivalence.

Prayer: Tyger! Tyger! burning bright
In the forests of the night,
What immortal hand or eye
Could frame thy fearful symmetry?
(William Blake)


Image by courtesy of Ignacio at creative commons image licensing