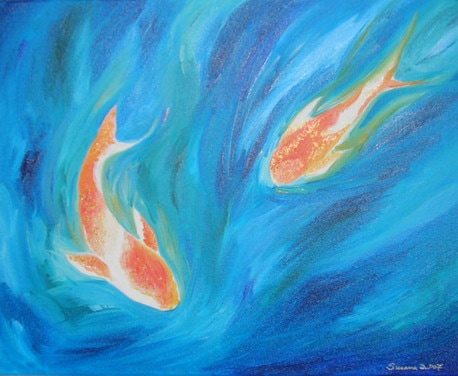 The Sun has entered Pisces!! Hooray for the fishes!!

Stereotypes about Pisces, where they come from, why they aren’t the full story:

Where they come from…

* Pisces is a double-bodied sign that comprises the shift from zodiacal winter to spring. Within the body of this celestial mansion we therefore have elements of both winter and spring combined.
​
* During the winter months, when death reigns, the imagination thrives. The decay and breakdown of the literal life of the literal/physical world opens up the realms of metaphor, myth, and psyche. Pisces is therefore deeply informed by the loss of literal life and light and the opening of imaginal life and light.

* During the spring months, when life is on the rise again, the imagination is projected outward and takes on the many tangible and “literal” forms of the world…the blossoming flowers, the fresh smells, the incoming rains, the first green stirrings. This “real” world isn’t any different from its imaginal counterpart, but they are experienced in consciousness very differently, and often we confuse or mistake the two realms as opposed to one another when they are really flowing in and out of each other constantly.

* As a feminine water sign, comprised of the inner and outer, the imaginal and the literal, winter and spring, ever on the threshold of the two, Pisces and the fishes calls winter and spring into the heart and mind until their cup runs over and pours itself into the world…a stream of thoughts, words, feelings, and actions cloaked in words like atmosphere, nuance, mood, and fantasy.
Why the stereotypes aren’t the full story:
* Any sign might indicate a kind of intuition or a kind of psychic ability…Pisces gets called the “psychic” because the signs borders on the cusp between the literalness of spring and the imaginative depths of winter.

* Pisces is a dreamer. Again, by understanding the qualities above, we might go further than to say that Piscean people don’t have their feet on the ground. What we mean by the word “dreamer” is more like someone who senses very acutely that the imaginal and the literal are two sides of the same coin.

* Pisces is a whiner/complainer/victim. A Piscean person who experiences the dichotomy of the imaginative and literal as a painful or polarizing force, may indeed find themselves constantly torn up inside with good reason to complain about one realm or the other: “This world is so mundane and disappointing,” on the one hand, or “I can’t seem to get grounded,” on the other. If the fluidity between these realms isn’t explored and opened up, one can easily feel victimized. But at the same time, by recognizing the inherent tension and suffering generated between these two realms, Pisceans easily identify real victims and people in need of real compassion.

* The rest of the stereotypes I listed above only tell part of the story for the same basic reasons, involving the same basic seasonal tensions of the zodiac. The more we glorify Pisces with words like psychic, dreamer, Jesus, saint, etc, the more we lose sight of the stone pool containing the two fish. On the other hand, the more we accuse Pisces of being a wet blanket, a whiner, or an ungrounded victim, the more we forget that we are looking at these two fish through an endless fountain of water. For these strange reasons, the sign of Pisces tends to suffer our descriptions as much as it is constantly redeeming itself from them.