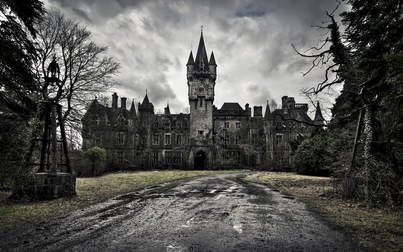 The Sun has entered Scorpio this week, and ruling planet Mars is in its exile in Libra.

* The Sun in Scorpio represents the most solid and stable time of solar descent in the zodiacal year.

* Each day takes us deeper and deeper into darkness.

* Darkness is materiality, the unconscious, and also the soul, which can only be found when we see beyond material, sunshine appearances and into the depths, into the invisible.

* Scorpio is the feminine home of Mars.

* Mars and Scorpio is the critical awareness of darkness, the guardian that protects and guards against the darkness that lurks.

* Mars and Scorpio penetrates into the darkness, diving deep, hiding, secretive, fierce, protective, and possibly denying or holding to the death.

* Now, imagine, Mars in the sign of Libra, hosting the Sun while traveling in the airy and lofty masculine abode of Venus. A diplomat with a dark agenda. A smooth talker with hidden disease. A sophisticated warrior, driving out falseness one intelligent exchange after another.

* Now, imagine, an old Jupiter in Scorpio, being swallowed by the Sun. The picture of pride and denial, finally dying. The image of a puffed up persona, finally facing the truth. The downfall and darkness of the one in power. Or, the moment of inner vision, of seeing the soul, of the last breath and rush of colors, of the eternal visible through last closed eyes.

* When we know a sign and its ruling planet and its gender (which we can really think of as yin or yang) deeply, then we can read the relationship between the Sun in a sign and its host in another sign. So frequently we jump to the straight read of a planet in a sign without taking the time to articulate what it might mean for a planet to be traveling in one sign while it’s host is in another.

Think for example of this analogy. You’re in a dark and mysterious castle. You’re wandering around looking at all the dark relics and puzzling onyx statues. This is Scorpio, the feminine home of Mars, goddess of war. Her home is draped in the colors of mid Autumn and the pinnacle of her castle is the icy image of the winter solstice.

Now, imagine that anything you want to do in the dark castle has to be executed by Mars while Mars is in the airy Venusian sky castle, which is filled with diplomats, laughter, fine crystal, and carefully coordinated colors. It might seem bizarre, but this is close to how we have to read the presence of the Sun in Scorpio right now. The Sun in Scorpio is being toned by the fact that it’s host is in its exile in Libra.

Play with those images and see what you find. My apologies that today’s horoscope is so late. I’m battling a cold again!
​
Prayer: Teach us to see the temples of the stars. Teach us to feel free, here in eternity.