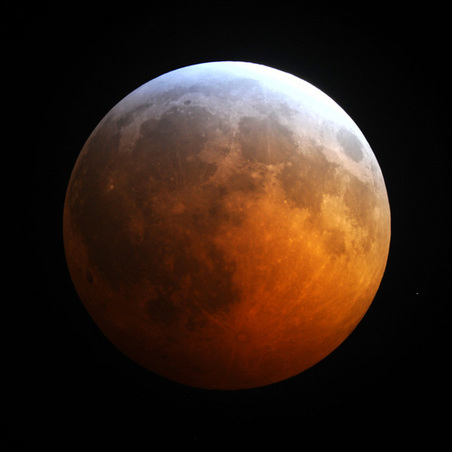 Happy Full Moon everyone! Today’s full moon is a so-called “super moon” and lunar eclipse, all at once. Apparently this combination hasn’t occurred since 1982 and will not occur again until the 2030’s.

Astrologically it may or may not mean anything. For thousands of years there have been two kinds of astrologers. Those that believe the planets are literally causing things to happen, and those that believe the planets are merely divinatory signs or omens. So whether the full moon’s proximity to the earth is creating some additionally strong effect really depends on what position you take with regard to planetary influence, or whether or not you grant any additional symbolic power to the proximity of the moon to the earth at this time.

That being said, let’s talk about the symbolism of this eclipse. This particular eclipse falls across the Libra/Aries axis, with the nodes of the Moon at the zero Aries/Libra marks. The significance of these degrees is of course related to the Spring and Fall equinox points. These two degrees mark the entrance of the Sun into its half way moments between Winter and Summer, or Summer and Winter. These two degrees mark the beginning of Spring and Fall, and both degrees are related to a powerful momentum shift in the solar year. To have the nodes of the Moon at these particular degrees for our eclipse, and within days of our fall equinox, is a strong symbol.

The sky is so full of powerful symbols though, isn’t it? Everyday a new karmic tsunami is being announced by someone somewhere. It sometimes feels like astrology is nothing more than a drone of over promised planetary phenomenon that’s constantly under delivering.

The way I’ve learned to avoid feeling numb to the power of the planets and their significations is to find deeper satisfaction in the smaller or subtler of their symbolic appearances. For example, as this eclipse happens tonight I’m finishing a number of projects that have been in the works for a long time. In the past weak a burst of energy and clarity came to me and I was able to finally finish some things that I’ve been pondering for a long time now. And while I’m ready for big planetary fireworks in the next few days as the eclipse passes through, I’m also prepared for the culmination of these smaller projects to be the most potent symbols of my own eclipse experience. These projects, though small, represent the culmination of a lot of inner work, and recognizing this is its own “big” reward.

So let’s start here. With the sign of the scales featured so strongly at this time, can we take notice of a simple, eloquent, and perhaps understated sense of completion, leveling, balancing, or completing that’s been taking place? Can we notice that small sense of rightness, fairness, or cosmic justice that is part of even the smallest things that have been wrapping up, transforming, ripening, or completing this week?

If we can recognize the fullness appearing on these subtler levels then our astrological palette will become more sensitive, and in time we won’t need to think about planetary transformation in such overly dramatic and simultaneously underwhelming ways.

To close, let’s look at some themes related to tonight’s eclipse (but don’t be afraid to search for them in the small things first):

* A revised, changing, or refreshing of morals, values, and ethical principles

* A change in our understanding, our maturity, and the practice of our values

* Implementing a new form of organization, or new values, practices, or procedures within an organization

* Purification versus self righteous masochism

* The simple recognition that something is over, an era or theme or relationship or person or place

* The renewal or inspiration of our faith in someone or something

* Learning to be likable and assertive at once

The nodes of the Moon after this eclipse will finally be leaving Libra and Aries and moving into Virgo and Pisces. With the north node and Jupiter moving together for a year it should be a very special year ahead. With Jupiter in his detriment, it’s a year where growth and blessings will come through a tedious process of purification, simplification, wholesomeness, and refined ethical approach. It’s a year where small will become the new big, and the dutiful chopping of wood and carrying of water will yield the most important results.

So enjoy the fullness and completion of this moment. Go out and look at the moon tonight if you can, but let’s be careful not to get involved with too much hype and drama about this moment. Life is dramatic enough without adding too many super sized phrases to a beautiful celestial event.