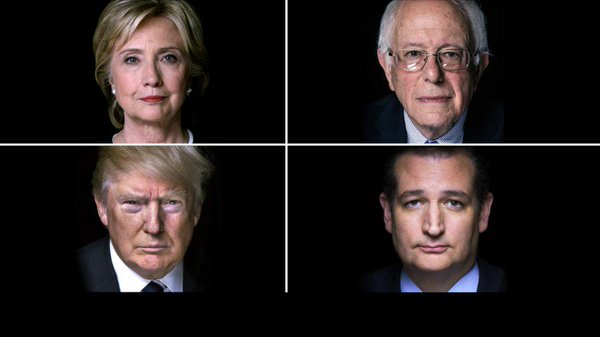 Mercury is moving into a trine with Jupiter today, as he moves toward his station by the end of this month. Today let’s look at what this might mean for us, using the upcoming presidential primaries and the various candidates speaking styles as an astrological meditation.

As Mercury is now strongly in his position as the evening star, moving toward an exact trine (with reception) to Jupiter in Virgo, we are likely to see strong messages, messengers, or voices taking hold and rally forces to find success. At the same time, the relatively weak power of Jupiter in Virgo (retrograde and in an earth sign not as conducive to Jupiter’s nature) may curb the overall effect of this transit or may put somewhat of a damper on the enthusiasm or growth potential of whatever excitement or growth the transit is indicating. For example, Bernie Sanders had a massively successful rally in New York City last night and will likely have another victory tonight in the democratic debate, and yet Jupiter in Virgo may not be enough to topple Hillary’s lead in the polls. Interestingly, Mercury is moving toward his station at the very end of this month, when another large amount of primary states vote. At that time, Mercury will begin to fall back into the beams of the Sun and a kind of weakening of the same momentum that is growing right now may occur. As someone who will be voting at the end of the month I will be interested to see what the overall climate is like at the polls.

In a recent article (read here), Demetra George, one of my astrological heroines, mentioned that Sanders was born just at the time that Mercury was emerging from under the beams of the Sun, as the evening Star. Interestingly, his popularity and string of landslide victories have all occurred since Mercury conjoined with the Sun and then started moving out from under the beams of the Sun (roughly in the days following his wins in Utah and Idaho). Demetra argued that the power of Sanders’ message is in line with the symbolism of Mercury emerging from under the rays of the Sun. He is a kind of champion and fighter, and his message of “overcoming” or “rising up and gaining momentum” is reflected by Mercury’s placement at the hour of his birth.

This being said, we might speculate that his message is potentially reaching a climax or a peak moment by the end of this month when Mercury will begin to fall backward into the Sun. With a few more big wins or losses happening in the upcoming weeks it’s likely that the race will either be fundamentally changing in his favor or finally falling out of his reach, despite the enormous rallying he’s done in the past month. At the very least it bodes well for him that Mercury is making a trine with Jupiter from its evening star position (reflecting his natal Mercury) on the eve of an important debate.

​On the other hand, Hillary’s Mercury (as Demetra also mentioned in her recent article) was vanishing into the Sun at the time of her birth. Archetypally, Demetra links this to Mercury’s mythic role as the psychopomp or the guide of the souls into the underworld. Yesterday I happened to read an article about Hillary’s subtler and more subdued or strategic
communication qualities that felt like an accurate (and fair) assessment of her communication style and the strength and weakness of her approach compared to Sanders. Demetra points to the fact that a Mercury like Hillary’s (vanishing into the Sun) isn’t as outwardly forceful or powerful with its voice or message. The vanishing Mercury may point to weakness of voice, the need for help from others, behind the scenes tactics, subtlety, strategy, or even invisibility. Of course these statements about Hillary’s style draw the scorn of Sanders supporters, who essentially call her dishonest, while the forceful qualities of Sanders’ message are seen as divisive, or idealistic, or even self righteous by Clinton supporters.

Think about it. Sanders supporters see Clinton’s message as sneaky, dubious, lying, and two faced, while Clinton supporters see Sanders as idealistic, self righteous, and impractical. These are the exaggerated images of two very different Mercury’s (one emerging from the beams, the other vanishing into them).

Regardless of what side my readers my stand on (please do not use this thread for a debate–I will delete your posts if it turns into that) my feeling is that today’s Mercury trine Jupiter along with Mercury moving toward its station point at the time of the big primaries at the end of this month all signal a shift in the way messages are being communicated within these primaries…on both sides in fact!

Turning to the Republican side, Demetra points out that Trump similarly has an emergent Mercury in his chart. His message, like Sanders, is also forceful, exciting, and charismatic (albeit in a completely different way, and not one this author is at all impressed by compared to Sanders), and yet as Mercury reaches its peak it seems that his style or his momentum, or both, are also changing. Cruz, on the other hand, has a Mercury that is similar to Hillary’s, insofar as it is a Mercury that is vanishing into the Sun. This would point to the same kind of rhetorical weakness in comparison to Trump that Hillary has in comparison to Sanders (Demetra pointed this out in her article as well). And yet, we’re at a point in the process where Trump’s charismatic style might be reaching a natural peak or turning point. The stationing and retrograde of Mercury may start to favor Cruz’ subtler, more strategic, or perhaps secretive/manipulative or deceptive Mercury. This is evidenced by the fact that Trump has been complaining that the game is rigged simply because Cruz’ campaign has been working the ins and outs of the election game more intelligently (or some would say deceptively or dishonestly–the game is rigged!).
Again–no debates please! I will delete inflammatory comments.

Now, let’s try to bring this down to the personal level. What can we each learn or take away from this when it comes to our own personal experiences in the upcoming month or so?

Here are a few things to consider:

* One, a more forceful, outward, communication or organizational style might be helping you gain ground or move forward with something right now. In fact today you might find even more positive force or momentum building for you–whether that means good news, progress on a project, the integration of something you’re studying, or the successful organization or implementation of your ideals, wishes, hopes, or dreams…enjoy the ride!

* Two, while the momentum is building or you are gaining ground, expect a kind of peak or natural climax of some kind around the end of the Month, at which point a period of implementation or natural dissipation might follow

* Three, don’t push something (an idea, a project, a line of reasoning, a style of communication, a product, a goal) past its natural limit. When you feel something is starting to slow down or lose momentum, or its becoming ineffective, rather than giving up, complaining, throwing your hands up, or continuing to push as hard as you can, consider the idea that a new approach is called for or that a new style will work better…perhaps progress isn’t being halted but rather a new strategy is going to work better for you moving forward

*Finally, remember that yes and no, momentum and loss of momentum, victories and losses, are all related to each other…the effectiveness of something today is a strategy for loss tomorrow…adaptability within a Mercury phase change almost always leads to a deepening of our wisdom and spiritual intelligence. Remember that ground gained on the spiritual plane is never ground lost. Sometimes what appears like a setback or defeat is actually just the first stage of a larger process. One of my friends,Trina Lacey Flores, in line with this idea posted an article yesterday about the way in which Occupy Wall Street was called a “failure” by many people and yet it’s values and “voice” (Mercury) are clearly a driving force behind the amazing rallying cry of the Sanders campaign right now, which in turn has the power to reshape the democratic party for a long time to come. So even if we face setbacks this month in the midst of big surges of success, in the long game that progress counts toward our vision and if we don’t bank on that then we’re not remaining faithful to the message.

​Prayer: Teach us to hear the voice of Mercury as he touches Jupiter today. Help us to study and learn from the wisdom of his changing phase in the weeks ahead.