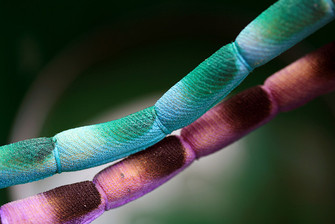 Today the Moon has entered the sign of Cancer and is making trines this morning to Venus and Neptune in Pisces and then by later tonight will be triggering the Pluto/Uranus square and the nodal axis of the Moon.

First, whenever the Moon enters a cardinal sign (for the past few years in fact), the Pluto/Uranus square is getting stimulated, which at this moment in time also involves the nodal axis of the Moon. This means that on these days we are usually getting the volume turned up in whatever areas of our lives we’re most ready for change, death, invention, and rapid evolution. Evolution doesn’t need to be “toward” some literal goal or metaphysical ideal. Evolution is its own reward. The mutating novelty of who we become when we change, including all the strange new questions and shadows, is exactly what the soul craves. A new space and a new angle from which to perceive and relate to ourselves and the world. A new world itself even. So it’s not just “WHAT I’VE BECOME” in some heroic sense. No. Because whatever we’ve become the point is still to relate with it, to perceive with and through it, rather than getting stuck into a literal identification with it. It’s through this continual relating that the mutation, death, and invention continues.

Whenever the Cancer moon triggers the Uranus/Pluto square the transformation reaches down into our past. It touches the roots, the home, and the family. It brings up anything from our childhood to our children or marriages, to our mothers and fathers or brothers and sisters. It brings up a kind of nostalgia for things left behind, for the places that have nurtured or protected us, or for the places we feel most safe. As the Cancer Moon highlights these things it simultaneously poses the question to Pluto in Capricorn, “Can you help me eliminate something from my life that is keeping me from the warmth that I crave? What work do I need to do, what hard sacrifices do I need to make, in order to have more warmth, safety, and nourishment in my life? Give me the brutal truth. Show me the hard reality of it.”

At the same time, Uranus in Aries can give us the impetus, the sudden action, the courage, and the immediacy, to forge ahead and liberate ourselves from whatever is keeping us from the deeper nourishment we need. Pluto might show us how deep the shit goes, and what kind of death is required, but Uranus in Aries can give us the courage and the inventiveness to approach the process of death with excitement and creativity. So we’re not just purging..we’re also breaking new ground.

With the north node in Libra, all of this can also mean new relationships. Sometimes none of these changes are possible without forging new relationships, or without some kind of important collaboration with others. The question might be about how to implement all these changes peacefully. How can transitions be made diplomatically or in collaboration with others? It’s safe to say that big changes won’t always work for everyone around us, but that doesn’t mean they shouldn’t happen, and it doesn’t mean compromise isn’t possible.

A different angle might be about the difficulty that people (including ourselves) have in accepting or receiving help right now. Do we tend to perceive help, advice, or diplomacy as an insult or trespass? Should we lighten up a little and try to listen to what someone is offering us? Are we on the defensive too quickly about something?

Last but not least, sometimes when the Moon enters the cardinal signs and triggers the Uranus/Pluto square we’re also getting a very clear and obvious forecast about what changes are imminent. They may not happen today, but we should be able to see what unavoidable “stuff” is coming…for good or bad!

Prayer: What brave changes can I make so that I feel safer and more at home in this life? What needs to go and how can it be done gracefully?

Image by courtesy of woodleywonderworks, at creative commons image licensing