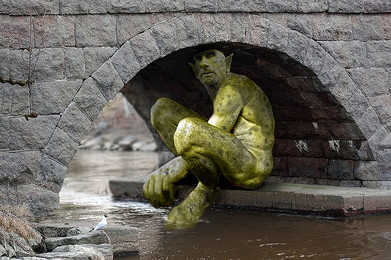 The Moon is in Taurus today, applying to sextile Mars in Pisces and then trine Pluto in Capricorn while also squaring Mercury retrograde (who is sextiling Uranus in Aries).

After having to block/ban someone from my horoscope list for incessant “trolling” over the past several months, I got curious about the history of trolls. The names we give to people we don’t like are often filled with a unique history and deeper meaning. Even though I won’t be unblocking this woman, because sometimes you just need to set your boundaries with people and stick to them, I’ve noticed that this theme of “Trolls” and “Trolling” has a unique relationship to the current astrology. So to start, here’s a few fun facts, hints, and riddles about Trolls:

* The word “Troll” has a connection to the root word “Thurs,” which is part of our “Thursday,” or “Thor’s day” (the day of the week given to Jupiter). The connection is thought to be part of the old Norse belief that Lightning (the presence of Thor and his hammer) scared Trolls away and back into hiding.

* Trolls are famous for invading, devastating, or disrupting public halls, feasts, or farms. There are also stories about trolls hurling stones at churches and also trolls being driven back into hiding by the sound of church bells. Trolls are therefore appropriately labeled as disruptions to our public places of celebration, worship, abundance, and gathering (now the term is used on the internet to describe someone who is incessantly disruptive or destructive to public forums, chats, etc).

* In Norse mythology trolls were banished to a separate world of their own because they were monsters and man-eaters, constantly disruptive, rebellious, and generally in competition or opposition to the general welfare or peace.

* Trolls turn to stone when exposed to sunlight, at which point they are thought to become landmarks for travelers.

* There are many different kinds of trolls, and some apparently were thought to live in burial grounds and have an intimate connection to the dead.

* Trolls also have a non-malicious or disruptive history…in some traditions they were known as the “hidden people,” or the “little people,” and while they weren’t to be disturbed or bothered they could also be quite helpful to humans.

In one story the hidden or little people became hidden specifically because their Christian mother was ashamed of how dirty they were and hid them away from the world, at which point they became the hidden or little ones, who would help keep watch over the charcoal kilns of charcoal burners at night.

In each of these small tidbits of information we can see a little more deeply into the nature of trolls, the troll-human relationship, and the relationship between trolls and our modern use of the word “trolling.”

Trolls are rebels who disrupt the harmony of public places. In this regard trolls fit nicely within our current stellium of Aquarian planets, especially the culmination of Venus in the sign of the rebel. Aquarius embodies the archetypes of the outcast and the iconoclast. Aquarius isn’t afraid to hurl a few stones at our most puffed up places of public worship and dogma. Aquarius isn’t afraid of the banishment they might suffer by acting out, and yet something about their constant ostracization from others seems to be an intimate and all too personal part of their destructive rage and insolence…like within every troll are also the little trolls, the hidden ones who were once upon a time banished because their mother was ashamed of them…”too dirty” for the world.

Perhaps most interesting is the fact that trolls are thought to be scared away by precise lightning strikes. Could this suggest that trolls are perhaps children of the lightning? Like Thor or Jupiter’s secret emissaries, or as Satan is to God in the story of Job…maybe trolls are here specifically to disrupt our complacency (in time becoming landmarks for something sacred that exists within the wildness of nature, the places outside the separating church walls or banquet halls), and yet at the same time their Uranian devilry also answers to and is scared off by the same sudden lightning strikes, which banish and judge them instantly, “back to the ugly hills, back to the lonely mountains, away from this peaceful place, be gone!”

With the Moon in Taurus, the places of our peace are the places of the sacred cows. As a Taurus rising, I pride myself (in all the complexities of Taurean pride) on my horoscope columns being open and peaceful forums, like open pastures. I like my columns to be beautiful, filled with a kind of lush springtime feeling. I like them to be supportive and challenging without compromising the supportive feeling. My wife is a double Taurus and our yoga studio is similar. I just raised a good amount of money through my kickstarter to continue doing this. So you see…isn’t there something quite natural about attracting a few troll attacks when you’re building a cathedral? Isn’t it natural that a few stone hurlers would come out of the forests to keep you honest?

Just yesterday I wrote about questioning the need for balance all the time (an accusation toward the cow and her complacency). I saw the post as quite Uranian or rebellious when I wrote it, but then the troll came along and hurled another stone and I came to recognize that I’m actually quite a cow myself….I might have some provoking things to write, but bugger if I don’t try to keep everything as beautiful and supportive as possible. Bugger if I’m not here building a kind of cathedral or banquet hall out of my work!

Since the troll had been trolling me for a long time, and since my insistence upon peace had kept her hanging around it was the perfect opportunity to recognize the irony in everything that was happening and by doing so I conjured up a lightning bolt of my own. I eliminated her from my list and said “be gone!” The Bull in me was angered, “Why did this person have to be so incessantly destructive? Couldn’t she have made her points without getting so nasty? Couldn’t she have simply participated nicely?”

But then we’d live in a world without trolls…the hidden or little people…the outsiders and outcasts, the divine rebels who smash our dogmatic sanctuaries and leave unforgettable landmarks in our lives, the kind made of stone, the kind that exist outside the city walls, the kind that don’t go away. Trolls give stone to sunlight and lightning to peace.

Interestingly, before any of this happened, yesterday I wrote a Moon Meme that went like this: Lightning through trees heart, bottles the vintage of a devastating thought, and startles the coldness, of our lazy desires.

Hmmm…a memory: when I was a kid my Aquarian moon mother used to give my sister and I those lovable looking, wild-haired troll dolls on Easter morning. She would put them in our Easter baskets before church…