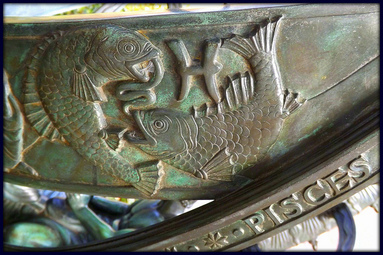 The Moon is void of course in Taurus for the first half of the day and will move into Gemini by this evening. Meanwhile Venus has moved into her exaltation in the sign of Pisces. Let’s take a closer look at the meaning of this placement, as well as what we might expect from Venus in the upcoming weeks.

Let’s start with the constellation image of the two fish. One is pointed upward and eastward, the other downward and westward. One toward matter, body, soul, earth, depth, and death, and the other toward spirit, mind, heaven, ascension, and transcendence. Like the yin and the yang symbols of Taoism, the two fish bring to mind the mystery of the opposites and their eternal movements…”the way that can be named is not the way.”

The Piscean mythos also brings to mind the great mother and her heroic son. In this myth the great mother is thought to represent the primordial home of the soul, the womb, matter, death, and all the chaotic forces of nature and the instinctual body. The great mother is both “mother earth” and also “Kali” or the natural forces of destruction and chaos. From these mother images (and others) the hero son is born, and his task becomes the overcoming, transcending, or separating of himself from the clutches of matter, mother, and death. Sometimes this is imaged as the spiritual aspirant whose devotional practices aim toward liberation from rebirth on the material plane, and other times its about the fast burning star who temporarily blesses humanity with his light and life. Sometimes its the tragic son who exists in a perpetual state of torment because of the possession of his psyche by the irrational forces of the mother…he is the rock star, addict, moody genius, and suicidal temperament..face toward the heavens while being pulled down into the sea. He is the anguished poet, lucid dreamer, mystic, and saint. But wherever he goes, however noble his drive to transcendence, he remains “fish tail tied to the other” (as Liz Greene might say). The saint attracts the brutality of his martyrdom. The sinner attracts the holy light…the numinous crack in the clouds of his despair. The ascetic tortures the body to achieve bliss. The bliss feeds on the bones and washes life out to sea again.

The extent to which this Piscean mythos dominates our imagination is profound. Perhaps it’s because we are supposedly coming out of the Christian-centric, “age of Pisces,” or perhaps it’s because of the impact of the Axial age’s great fishy thinkers (Socrates, the Buddha, Lao Tzu, Heraclitus, etc), but look around and you will see people equating the very definition of what it means to be either spiritual, mystical, OR religious with this Piscean myth and all its drama.

What are the consequences of viewing spirituality through this exclusive lens? The first and most obvious is that it pits the heroism of transcendence, evolution, salvation, or redemption against the instinctual body, the lower self, the ego, or whatever other words we end up using to describe the other fish. Even within our talk about the need to transcend the opposites, marry them together, etc, we’ve already conceived of “the opposites” as both a fundamental “reality,” or a problem to be solved, a synthesis or union to be achieved (which means we’re already in the grip of one of the two fish). Even if we say it’s already here you just have to learn how to see it…we are still in the grip of the Piscean mythos. A fish with its tailed tied to the other…round and round…
Heraclitus (a contemporary of Lao Tzu) once wrote, “Gods live past our meager death. We die past their ceaseless living.” He also wrote, “The soul is undiscovered, though explored forever to a depth beyond report.” The fragmented poetry of the Tao Te Ching, along with zen koans, riddles, and haikus are also wonderful examples of the Piscean paradox. But so too, and perhaps even more powerfully, the past 2,000 years of romantic art, poetry, film, fiction, and fantasy. The more concretely we take the Piscean reality of the opposites and its need for a solution as a religious or metaphysical baseline, the more narrowly we imagine what it means to be either spiritual, mystical, or religious. Not every god cares for or is nearly as obsessed by the all encompassing perception of opposites (nor the resulting ‘way of the tao’) because not every god appears in the image of a fish with its tail bound to the other!

The all consuming nature of the Piscean mythos, in other words, is part of the illusory effect of Pisces. It’s part of the intoxication. Part of the haze and fog. As long as we entertain it we will be drawn into the realms of poetry and paradox or the striving for transcendence from a vicious cycle. Meanwhile the other gods simply see two fish swimming in their mysterious circle, caught in the lights of their circular pool…sometimes its really not more complicated than that: an entire spiritual paradigm, an entire history of several thousand years, like a group of people gathered around a wishing pool, hypnotized by two strange fishing chasing each other’s tails…

I don’t mean to demystify Pisces…as long as we stay near the Piscean wishing pool, everything I’ve just said can swim right back into the circle…and maybe this is why Venus love Pisces so much. Maybe this is why Venus is exalted in Pisces? Because what can be ugly about something that flows ceaselessly beyond itself? What is more alluring than the beauty of the two fish and their wishing pool watchers? Venus here is in the land of mystery and dark beauty. She is awash in the revel and pain of life alike…the allure of the ten thousand things. Of course Aphrodite loves the two fish and the wishing pool. Of course she does. She is the veiled goddess who was born of the sea. The secret lover of malefic Mars, and the iridescent mother of Eros; who became the lover of Psyche (another name for soul).

Many astrologers over time have commented that exaltation can also be a signature of excess, pride, or even idolatry. Though the placement of a planet in the sign of its exaltation is generally thought to greatly enhance the planets ability to “act,” exaltation can also run the risk of inflation. All this being said, here are a few things to watch for over the coming weeks with Venus in Pisces. In the next few days we’ll also look at some important aspects from Venus in Pisces to the other planets (first among them a square to Saturn!).

* An ease or grace in style, expression, communication, and relationship..an other worldly feeling of bliss and mystery

* An appreciation for fragmented poetry or wisdom

* A desire to transcend some cycle, habit, or pattern

* A fugue state…entering into a mediumistic flow

These are just a few to get the imagination turning in circles, like the fish themselves…

Prayer: gathered near the wishing pool, watching the two fish swim their circles…help us to be here without getting lost here.


Image by courtesy of pinehurst, at creative commons image licensing