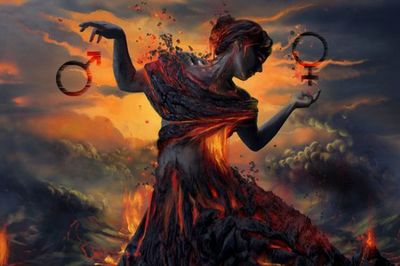 Venus is closing in on an opposition to Mars this week, while Mars is also stationing to turn retrograde by the end of the month. Both Venus and Mars are also closely conjoined the nodes of the Moon right now.

* Meow! I look great, and I see you seeing it, which makes me want you, even though I may not be attracted to you (you might be talking to something inside your refrigerator).

* The allure of fancy, costly, nice, expensive things, orrrrr…the voice of a wandering warrior, reminding you, “A girl has no name!”

* The typical relationship issues you face are exacerbated, reversed, or possibly entertaining or even arousing.

* Stops and starts, push and pull, attraction and repulsion, back and forth.

* When the hunter becomes the hunted.

* The “battle of the sexes.” Stereotypical issues and unfair stereotypes alike.

* I’m sooooo attracted to you that I’m considering destroying something.

* Double standards for men or for women.

* Machismo and being attracted to the wrong things.

* Overly sexualized images of ourselves, hiding something in plain sight.

* The image of a fraternity and sorority competing mindlessly with each other.

* People pushing hot-button topics because of the response it creates, the arousal it stimulates, the fear and desire it unconsciously amplifies

There are, of course, so many other things we could say! 🙂

But what do you “do” with a transit like this? A good idea is to be on the lookout to avoid any of the unhealthy situations that I’ve outlined above, but we should also remember that some events are simply the stuff of destiny…so it’s not always “what we do with a transits” as much as it is, “how do I respond, rather than mindlessly react to the unfolding events of my destiny?”
​
Prayer: Be our true love, be our friend, be the remembrance that all longing begins and ends with the longing for you.