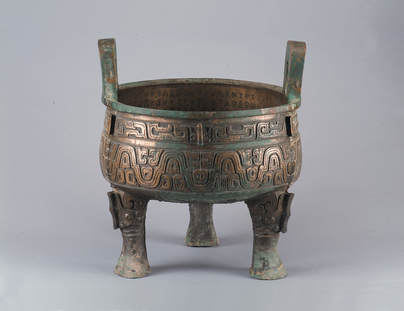 Venus is opposite Neptune.

* The 50th hexagram of the I Ching is sometimes referred to as “Establishing the New,” and it depicts an ancient Chinese sacrificial vessel with two handles and four legs.

* The vessels were called “ding,” and they were made whenever a new dynasty began or a new ruler took the throne. They signified the idea of a new beginning or a new era, dedicated to the virtues of heaven.

* The ding was also sometimes used to fill with food at memorial ceremonies. The food was offered to the Gods as an act of thanksgiving for continuing to make the family “new,” and prosperous.

* As it pertains to Venus opposite Neptune, the hexagram points toward the image of sacrifice and thanksgiving rather than material need or greed. Venus opposite Neptune can easily show up in our lives as the desire for something that we don’t have, or the insatiable longing that drives us into repetitive and self-destructive patterns. Hexagram 50 tells us that right relationship to the Tao involves the recognition that every new season of life, growth, or abundance in life, is given to us from heaven, and so the right relationship to having anything in life is symbolized by the placing of that same abundance into a caldron offered back to the powers that gave it in the first place.

* The ding isn’t an object of fear. We don’t say thank you so that we might continue to gain or in the fear that if we don’t please the higher power that abundance will be taken away. We say thank you when good things come into our lives in order to stay in right relationship with whatever we have and whatever we lose, whatever is gained and whatever is lost. In this way, we think of the divine as the giver of the harvest, the harvest, and the sacrifice. We think of the divine as the destroyer of the harvest and the replenisher. In all things we give thanks.

* Hexagram 50 is also about establishing something new, and in order to establish something new in our lives, we have to empty ourselves out in order to make room for something new. Venus opposite Neptune is sometimes about the necessary experiences of disillusionment that cause us to empty out the old vessels in our lives, to purge, remove, or eliminate that which is no longer working, in order to make room for a newer and more harmonious way of living. This can pertain to lifestyle, relationships, values, money, etc.

* One commentator says, “After King Wen abolished slavery and established a new feudal system, the methods of production changed, latent productive capacity was released, and productivity greatly increased….[he] describes the defective old systems as a sacrificial vessel turned upside down, saying that it was favorable to get rid of the “stale stuff.”

* The fifth line of hexagram 50 talks about the ding having golden handles and golden carrying rings. Numerous commentators have suggested that this line has to do with becoming aware of what motivates or influences us for good or for bad. By becoming completely aware of what we put into ourselves and what comes out of ourselves, we may begin the process of starting a new chapter in our lives, which will generally promote greater harmony within ourselves and with others.

* This morning’s reading shifted hexagram 50 to hexagram 6, which is called “conflict.” Often, the second hexagram makes sense of or focuses the first. In this case, we see the image of the conflict between opposing or different forces with different agendas.

* The truth of Venus/Neptune is that it provides us with an opportunity to start a new time of harmony in our lives but in order to establish a new time of harmony we have to offer something in sacrifice, in the attitude of peaceful Thanksgiving. We also have to become aware of the good and bad influences coming in and out of our minds, our bodies, and our relationships because Venus and Neptune can also amplify our desire for things that are old and toxic or purely selfish (which we will eventually become disillusioned or even harmed by if we don’t take the opportunity to make changes now). When we become aware of the influences in ourselves and in our environment that create conflict, then we can fully listen, fully comprehend, and again, we will establish a new, prosperous and peaceful era.
​
Prayer: Teach us to listen and fully comprehend. Teach us to offer a peaceful and simple sacrifice, to empty the cauldron so that a new era of harmony might be established in our lives.