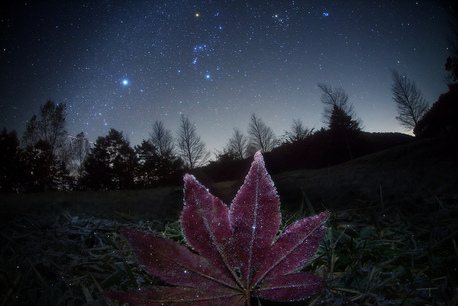 The Moon is in Aries this morning, beginning to gain energy as we head toward the first quarter by the beginning of next week. This morning the Moon will trine Saturn in Sagittarius and then sextile the Sun in Aquarius.

It’s a good day to find support and energy for new ideas or projects. The combined signature of the Sun in Aquarius and the Moon in Aries is about the momentum of awakening ideas or actions, especially ideals that excited or ignite the desire to break new ground, make new discoveries, or forge ahead in the face of our fears. However, as Mercury retrograde opposes Jupiter in Leo, conflicts about ownership or recognition might come up. Whose idea is this? Where did it come from? Is something being unfairly borrowed, appropriated, or even stolen? At the same time, is someone being too possessive? Can we really own an idea or inspiration? It might be wise to keep some of our thoughts and plans to ourselves right now as people may also be prone to quickly taking our excitement and deconstructing it, or dream-killing it. The best ideas often need some time and space to grow before being shared with others, especially people who tend to be incredibly conservative, or jealous and competitive.

At the waxing crescent stage of a Moon cycle (our current stage), the Moon’s light is returning from its darkened “new moon” phase, and we are gradually building toward the first quarter. As the Moon’s light is building we generally go from a period that is relatively “unconscious” toward one that is more “conscious.” I use quotes here because these words aren’t meant to be scientific…it’s good if they remain somewhat vague.

What do we mean by the word “unconscious?” It’s probably a good idea to eliminate some of the cliches. By unconscious we don’t mean “stupid, less evolved, full of shadows and darknesses, blockages, things that need to be purged on the way to the light, things repressed from childhood or the past, past life karma,” or whatever else. All of these ways of thinking about the unconscious are usually being made in the terms and language of the conscious. Once we get over the idea that “consciousness” is better, more evolved, lighter, more unified, more compassionate, more aware, more integrated, more whole, etc, we’ll be able to understand the unconscious in its own language. The unconscious is always relating to what is conscious…its the shades that rest at the edge of our certainty, it’s the black of the eyes that gives contrast to the colors, the unseen mood or thought, the secret history and the poetic double meaning. It’s the freudian slip but not what the freudian slip means or reveals. It’s the dream before and beyond interpretation. It’s the multiplicity of images streaming and the disappearance of each one. It’s the unspoken desire that rests quietly within every selfless action. It’s the poetry of patterns that never change shape. It’s the complication of character and virtues of our vices.

Good to move around these ideas as the Moon is gaining light. Because each month as the Moon gains light, what tends to happen is that specific images or themes rise up from the unconscious and engage us more consciously, more concretely. The images take part in the play of our lives, and as they do so they build in strength and intensity throughout the rest of the cycle, until the last quarter Moon, when their life force dissipates and their gifts or wisdom for our conscious lives is harvested, at which point the darkness takes over again.

So as the Moon is building force into the sign of Aries, and our Sun is in Aquarius, we might start to notice the appearance of certain ground breaking actions and powerful ideals gaining strength within us. Watch as they develop over the next two days…when the first quarter Moon comes early next week these new thoughts and images will propel us into more specific actions.

prayer: mind over fire, catches breeze, catches love
like the deep slumbering
of an early arousal
and frost light
on armored thoughts

Image by courtesy of Masahiro, at creative commons image licensing