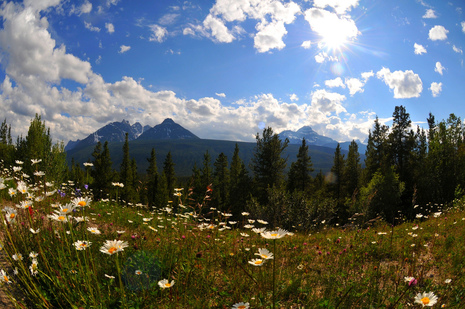 First we have to understand the difference between the Sun and Saturn. Whereas the Sun is life giving, moderate, and warming, Saturn is dry, cold, and degenerative or life depleting. Whereas the Sun represents growth, Saturn decay, whereas the Sun represents the fullness of youth or adulthood, Saturn is more like old age. In these very general ways, the Sun and Saturn are averse to one another. This is why, for example, Saturn is in his detriment in the Sun’s home sign of Leo, and the Sun is in his detriment in Aquarius, the home sign of Saturn.

At this point usually a few questions show up. So what do we mean when we say the Sun is depressed in Libra or that the Sun does better in Aries? Isn’t it offensive to say that all Librans are depressed or somehow worse off than all Aries people? Of course! Of course it would be offensive to say something like this, but that’s not how and why the dignities were used. One of the reasons we take such offense to the idea of a planet being more or less empowered by the sign its in is because we now see the planets as a map of the personal psyche. So each planet becomes representative of some “part” of a person’s identity. And so of course..who wants any part of their identity to be described with a word like “depression” or “fall?”

Insofar as our astrology is primary an activity of psychologizing, the dignities will not be very pleasant to our ego centered ears.

But to understand the traditional use of the dignities we have to let go of seeing astrology as fundamentally psychological and personally or behaviorally descriptive. We don’t have to lose the personal and psychological, but we have to go beyond this being the primary medium of the symbolic language if we want to understand the way these ancient designations were used.

Just like the picture of the cosmos at birth reflects a vast array of stars and planets, our lives are similarly diverse. They are about so much more than just our inner/personal and psychological reality. So how do we go about predicting and describing who, what, where, when, and why these others areas will go? The language of dignities and debilities helps us to do this by helping us to assess the relative strength or weakness of the symbols/planets that stand in as representatives of multiple different realities we will encounter in our lives. So a Sun in fall in Libra, in say the difficult 12th house, with the Sun ruling the 10th, might indicate someone working in hospitals where people are dying or ill. In this made up example, both the loss of light symbolized by the Sun at the Autumn Equinox (Libra) and the difficult themes of the twelfth house (illness, hospitals, etc) combine to give a specific picture of the subjective/human reality of a person’s career. This has nothing to do with whether or not someone will find spiritual meaning or deep substantive value from doing this work; in this example the planetary power is merely part of describing the subjective/human reality of this person’s career.

So the planetary powers do not reflect “good and bad” things in some ultimate sense but rather in the very everyday, human sense that we all live with…they reflect the kind of everyday circumstances that are an inevitable part of life in this realm…a realm saturated with pain and suffering, along with joy and bliss. To toss out these qualifying powers of the astrological language, or the assessment of planetary strength, simply because we think we are beyond these categories or that they are personally offensive is silly. We shouldn’t take any of this so personally to begin with. In fact, one might say that it’s only by getting a precise picture of the subjective human reality outside of our personal ego, as shown by the many different factors in a birth chart, that we are able to see beyond its limitations. It’s limitations are the very same gateway by means of which our consciousness may come to see itself reflected in something outside of time. That this is happening while simultaneously within our bodies, limited and yet defined by our time based fate/destiny, means that there is a sanctifying power at work in all of this. “It is good” no matter what, we might say, and therefore again we shouldn’t take the planetary dignities too personally in the first place.

A second objection that usually comes up has to do with the seasonal differences in different parts of the world. Wouldn’t the Sun in Libra be exalted in the southern hemisphere since it’s springtime for those people? It’s a totally fair question. Here’s the simplest answer I’ve come across. The system’s orientation comes from the northern hemisphere, so as a universal/symbolic system accessible to anyone the orientation remains in the north. When you are born an Aries in the southern hemisphere you are still born in the Spring season of the western/tropical zodiac. This doesn’t mean it was spring where you live, it means it was spring with regard to the zodiacal system you are using to analyze your life, character, fate, fortune, destiny, etc. Second to this we should remember that the way psychology and character was assessed in ancient astrology wasn’t the same as it is today. We primarily identify with our Sun sign, but long ago astrologers might have paid more attention to the temperament signatures in your birth chart, or the planetary ruler of the hour maker (ascendant).

So last but not least, what does it mean that the Sun is currently exalted in Aries? Well in the most general sense it means that solar oriented themes: growth, clarity, wisdom, leadership, insight, heroism, ambition, etc, are strongly emphasized and in good power. In the most general sense you might say that it’s a good time to move forward, to achieve or pursue ambitions, to grow something, or to understand or gain clarity. However, the Sun can stand in to represent a huge variety of different things in particular. The Sun might reflect a person in your life, a place, an unfolding event or series of events, or an inner psychological reality. The exaltation status means that these particulars might have more power or strength right now, and that can look and feel different for different people. Our work as students of these living symbols is to learn how to see them at work in the daily motions and changes of our lives. The more we see these planetary threads the more the timeless starts to seep through the veil of time.
​
Prayer: The Sun is exalted. May we feel and see the meaning of this phrase, and then beyond its meanings here, to our ever present home in the lights of eternity.