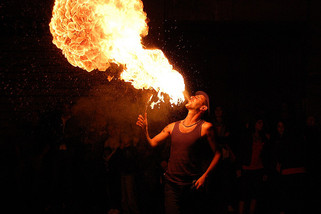 The Moon is in Sagittarius this morning and applying to create a grand fire trine today, first by its trine to Uranus in Aries, and then to Jupiter in Leo. Let’s take a closer look.

First of all, a grand fire trine is a complex aspect configuration of three or more planets occupying all three signs of the same element (in this case the fire signs: Aries, Leo, and Sagittarius) approximately 120 degrees apart from one planet to the next. The overall picture when you connect the planetary dots looks like a large triangle.

Maybe the most noticeable pattern with a grand trine of any kind is the elemental emphasis. When so many planets are transiting the signs of the same element, we’ll find ourselves consumed by the expression of that particular element. With a grand water trine we might find ourselves consumed with emotion, memory, and psychological complexity, like a large family gathering after a funeral (the watery quality might be overwhelming). With a grand earth trine the image of moving our homes from one house or apartment to another (boxes, details, chores, shopping, lifting, organizing, rearranging, bills, etc). With a grand air trine, the image of the last week of University: tests, exams, papers, long conversations, emails, ideas, all swirling intensity. So with a grand fire trine the same kind of overwhelm is in the air today, expressing itself through the language of fire: intensity, action, ego, spirit, animation, excitement, passion, heat, temper, and irritation.

Since the Moon moves quickly the grand fire trine won’t last long, a matter of one day or even just this afternoon, but if we watch for it then we might just glimpse some fire sprouting out of thin air!

Fire comes first. We know this because all of our fiery creation stories tell us. Whether it’s the big bang or the bible, life begins with an explosion of life and light, heat and scream. Fire comes first. It explodes outward before thoughts and ideas are fully formed into words. In fact words seem to form around fire; the impulse itself descending like a spirit from above. Even the dove as a messenger of peace descends from above: “The word becomes flesh.” In our lives we might experience this as the sudden burst of inspiration, the foot in mouth comment, the burst of energy, the sudden rage or irritation, as well as the break in the clouds, the volley of intentioned arrows towards the target, and the passionate conviction that seems to both simplify and intensify our thoughts (the touch of the fingers to the temples, the closed eyes before the sudden heroic burst of flame from the pupils). Fire comes first.

Fire is the fantasy of the goal. All spiritual ideation is primarily based in fire and fire in goals. When a grand fire trine sweeps through we are consumed by tongues of fire who speak their goals to us. The goals of fire are generally twofold: to become more of itself (to spread and grow stronger, bigger, more intensified and far reaching), thus enhancing its primacy, and to consume as it clings (thus preserving its primacy). For fire to grow it needs more material to feed on: air, wood, etc. If we don’t have arenas of our life set up to hold and feed the fires, then when it comes rushing through it will consume whatever is around us. If all we’ve got is twinkies in the drawer, then the sudden burst of passionate hunger will eat the twinkies, saying “this above all is what I need right now.” Because fire consumes the ten thousand things for the sake of itself, it won’t discriminate. We should therefore be careful that we always have offerings set for the fire. For some people it’s writing, reading, art and culture, for others its sex, exercise, live music and large crowds. When fire comes through if we don’t have something to feed it, if we don’t have somewhere to go, we can easily become consumed. Fiery possession is so often that ego-hungry ghost that blazes through and trashes the place. Afterward we can’t help but feel that something holy has happened, and yet we’re in the wake of destruction…to ourselves, to others, our families and homes, our jobs, etc.

We shape fire by what we give it. We limit and hold fire by how we allow it to spread. This starts, this discriminate feeding begins, when we recognize that the ideas of primacy and spirited urgency are fantasies. Recall how we started with the idea of fiery origins? To recall we have to pause, stop, and call something forward that is still “back there.” We can do this too with fire. Fire isn’t literally “first” because origins are “first” a fantasy. Once we move past the literalism of life’s beginnings and endings, once we move past the concrete fire and into the imaginal fire, then we can recognize fire’s self surety, its primacy, it’s “I am firstness,” as an imaginal truth, a characteristic or stripe on its animal fur, rather than a metaphysical statement or ultimate truth claim. To do this means to perceive fire’s relationship with the other elements from the get-go, which is difficult to do since one of fire’s greatest gifts is its all consuming sense of primacy and “firstness.”

One day you find yourself swept up into an intense wave of heated enthusiasm. First you think to yourself, “I need to go running,” or maybe, “I need to go shopping.” The energy is bursting so you have to choose quickly…”I’m here and I come first,” says the fire, “Now let’s go!” You recognize that the fire is indiscriminate and that you have a window of time where you can capitalize on the energy. With a little discrimination, perhaps the result of age and the realization that fire’s “coming firstness” tends to sweep you up in misguided fantasies of what’s important, you step back, remember that the basement needs organizing, and decide to use the burst to get something done that will not only make you happier in the long run, but that will provide you with clearer and more precise options for what to feed the fire next, when it’s next burst comes through. Because, you recall, you stop and reflect, that there is something called a “long run.” The “long run” is the recognition that fire’s fantasy of beginnings and endings is moving within the context of eternity, which has no beginning or ending.

Fire seduces us into thinking that vision boards, right now, when the inspiration hits, will be more productive to our “life goals,” than pruning your closet, cleaning your refrigerator, or writing a thank you note or even clearing your email inbox. Of course it’s not that one is better than another, but fire’s supreme firstness will always try to convince us that its urgency comes before anything else.

Is fire life itself? Fire would have us believe it, and when we see her face, we’re believers.

Fire often makes us feel like we’re in love. Fire as love takes us to that aching place of universal sentimentalism. “The universe told me it was true,” or “the universe aligned everything to happen perfectly.” When all things speak to us in synchronicities, simultanoues confirmations of our destiny or meaningfulness, we should probably check our pants because they are probably on fire. Does that make fire a liar? We say “all is full of love,” when what we mean is “fire is all, fire is first, fire fire, I want fire.”

Fire of course mythically attracts the titan thief, Prometheus. Just like when the wave of energy comes through and we take off shopping, vision boarding, or hearing the voice of the uni-verse (uni means oneness, primacy, firstness), when fire’s primacy convinces us that “I am all there is,” and “let’s have it right now,” is fire not deceiving us with its sulfuric impatience? If we grab the twinkie and run don’t we become like the ill-fated Prometheus, punished by the gods eternally? Chained to the isolation cliffs of our metaphysical ambitions, and forced to have our angry livers plucked out over and over again by a giant bird of prey…the same descending bird of spirit whose image is the dove? The same dove that binds Prometheus back together only to set him up for more torture again by sunrise.

Fire is an angry lover. So vital. So free. So first. But also imaginal. Forming and informing the cosmos of itself over and over again, fed by the presence of what its given, but also given to the idea that it feeds itself alone.

So, today, where will our messiah complex lead us? It led me to write this. Because I tend to feed the fire with writing and reading. The fantasy of progress along the fiery road of writers whose names are written in the stars. The Moon in Sagittarius trines Uranus in Aries and Jupiter in Leo.

Prayer: help us to burn the fire’s firstness in the flames of eternity

I’m Adam Elenbaas, an astrologer, author, and yoga instructor. By blending ancient and modern approaches to astrology, alongside a committed spiritual practice, I help people like you deepen their understanding of life, self, divinity, and destiny within the context of everyday life.